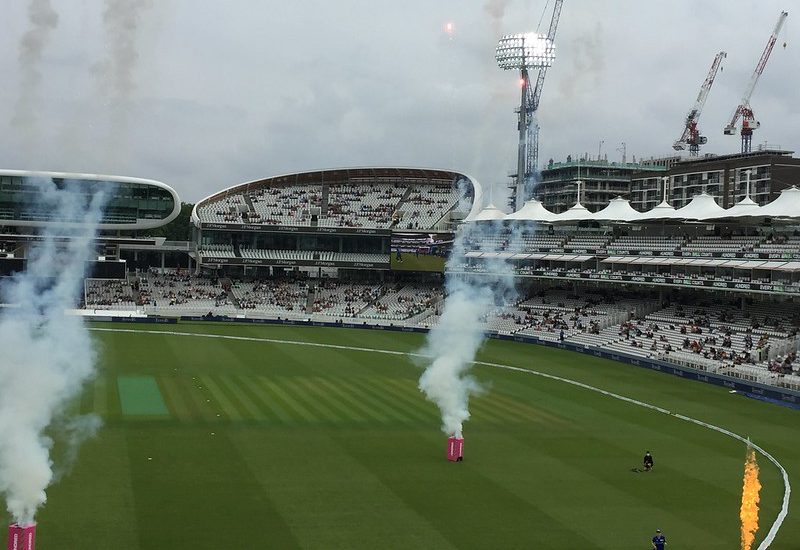 This is the first of two match reports from the inaugural season of the Hundred. Here’s the second one. King Cricket match reports focus on what it was like to be at the game – not the match itself.

Daisy and I resolved to bite the bullet and embrace The Hundred tournament. We arranged to go to the very first The Hundred day at Lord’s.

We were told that the pavilion dress code would be relaxed to “Members’ Friends” stand levels, so I went for the smart casual look depicted. I felt over-dressed. The only other person I saw dressed a bit like me was Roger Knight, who was the only person I recognised in the pavilion.

If the aim was to introduce a different cohort to the Lord’s pavilion, it sure was working. The place was awash with young families with kids. Great stuff.

The London Spirit women warmed up in front of us, looking suitably spirited.

Daisy especially liked her balcony view shot, so I have included it.

We moved round to The Warner Stand after the women’s match and took in the live entertainment atmosphere from there.

The men’s teams then warmed up in front of us, looking seriously pumped and ready to go. The atmosphere was electric…

…so electric that it started to rain, with some lightning and thunder thrown in.

The forecast had been for showers, but my weather app suggested that it would rain all afternoon and evening, which it did. I spotted a suitable point, during which the wet rain became drizzle for a while, so we escaped Lord’s and rescued my car, Dumbo, from the mean streets of St John’s Wood.

Daisy loved her half-day. She wants to go to The Hundred again.