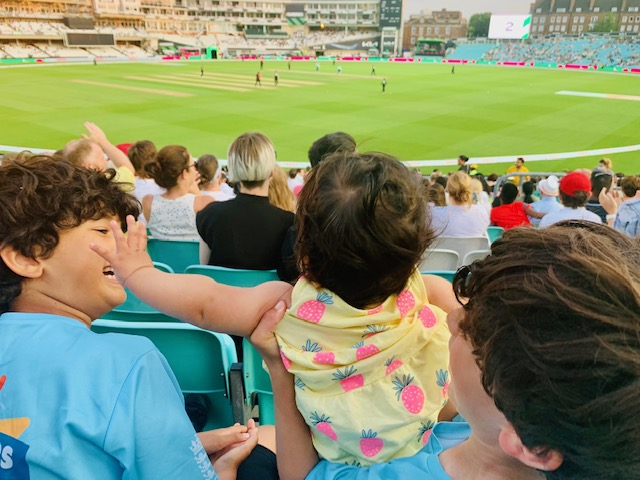 This is our second match report from the inaugural season of the Hundred. Here’s the first. King Cricket match reports focus on what it was like to be at the game – not the match itself.

The afternoon started off slightly stressfully because my husband had a meeting in the City, so I had to take the three children (including a baby in a pushchair) by myself on the train. When we got to the platform there was then an announcement asking people with pushchairs and wheelchairs to ensure the brake was on while waiting for the train. I’m assuming this was aimed me, but I had in fact forgotten to put the brake on so that was a helpful reminder. It has been a long time since I’ve been on the train with a pushchair.

When we arrived at the Oval we were allowed in any gate, which was nice. The app automatically puts your phone up to max brightness when you access your tickets, which is helpful. I had already gone through my usual exchanges with the ground to ask whether pushchairs were allowed etc etc. They are, so long as they don’t block aisles etc, but a buggy park in the outer wouldn’t be the worst idea if they really want families with little children to feel welcomed.

We realised our seats were in the sun. This was a problem at the start, but once the sun dipped behind the Vauxhall stand it was okay. The Oval has been renovated so the outer is much nicer but they could really do with some seating – it wasn’t very easy to feed the baby for example, and it’s not at all easy to do things like that in the stands seating either. I asked for an empty plastic cup to put her food pouch in to make it easier to feed her and was told they cost £1 but then they gave it to me anyway.

It was a very hot day, and I’m glad we weren’t near the flames. On a hot day, cooling water mist would be nicer than flames.

The atmosphere at the game was really fun, with the most diverse cricket crowd I’ve ever been in. There were more families than I’ve ever seen at a game. I also think I saw more people around the ground in bits of MCC regalia than people seated in the Surrey members’ stand (although the members’ stand was much fuller the next day for the men’s game).

In the break I went to get ice creams for my sons. The queue was longer than any of the bar queues. People who want to buy drinks are well-catered-for; others, less so. The ice-cream van had run out of soft-serve so the boys had to have magnums and the younger boy cried at first, but then the ice cream man gave him a free flake and all was well.

Near the end of the game I needed to make up a bottle for the baby and went looking for hot water. But most of the bars that did hot drinks had closed after the innings break. Only the beer/wine bars were still open. This was annoying. Luckily a little van selling what was described as “life-changing coffee” was able to help out.

On the way home out of the ground my middle son stepped out onto a bit of blue-painted road, not realising it was the road. That wasn’t fun and we had to keep a tighter hold of him, so if the ECB is serious about encouraging young families to attend, things like some kind of post-game stewarding around busy roads would be good.

The Hundred is fun, and I was originally deeply sceptical about the “mums and kids” marketing as someone who already takes my kids to the cricket, but on further reflection I realise how much I have normalised and tolerated less-than-ideal situations and told myself it was all fine.

I’ve been shouted at by a steward at Edgbaston for bringing a pushchair (that I had obtained permission for). I’ve had stares and tuts from people at quiet county games and at the Champions Trophy when the children made a noise or when the baby cried. I have also had good experiences (e.g. the MCG which is very family-friendly, and at Lord’s where my tiny two-week-old was treated as royalty and given a room in the press stand).

But to make the Hundred MORE fun for families the amenities available on the day could be better-targeted as it’s still much more suited to adult drinkers. Also, I really could have done with picking my own seats so that we could choose ones that worked for young children, e.g. in the shade, near the aisle.

But we all had a lovely evening and it was far better than a lot of cricket experiences which haven’t been very welcoming to me and the children, and it did feel good to look around a cricket ground and not feel different to other people there. I have long been a proponent of the manifold advantages of watching at home with children compared to going to the ground – if the Hundred can shift the balance even a little bit, I can get behind it.