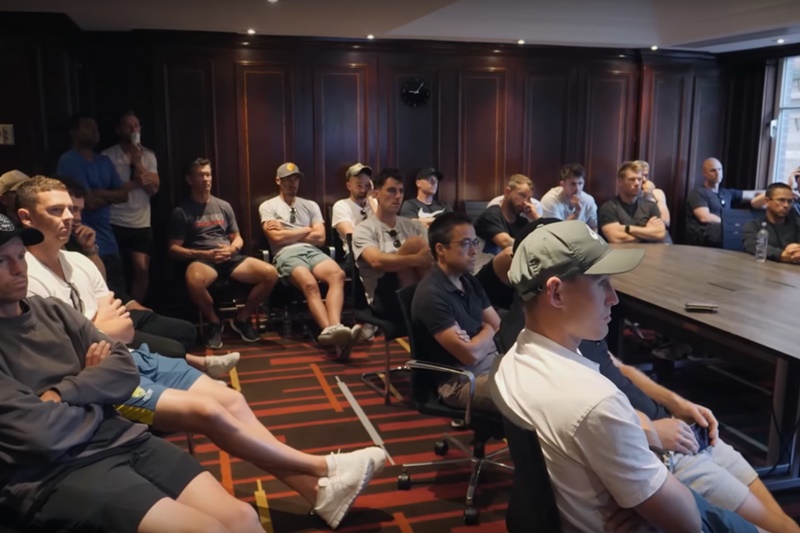 The day after Ben Stokes and Jack Leach at Headingley in 2019, Australia coach Justin Langer forced his players to watch the footage. Thanks to Amazon’s documentary, The Test, we can see how that went down. It did not go down very well. Who was least happy about it?

Cricket commentators sometimes do this thing when certain players get hit where they say it must have been a really bad blow if that specific player is visibly showing that it hurts.

This always annoys us because how can you possibly know that person normally conceals the pain they’re feeling? If they conceal the pain, it’s by definition concealed. The only way we can really gauge the level of someone else’s pain is through their reactions.

So that’s what we’re going to do here. We’re going to look at Australian cricketers’ unhappy faces and try and work out who was unhappiest about watching Ben Stokes tonking them to humiliating oblivion.

Baffled, irritated and frustrated because this is NOT how you do a proper presentation. Why has Langer not used Powerpoint?

Odds that Pattinson is looking at the screen and also seeing what’s on the screen? Zero. No-one has ever looked more staring-into-the-middle-distance than Pattinson here. He is in the room, but he is not in the room.

Both looking the wrong way. David Warner is looking at Langer and using incredibly subtle body language to try and persuade him to stop the video immediately. Marsh is scouring the room for other Mitches and Marshes.

Actually slightly frightening. Stewing. Looks like he’s definitely going to take action against Langer but is thinking really hard about precisely what he’s going to do because he doesn’t want to get stopped before he’s done some real, lasting damage. Will probably end up MacGyvering that water bottle into some kind of weapon.