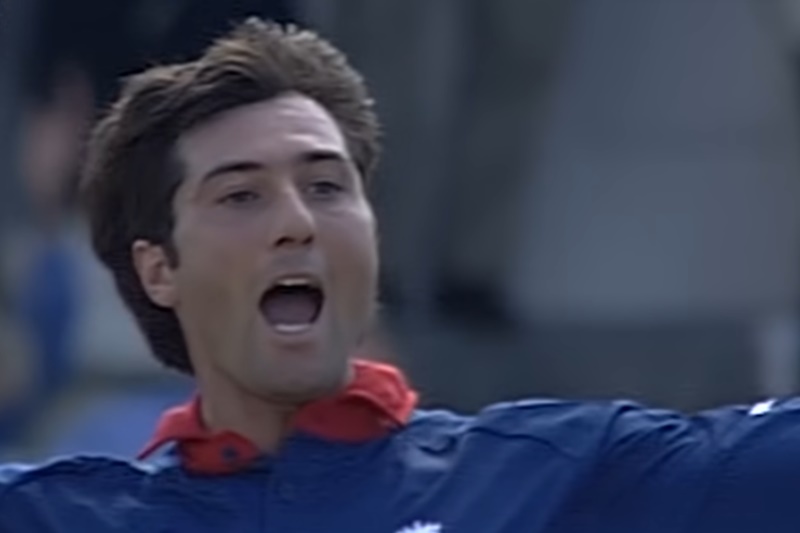 A bits-and-pieces cricketer is a player who wouldn’t warrant a place in the side as a batsman or a bowler but somehow gets picked anyway based on cumulative all-round ability. Let’s try and find England’s purest and greatest bits and pieces cricketer.

Before we get into this, you may be wondering why we’re doing this as an England thing and not as an international thing. ‘What about James Hopes?’ you cry. ‘What about Azhar Mahmood?’

The reason why we’re not doing this as an international thing is because the all-time purest and greatest bits and pieces cricketer is New Zealand’s Chris Harris and that is, quite frankly, the start and end of that debate.

Batting in the lower order and bowling at the slower end of medium-pace, Harris played for New Zealand 273 times. At no point in his entire career did he really warrant selection as a specialist in either discipline.

Harris is useful to us though because Harris is the benchmark. Harris is the player against whom all bits and pieces cricketers will forever be measured.

So which England player gets closest to him?

There are all sorts of things to consider here, but players will definitely get points for…

Multiple international hundreds or five-wicket hauls will rule a player out of consideration. (Harris achieved one of each in his 273 matches, which is a measure of just how far he is ahead of his rivals in this field. ‘Rivals’ isn’t an even an appropriate word to use given his clear superiority.)

As a final point to note before we get into specific examples, we’re giving weight to longevity. Most bits and pieces cricketers come and go. What we’re trying to figure out here is who has excelled without in any way excelling. That nonsensical equation is the nub of things.

As such, we will be listing players’ international appearances. This figure spans all three formats, but it goes without saying that pretty much all of these guys played more one-day internationals (ODIs) than any other format because ODIs are the best place to see bits and pieces cricket.

Nowhere near enough appearances from Snape, but we mention him because he demonstrates to us some of the important raw ingredients. Snape averaged 29.50 in ODIs without ever passing 38 and took 13 wickets without ever taking more than three in an innings. Had Snape continued doing exactly that across a much a longer career, he’d be our man. His Cricinfo profile even mentions a couple of catches he took within the first paragraph, which is exactly the sort of scrabbling for noteworthy feats that a true bits and pieces cricketer should pride himself on. References are also made to his “loopy bowling and smart batting,” which is exactly the sort of stuff we’re after here.

Despite hitting just one fifty and taking only 15 wickets with never more than three in a game, Clarke finished his Test career with a batting average of 32 and a bowling average of 15. It doesn’t really matter that this arises from just two matches. Clarke cannot be our man.

An ODI average of 19.48, plus 16 wickets with never more than two in a game. Feels about right, and two international fifties is probably acceptable within the context of a jarringly lengthy 30-match career. Not bad, but we can probably improve on this.

Ah, now we’re into the big hitters – or, more accurately, the committed nurdlers. Reeve averaged 24.25 in ODIs without ever hitting a fifty (although he did hit one in Tests). He also took 20 wickets at 41 without ever taking more than three in a game. AND he bowled medium pace. Dermot Reeve played 32 international matches because people thought he’d probably ‘contribute’ in some vague, ill-defined way or other. Dermot Reeve is very much in the running.

Irani is in similar territory to Reeve but falls down in a couple of areas. Firstly, he only averaged 14.40 with the bat in ODIs, and this included a fifty. Both of those things count against him. Secondly, his 24 wickets at 41.20 includes 5-26 against India IN THE SAME MATCH AS HE HIT THE FIFTY. Yes, that’s right, we’re effectively disqualifying Irani for being man of the match once. (Click here for the story of Ronnie Irani in Harare.)

One fifty, 25 wickets and never more than three wickets in an innings. But we did once write an article titled ‘Dimitri Mascarenhas is handy down the order’ which gives a hint as to why he is maybe not our man. One time he finished an innings with five sixes off the last five balls and another time he hit four sixes in a row. These acts aren’t technically against the rules that we are literally making up as we go along, but they do seem to go against the spirit of them.

24 ODI wickets at 36.54 while conceding four an over seems about right, but hitting a fifty while averaging 14.92 with the bat is Irani-esque and wrong.

Capel, who sadly died in September, took 38 wickets in international cricket without ever taking more than three in an innings. He also hit three fifties, which would probably have been acceptable if one of them weren’t a Test 98. In summary, while Capel’s batting was poor, but with peaks that were too high and too frequent.

A relatively strong case from Hollioake because while many bits and pieces cricketers tip the selection scales with their capable fielding, he also threw captaincy into the mix and that qualifies as an extra bit or piece. Three ODI fifties and an average of 25.25 is in the right ballpark too. However, his 34 wickets came at an average of 31.84 which is just a tad too good for our taste. Reeve remains our frontrunner.

A solid but unremarkable effort from Yardy – whatever the hell that means when we are literally remarking on how unremarkable things are. The Sussex spinner took 32 international wickets and never more than three in a game. He hit two fifties, both in ODIs, where he averaged 20.37. Confusingly, he won the World T20 in 2010 – which obviously counts against him – but did so while refusing to take wickets, conceding just 6.5 an over. There is definitely something here, but Dermot Reeve bowled medium-pace and we consider that the decisive factor.

Miller took 85 international wickets with one five-for. That sounds like altogether too many wickets until you consider that 60 of them were taken in his 34 Tests matches, where of course he often bowled in two innings, not just one. His Test batting average of 25.80 is excellent, but seven fifties is too many with a top score of 98 not out compounding that.

There are some very good bits and pieces on display if you survey Samit’s international record. He averaged more with the ball than the bat in all three formats and only hit two fifties in total. His 24 ODI wickets came at an average of 45.45 and his one five-for is forgivable given the number of matches he played. His ODI batting average of 32.13 is also very fine given that it is bolstered by only one fifty. All in all, strong work from a committed cricketer – and his Test work was very bits and pieces-y too. Samit may have pushed Reeve off the top step of the podium here.

We’re lumping Tredwell and Croft together because people will suggest them, but really they were spinners who could slightly bat and that isn’t quite the same thing. Tredwell didn’t take an international five-for, but he took five four-fors and averaged under 30 in both Tests and ODIs. Despite a solid domestic record, he didn’t achieve much with the bat at all internationally. Croft’s ODI bowling record (45 wickets at 38.73 and never more than three in an innings) looks like it fits the bill, but again there is no real batting record to support it.

Immediately feels like a contender, but actually his case is not quite so strong as you’d think. For one thing, he took two ODI five-fors – twice as many as Chris Harris. He also averaged 32.79 in that format and 28.70 in eight Tests, which speaks of far too much ability with the ball. Plus despite his billing as an “all-rounder” there is no real batting record to make up for any of that. Bustling medium-pace though – at least he has that.

101 matches! 101 matches in which he did a certain amount of bowling but never once took more than two wickets. Wright also failed to hit an international hundred with six fifties an impressively unimpressive return from that incredible number of appearances. Four of those fifties were in T20Is though, where they’re obviously a bigger deal, and one of them was a 99 not out, which was obviously quite a big deal indeed. But still: Luke Wright played 101 matches for England without ever really seeming like he was a batsman or a bowler.

There’s no fully satisfactory answer here. If you’re asking who has been England’s purest bits and pieces cricketer, we’d have to go with Dermot Reeve. Very few runs, very few wickets, medium pace. He ticks all the boxes.

But then if you’re asking who has been England’s greatest bits and pieces cricketer, we’d argue that Samit Patel and Luke Wright delivered a greater number of confused shrugs over the course of their respective careers.

Patel has to get some credit for offering his bits and pieces across all three formats. But while he gave us 60 matches of cameos and noncontribution, Wright semi-delivered or failed to do so across a whopping 101 matches.

Put it like this: In 50 ODIs, Luke Wright’s two greatest contributions were 52 runs in a rain-reduced no result against New Zealand and 2-34 off six overs in a low-scoring defeat against the same opposition.

The two wickets he took in that match were Kyle Mills and Tim Southee.

Luke Wright has been England’s greatest bits and pieces cricketer.

Why not sign up to get our articles emailed to you? And if you already get the email, how about joining the fine folk who are chipping in a couple of quid each month to support the site on Patreon? Pledges help us do more features like this. You can flip us a shiny coin or buy us a pint each month here. Don’t feel you have to, but huge thanks if you do.