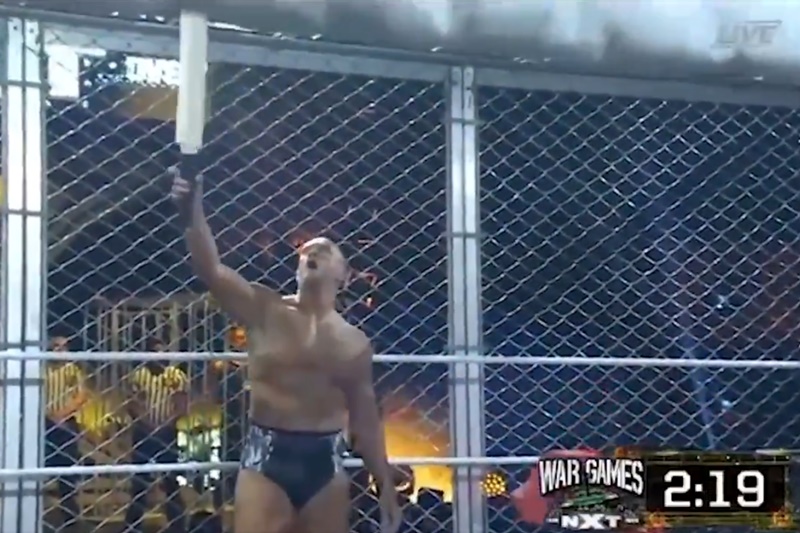 Send your pictures of cricket bats and other cricket stuff in unusual places to king@kingcricket.co.uk. Feel free to put the cricket thing in the unusual place yourself. (In fact please, please, please do. No-one sends us any of those and they’re our favourite ones.)

Today’s cricket bat in an unusual place is from NXT TakeOver: WarGames, a WWE thing that happened at the start of the month.

The main event saw The Undisputed Era take on Team McAfee. (Somewhat disappointingly, the latter team aren’t bound together by their shared love of internet security. McAfee just happens to be the surname of one of the wrestlers.)

Midway through the match, Team McAfee’s Danny Burch – who is a Londoner – whipped out a cricket bat. As you can see in this video.

After one swing, he inexplicably ditched it.

For a while, everyone ignored it, but then his team-mate Pete Dunne (who is from Birmingham) picked it up.

At the exact same moment, something fully marvellous happened: Burch whipped a second cricket bat out of his kit bag and then held it aloft pretty much exactly like He-Man.

Then he did what He-Man definitely would have also done had he been holding a cricket bat instead of a big sword – he kissed it on the face.

Danny Burch definitely wishes he could have been Kim Barnett or Anthony McGrath or someone instead of Danny Burch.

After that, Burch and Dunne proceeded to use their cricket bats completely incorrectly.

Team McAfee somehow managed to lose the match. One of The Undisputed Era’s wrestlers did a diving knee drop onto a chair placed over the face of one of the McAfee wrestlers and apparently that’s how you win.

Hat-tip to Stephen for bringing this to our attention.