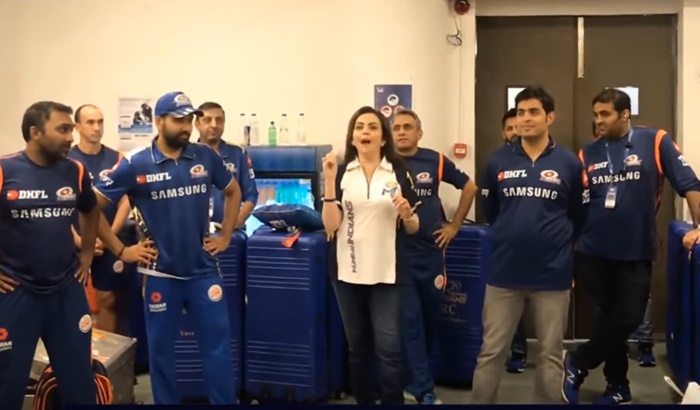 Yesterday we mentioned our grim office job at a company that was dying on its arse. It later occurred to us that Cricket Fever, the Netflix documentary about the Mumbai Indians, might be the reason why this particular slice of our working life had resurfaced uninvited in the ooze of our consciousness.

You wouldn’t think that over-pressured underpaid work in a tinpot digital marketing firm would have much in common with being a cricketing superstar, but let us assure you right now, it absolutely does. The reason is Nita Ambani.

Who are you again?

Tinpot web marketing firms have one major thing in common with soulless T20 franchises and that thing is eye-wateringly high staff turnover.

There are two main effects of this.

A famously great way to fail to make people care about the team/firm that they work for is through team-building exercises.

At our tinpot web marketing firm, team-building mostly involved heavy drinking. This doesn’t immediately sound so bad until you recall that we said it was a “sales-led company” with a “sales-led” culture. Heavy drinking basically just meant that eventually the police arrived because somebody or other had been accused of a sexual offence. (This one time every single member of our department decided that they didn’t want to go to a Friday afternoon party thing that had been organised to try and build morale and we all got into tremendous trouble for it. Ain’t no party like a mandatory party.)

At the Mumbai Indians, team-building exercises are considerably less sordid, but no less excruciatingly awkward.

In Cricket Fever, they have a treasure hunt around the Ambani home, while in a recent YouTube video, they play table tennis…

… and do something-or-other with sticks.

But the real reason why the Mumbai Indians documentary reminds us of our time working for a tinpot web marketing company is because (a) there is an awful lot of losing and (b) every time that you lose, someone with a huge financial interest gives an earth-shatteringly dull and empty and long-winded speech and steals part of your life from you.

You know, this kind of thing.

This happens A LOT in Cricket Fever and having just trawled through the Mumbai Indians’ YouTube feed, it looks like there would have been plenty of pep talk footage on the cutting room floor too. You wonder how they find the time to practise cricket.

“Okay, gather round everybody. I just want to say a few words.”

It’s usually Nita. She says things like, “I don’t think there is a word called ‘impossible’ in the language of the Mumbai Indians,” and she talks about the franchise’s legacy, and what it stands for, and how they’re all a family.

Most of all she just goes on and on and on. They’re speeches with no direction, no point, and you just have to sit there and listen to her as she eats away more and more of the short and precious time you have on this Earth.

Imagine being Jasprit Bumrah listening to that shit. You’ve just taken 3-20 off four overs. You’re the actual man of the match and Nita Ambani swans in and says you have to share the award with Pankaj Jaiswal because he did a really good job of watching.

In another video, Nita hands out “badges of honour” and Yuvraj Singh – Yuvraj Singh, a man who’s won the actual World Cup – has to go and collect one of them.

And then. And then! He has to “say a word” about being the guy who had to go and collect a badge. Model professional that he is, Yuvraj phones it in. He says the team has to “take the positives” and that “it’s important to be together and be positive.”

Then everyone claps him while Kieron Pollard looks bored and checks his phone.