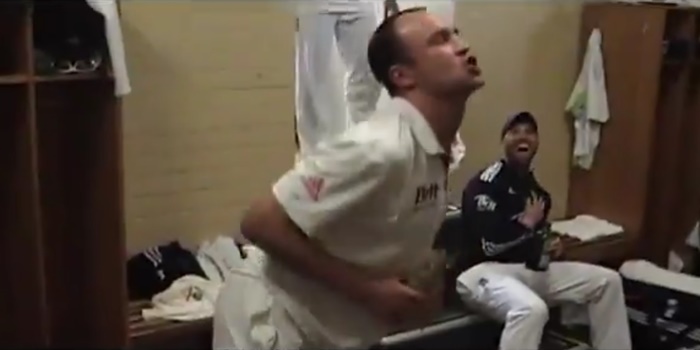 The Edge is a 1997 film starring Anthony Hopkins, Alec Baldwin, Elle Macpherson and Bart the Bear, a kodiak bear who also starred in Legends of the Fall among other things (actual fact).

It is a lost-in-the-wilderness-getting-hunted-by-a-kodiak-bear film.

The Edge is also a 2019 documentary about the last England team to get to number one in the world but which then fell apart.

You can watch the trailer here.

Because honestly, if that was how he gave his team talks, we would have taken in precisely zero information. We were a word ahead of him throughout and would definitely have joined Kevin Pietersen in staring out of the window daydreaming. Life is short, Andy! Pick up the pace.

3. What in hell is Jonathan Trott doing?

4. Do the film makers own a spirit level?

We’ve a strong suspicion that no England changing rooms were built at this angle.

5. Who was the groundsman responsible for this pitch?

What is that? Corduroy or something? If so, who’s the tiny batsman?

6. Who will deliver the finest ‘tough times’ reaction shot?

A staple of all serious documentaries is the bit when the interviewee talks about a difficult time and then the camera lingers on them so that you can see the raw emotion. Alastair Cook is clearly doing a very good job of that here, but his team-mates will doubtless make their own attempts. Who will be the best/most overwrought? (We also get to see Andrew Strauss gazing mournfully to the heavens and Ian Bell staring glumly at the ground. Then we get to see Graeme Swann give a big shit-eating grin because Graeme Swann has his own thing going on.)

7. Where is Monty Panesar?

It’s so dark and the footage is so grainy we can’t really make it out. It looks like Monty’s polishing glasses on a wood-panelled Mississippi paddle steamer. Possibly one that doubles as a casino.

8. Just how monumentally annoying was that pre-Ashes boot camp?

9. How did Chris Tremlett get a bruised rib?

We get a very brief glimpse of two people having a fight. One person is being lifted in the air and is really scrabbling madly, like Scrappy Doo. The other guy is not. We can only presume this is the legendary fight that entirely predictably left Jimmy Anderson with a broken rib and completely inexplicably left Chris Tremlett with a bruised rib?

How much ‘sprinkler’ will there be?

Because we can only take a finite amount. In all honesty, we’re a bit sprinklered out just from the trailer and the trailer features almost zero sprinkler.

If you enjoy King Cricket – in particular these features – and you feel it’s worth a quid (or the cost of a pint) each month, please consider becoming a patron. The more patrons we get, the more we can do with the site, so it’s hugely helpful and greatly appreciated.