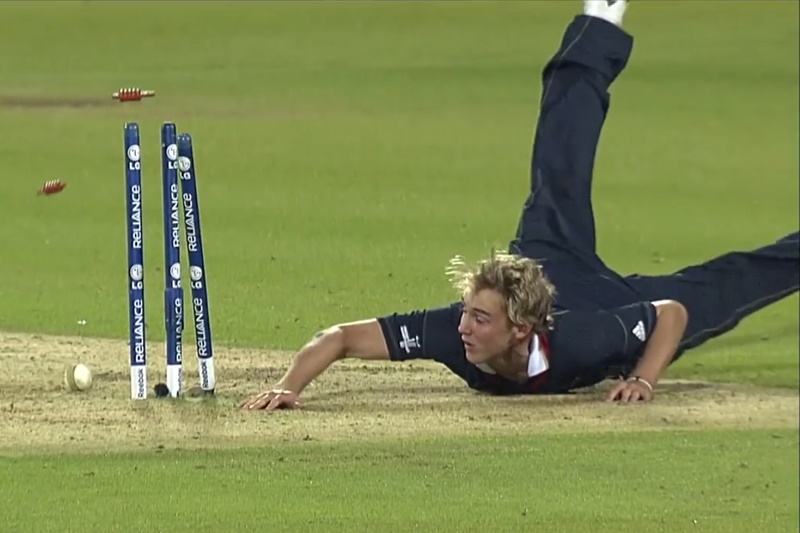 Our main memory of the Netherlands’ win over England at the 2009 T20 World Cup is that the final over was utter madness. Let’s take a look back and see whether that was really the case. (Spoiler: It absolutely was.)

2009 is a funny old time when it comes to limited overs cricket – somehow both fairly recent and also long ago. It’s strange to think that several members of England’s current white ball teams were also involved back when when there was a real bone-deep haplessness about those sides.

T20 is so young that 12 years is a very long time. They didn’t even call it a T20 World Cup back in 2009. They called it the ICC World Twenty20. The format’s only been played internationally since 2005.

We always like a bit of cultural context and the most striking feature of 2009 to our eyes was that it was a really weirdly great year for US sitcoms. Both Community and Parks and Recreation began in 2009 and so did Eastbound and Down.

The last of those began so perfectly that we can’t help but devote a few paragraphs to it. This is an entirely acceptable thing to do because (a) the show is about sport and therefore vaguely within our remit, and (b) it’s brilliant.

The start of Eastbound and Down’s first episode was perfect and the very first line unimprovable: “When my ass was 19 years old, I changed the face of professional baseball.”

We don’t know how many times this was rewritten, but in just a few short words it tells you almost everything you need to know about the character of Kenny Powers. He is not a man who will say “when I was 19 years old” if he could instead say “when my ass was 19 years old,” he is ridiculously melodramatic, and he is a man with an ego that cannot be constrained.

Then you see him and it’s Danny McBride with a mullet.

The series took a few missteps, but that ego is what makes Kenny Powers such a marvellous sitcom character. It is so big and irrepressible that you can put him in any grim life situation and he’ll always find his way back to arrogant entitlement eventually. And he will never learn any lessons. Powers sees his life as a film with all of the disappointments and failures just scenes building towards an inevitable heroic climax.

Powers is so grotesque, he’s beyond any specific sportsman, but we do find ourself thinking about him from time to time when some cricketer or other is past their best or their confidence is edging towards delusion. We think that’s a sign of a good character.

His sense of exceptionalism and inability to learn were also defining qualities of England’s limited overs sides for a long time.

(The Eastbound and Down title music is magnificent too, by the way – Going Down by Freddie King. You can see a compilation of intros here that show how it’s used. Be warned that there’s strong language pretty much throughout the video.)

The first match of this tournament, on June 5, was between England and the Netherlands at Lord’s. Coincidentally, this was also the day that we unveiled The Greatest Post of All Time. Or, actually, not that coincidentally at all.

Because this was the England team.

Yes, that’s right. Rob Key was representing England in a World Cup. We are pretty confident he was selected on the strength of his bat-throwing tantrum on 2007 Twenty20 finals day and also for his panther-like qualities in the field (bit sleepy, not really interested).

It’s also striking that this England team features two T20 World Cup winning captains and England’s finest white ball bowler of recent times. That’s quite jarring when you think about how implosive they were.

Dirk Nannes and Ryan ten Doeschate stand out in the Netherlands XI, but Tom de Grooth would go on to be player of the match.

When Bopara was out, they pushed Key down the order and this is where things went wrong. Our man eventually came in at six and made 10 not out off 8 balls, but England scored just 62 runs off the last nine overs.

In response, the Netherlands consistently stayed in control of the required run-rate, despite the loss of wickets.

England started to shite their pants. The chase was marked by several instances of botched fielding which climaxed with the Netherlands requiring seven runs off the final over.

Paul Collingwood saw fit to ask Stuart Broad to bowl that over – Stuart Broad with his natural predisposition towards making any situation even more ridiculous and chaotic.

It was an excellent choice.

We knew this over was silly, but the detail had rather faded. Watching it again was a delight.

Ten Doeschate hits the ball into the ground and it goes basically nowhere but the batters run anyway. Broad fields and tries to run Ten Doeschate out but misses. One run.

Edgar Schiferli (great name) hits a similarly duffed shot into the turf and again the batters try for a run. Broad parries the ball and it drops behind him. He gathers it and – perhaps lacking confidence in his own throwing after the previous passage of play – opts to Jonty Rhodes the stumps over to ensure the run-out.

Unfortunately/hilariously, the TV review reveals that Broad lost his grip on the ball when he belly-flopped to the turf with his hand two inches from its destination and he in fact broke the stumps with an empty hand. One run.

Broad bowls a full toss. Ten Doeschate loops it straight back at him after only managing to make contact high up on the bat. Broad drops it. One run.

Straight through to the keeper. The batters run anyway. James Foster misses the stumps. Broad pounces on the ball mid-pitch with a view to having a dart at a run-out at the other end. Fortunately for him, he fails to gather. We say fortunately because any ensuing run-out effort would 100 per cent have ended in overthrows. One run.

We’ve got the luxury of time when we look back on all this, but in the moment things were very intense and everyone was struggling to process all the various what-might-have-beens that were happening.

This is the only real false note in what was otherwise a quite magnificent over. Ten Doeschate larrups rubbishly and it goes straight to mid-on. No-one does anything particularly demented. One run.

But then say what you like about Ball 5, but it did get us here. Dot ball an England win, one run a tie, two runs or more a win for the Netherlands.

It begins with Broad and James Anderson discussing what to do for what feels like about 47 years, immediately after Broad and Paul Collingwood have already discussed what to do and presumably having reached no conclusions.

After a few more meetings, Broad bowls and Schiferli hits yet another scuffer straight back to him.

Even though he’s lying down, Broad goes for the run-out that would win England the match rather than the safer ball-in-hand scuttle that would prevent a second run and ensure a tie.

Needless to say, he misses. The delighted batsmen run a second from the overthrow and then everyone wearing orange goes absolutely frigging nuts.

Nasser Hussain later said that Broad had gone for the stumps because he was ‘a winner’. As we pointed out at the time, in missing three run-outs and dropping a catch in that over, he didn’t seem an especially keen winner – just a man with a mind for victory and an arm like a puppet.

Sometimes when you bring the thunder, you get lost in the storm.

We didn’t think this over could possibly live up to our woolly memory of it, but it absolutely did. “When fielding goes wrong” is probably our favourite brand of cricket.

In truth England’s bigger failings came before this over, but those other elements are a lot less fun to talk about. We wouldn’t necessarily criticise Broad too much either. He bowled pretty effectively and none of his fielding efforts was insanely dreadful when taken in isolation. It was just that all of it came in one over because the situation had necessitated near-suicidal running from the batters. Cumulatively his fielding was very bad.

England actually beat Pakistan two days later to go through to the next phase of the tournament but after losing to South Africa and beating India, they went out after the West Indies’ target of 162 was revised down to 80 runs off 9 overs following rain. Pakistan beat Sri Lanka in the final.

If you like the features we do here at King Cricket and you’d like to see more of them, please flip us a coin or buy us a pint each month via Patreon. To accidentally and unwillingly quote Morrissey, these things take time. Put simply, the more Patreon backers we get, the more we can do. Cheers.

You may also want to sign up to get our articles emailed to you (which you can do for free without becoming a patron.)