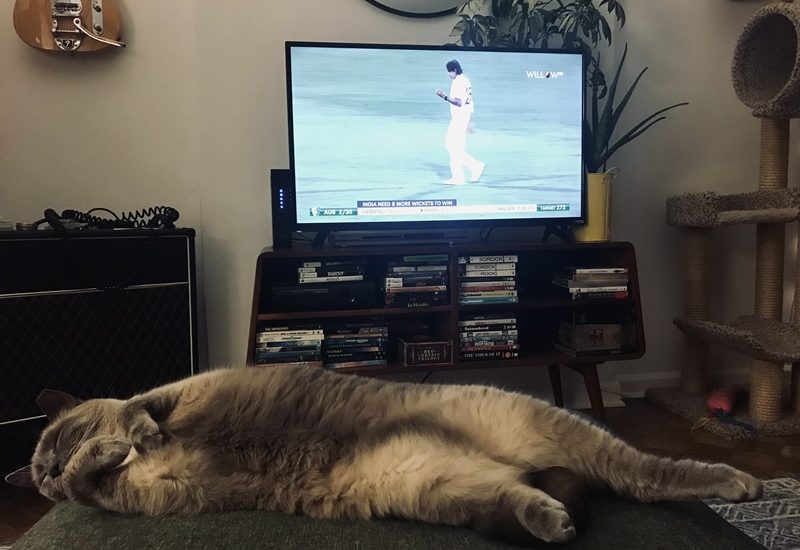 If you’ve got a picture of an animal being conspicuously indifferent to cricket, please send it to king@kingcricket.co.uk.

It seems to me that Jhulan has the easy action of a Glenn McGrath with the longevity of a Jimmy Anderson and the batting approach of a late-stage Stuart Broad, and also smiles much more than any male player I can think of. I worry ever more that he has scant interest in the longest form of the game. I just don’t know what I did wrong. I showed him the YouTube videos of David Gower and Michael Holding and Shane Watson’s Front Pad at their respective zeniths. He showed me his empty, fluffy balls.

Further fuelling this fear, he was also fairly rapt watching Kent win the T20 Blast a couple of weeks ago, but that was largely because I was shouting and jumping around so much. (Which is why I have no photographic evidence, but rest assured, he was very struck by Jordan Cox’s fielding antics.) Immediately going out for dinner and trying to explain to one’s Franco-Californian in-laws that this is the greatest Kent team since the halcyon days of Carl Hooper and Alan Igglesden was a frustrating endeavour. (I grew up running on the outfield to get Aravinda de Silva’s autograph and doing school projects on Kent’s Great Wicketkeeper-Batsmen. You can see why I was needed in America.)

P.S. I am fully aware of how mental the above sounds. I suppose sounding mental is the price of being a cricket fan these days. On top of the actual prices, obviously.