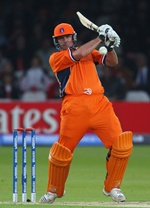 Is there anything on earth that can’t be improved by the presence of a fat man who achieves his ends using amateurism and brute force?

Anyway, Darron Reekers taps into this universally appealing modus operandi. He’s about 20 foot 11, a bit fat, and every now and again he ‘has a go’. With his first shot of any purpose against England, he holed out. Or at least he should have done. He took his eyes off the ball, got in a terrible tangle and spazzed the ball vertically. For six.

The man has power to spare. That power comes from his girth.