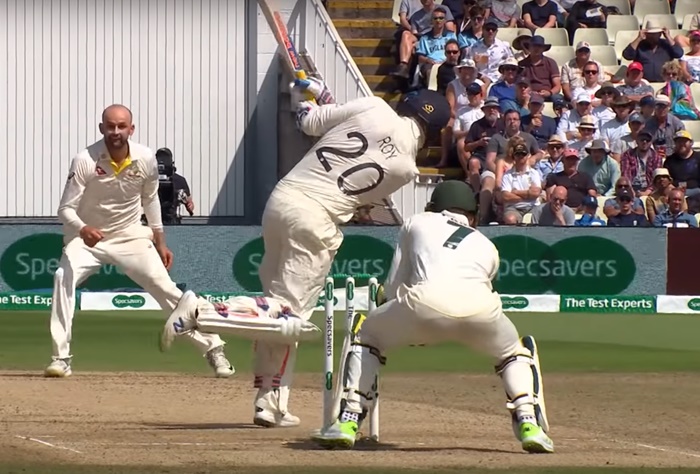 Do you know the only way you can successfully ‘dig in’ as a batsman? Completely and utterly mindlessly. Any other approach is far too much mental hard work and means you’ll make a bad decision sooner rather than later.

We wrote a long thing for the Nightwatchman, Wisden’s quarterly publication, about the psychology of digging in recently. It’s not out yet, but you can order it here.

Not many people wanted to speak to us about the subject, which was weird. Maybe it’s too abstract a subject for the experts to really hold forth on.

Fortunately, one person was willing to speak to us and that person was AB de Villiers.

Now you might think that AB de Villiers is a terrible person to speak to about digging in because he’s Mr All-Of-The-Shots, isn’t he? He’s the guy who once made 149 runs off 44 balls against the West Indies in under an hour.

But AB de Villiers is actually the perfect person to speak to because he is the most aggressive batsman to have also played a pure out-and-out rearguard.

In November 2012, de Villiers made 33 off 220 balls so that South Africa could save a Test against Australia. In 2015 he made 43 off 297 balls in almost six hours of batting, attempting something similar against India. (South Africa lost that one.)

An AB de Villiers rearguard probably tells us more about how a normal batsman might go about digging in, because adopting the Shiv approach would demand going back in time to spend six hours a day on the bowling machine and that’s not really an option.

So what did AB say?

After a bit of guff about ‘motivation’ and ‘passion’ he said that those two rearguards were really just “an extreme version of my basics”.

He was talking technically primarily, but the point is that he saw those innings as being at one end of a continuum and not something ‘other’ – which is how batsmen often seem to approach the task of stonewalling.

AB does in fact practise this sort of thing. Every day.

“I just play 10 to 20 balls where I just do that: I literally let the ball almost hit me before I just block it dead. I feel it’s the best possible position I can get in as a batsman.”

You might be thinking that that was the kind of thing he did in the nets before a Test match and that he doesn’t bother any more. But no.

“I do these drills every single format, every single game I play in. It’s not about what shot I’m playing; it’s literally just seeing the ball and letting it come to me, almost allowing it to hit my stumps before I play it. Once I’ve done ten of those, I’m ready to play in any format, anywhere in the world.”

There are a lot of different clichés about just playing the ball and not overthinking things. ‘Watch the ball’ is the oldest. ‘Play each ball on its merits’ is another. ‘See ball, hit ball’ is a newer toddlerspeak one, but it’s based on the same principle.

All of these things say that conscious thought is your enemy.

The Nightwatchman piece has a lot more about the psychological explanation for this, but we’ll not get into that here. All we really need to know is that when it comes to reacting, conscious thought is only going to trip you up. Whatever your ability, whatever the sport, most people will recognise that they play best on autopilot.

We put this to de Villiers, who said: “Spot on. When I see the ball, I let it come to me and I just play it – that’s when I’m at my best. So I always try and remind myself [of that] with every innings, with every practice session, with every warm-up I have.”

For him, all good batting is based on that principle. “When I play T20s, I do a similar sort of thing. It’s just a lot more attacking,” he said.

In short, any batsman who thinks to himself, ‘Right. I’m going to make a really conscious effort to dig in,” is not likely to play a long innings. The extra thoughts tend to get in the way of what comes naturally and they’ll also rapidly drain their mental reserves. (Quick example to explain that last point: your first day in a new job is always exhausting because of how much conscious thought it demands.)

So how the hell can a batsman dig in?

It’s not a matter of passion or pride or any of that bollocks. It’s a psychological skill; an ability to play in a manner appropriate to the situation in the most mentally efficient manner possible.

That’s a really tricky thing to do and it means that digging in is best delivered by two types of batsmen: the ones who pretty much play that way anyway and the ones who’ve already experienced a wide range of situations and have learned to adapt their game almost effortlessly.

The one thing we really want to emphasise to the ‘dig in’ brigade; the ‘show some commitment’ crew (a group of people who seem to use words like ‘pathetic’ and ‘disgrace’ a hell of a lot more than the average person), is that this is not something you can switch on at will. It’s almost the opposite really.

Trying to dig in is like trying to see one of those Magic Eye pictures from back in the day. The more you force it, the further away you get.