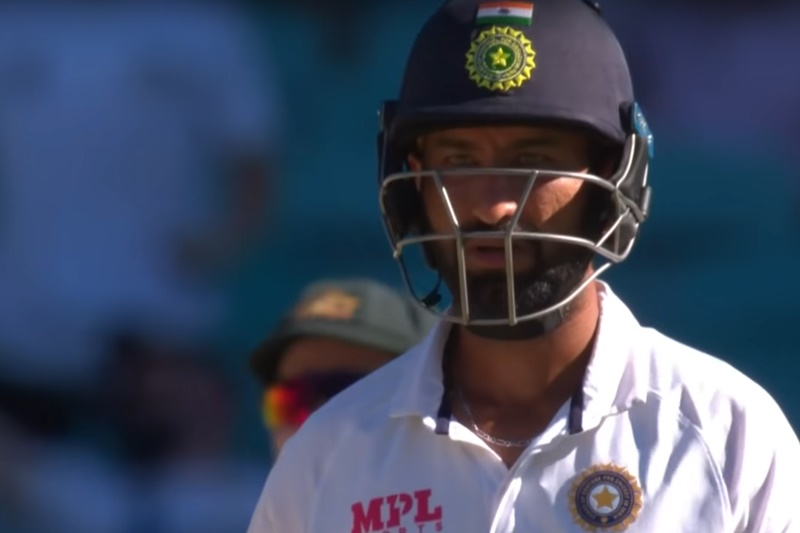 Please can we tell you why Cheteshwar Pujara is so special. It’s too do with how little he thinks.

Most of us are waging a war against conscious thought at the moment. Holed up with the same people we’ve been cooped up with for most of the last year, good intentions generally get us through most of each day, but then at some point – inevitably – someone’s ability to suppress their tetchiness will run out.

Maybe your partner says something in very slightly the wrong tone of voice. Maybe the cat stands on the keyboard while you’re trying to write. Maybe you knock something down the back of the microwave and why the bloody hell do we have so much crap balanced precariously there anyway? Maybe you’re lucky enough to have a toddler who will routinely serve up elite unreasonableness and therefore selflessly serve as a lightning rod for everyone else’s breaking points. (E.g. “No! Bendy Man doesn’t want to go in the juice.”) Or perhaps you yourself are the annoying one and everyone keeps going off their heads at you.

The fact is, there’s only so much you can hold yourself back. In a difficult situation, there’s only so long you can will yourself to sashay through the day with a spring in your step and a song in your heart. Eventually your mental efforts will start to tell. The trick, really, is to acknowledge that; to cut yourself and everyone else some slack and start afresh the following day when your fuses are momentarily lengthened.

Our point is this: Mental reserves are finite. Consciously making an effort to do something is exhausting.

This is why, when you’re batting for a draw, batsmen whose autopilot mode involves eschewing risk are gold dust.

Playing a rearguard innings is primarily a psychological skill because it is not just about playing in a manner appropriate to the situation. It is also about doing so in the most mentally efficient way you can.

Any batsman who thinks to himself, ‘Right. I’m going to make a really conscious effort to dig in,” is not likely to play a long innings because people simply don’t have the psychological energy reserves to operate in this way for any length of time.

There’s a lot more about why exactly this is the case in a Nightwatchman piece we wrote about the subject in 2019, but the upshot is that to bat while minimising risk for any decent duration, you have to be able to do it unconsciously.

This sounds like science fiction, but it’s entirely possible. Have you ever lost yourself in a protracted daydream while driving a familiar route? Driving a car is a complex task, but once you’ve mastered it, the various processes can become unconscious and consequently far less mentally draining.

Pretty much every cricketer who bats for a living operates in the same way. They are good precisely because so much of the job has become second nature.

One key difference between different batsmen, however, is what form that autopilot batting takes.

We’ve previously written about the psychology of batting for a draw in an article we titled ‘the cult of digging in‘.

The headline reflected the fact that the piece was aimed at a certain brand of England fan who fetishises rearguard batting and who sees an inability to play defensively for an entire day when circumstances demand it as almost a moral failing.

The interesting thing with Cheteshwar Pujara is that criticism of him is almost the exact opposite.

A lot of this stems from comments made by Virat Kohli in 2016. One of Kohli’s comments was: “Pujara is someone who absorbs the pressure really well, but after a certain stage in the innings there comes a time when the team needs runs.”

He wasn’t exactly slagging Pujara off, but those sorts of quotes take on a life of their own once they’re reported. Probably those words just encapsulated what a lot of people already felt about him, even if it didn’t really convey the nuance of Kohli’s full view of his team-mate.

Since then, Pujara’s regularly been criticised for his passivity. An awful lot of people would like to see him consciously try and bat differently.

The thing is, asking Pujara to consciously try and bat differently is like asking Wolverine not to heal so quickly or asking Spider-Man not to climb on things. Unconscious batting is Cheteshwar Pujara’s superpower.

When we spoke to AB de Villiers about rearguard batting, it seemed as if one of the secrets of his success was that he’d streamlined his thinking in such a way that making 33 off 220 balls required no greater conscious thought than his more familiar attacking batting.

This is perhaps a level of adaptability for all batsmen to aspire to – but it’s not as easy as just copying de Villiers’ methods because others’ gameplans aren’t necessarily built on the same foundations.

‘Just play the ball late and everything flows from there’ may work for de Villiers, but it probably won’t pan out for a different attacking batsman whose default practice session is something other than facing 10-20 balls where, “I literally let the ball almost hit me before I just block it dead.”

Similarly, if your reflex shot is a forward defence and you approach an innings with a mentality of, ‘I’ll just play the ball late and everything will flow from there,’ you’ll most likely end up with nothing more than an awful lot of forward defensive strokes.

But then sometimes that’s kind of what you want.

Effortless risk-averse batting can be a strength

Che Pujara is probably the most efficient endurance batsman in the game right now. He doesn’t have to suppress his desire to play higher risk shots. That’s just how he plays. And precisely because that’s just how he plays, he can continue playing that way long after others have snapped and played a riskier shot.

Pujara paces himself basically. He rations his mental energy reserves and bats the distance.

When it’s day two and the pitch is flat and he’s plodding, Pujara’s approach can seem annoying (although it’s still not exactly a disaster).

But then every now and then, all that really matters is how many overs a batsmen can survive. In that scenario, other batsmen make an effort, and in making that effort they exhaust themselves.

Pujara though? He’s digging in effortlessly. His conscious mind is untaxed.

Cheteshwar Pujara can bat for a draw on autopilot.

If you enjoyed this piece, why not sign up to get our articles by email?