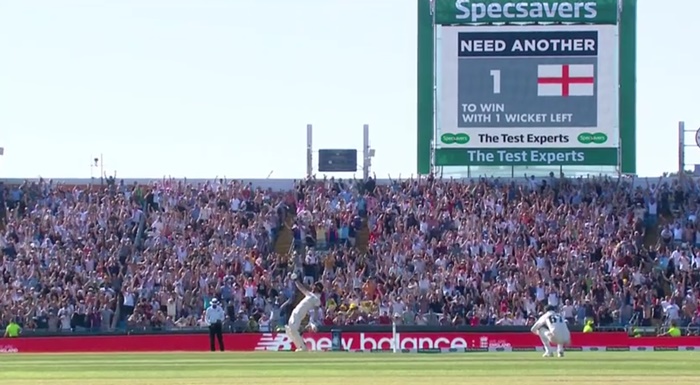 One of the most exciting scenes involves Javier Bardem’s Anton Chigurh tossing a coin.

Heads or tails is not an especially exciting thing in itself. This coin toss is exciting because there’s something riding on it. Quite a lot in fact. No-one states it explicitly, but it is very clear that for this particular coin toss, the gas station attendant’s life is at stake.

Imagine that. A coin in the air and just two possible outcomes, one of which is unthinkable.

Watching the film, you feel this. It’s horrible, but it’s exciting.

It was pointed out to us recently that we use the word ‘jeopardy’ a hell of a lot more than the average person. Despite this, the word is almost exclusively reserved for when we’re talking about cricket.

Jeopardy is at the heart of cricket drama. It is the reason why a six during a Test match run-chase with nine wickets down is infinitely more exciting than a six in the first over of a limited overs match.

Test Match Special commentator Jonathan Agnew put it best at the end of the 2019 Headingley Test. England were eight runs from victory and Australia were one wicket from victory and Ben Stokes had just launched the ball into the air.

“It’s six or out…” he said, and as the ball sailed through the air, all we could do was ponder which.

Imagine that: the ball in the air and just two possible outcomes, one of which is unthinkable.

Watching or listening, you felt it. You felt it so much more because of what was at stake. It was horrible, but it was exciting.

A six is not a six

The shortest formats are specifically engineered to encourage batsmen to try and hit sixes; to make them feel safe to do so. With ten wickets to use in 20 overs (or 100 balls), they can hit with near impunity.

But you can’t buy excitement so easily. By reducing the jeopardy, you also diminish the six. It’s not the fact that it arrives more frequently – it’s because of what’s at stake.

Imagine that before he tossed the coin, Chigurh had told the gas station attendant that it wasn’t all on this one toss; that he was willing to give him a good few chances and he’d toss several times.

This is not to lay into the T20 format like there’s nothing of merit there. The aim here is to celebrate Test cricket and point out that its epic nature and long hours are precisely what help it transcend other sport.

You can’t strip away all but the most exciting 100 deliveries and expect a match to feel the same.

There are no shortcuts. Context is everything.

Take Ben Stokes, for example. The Ben Stokes story starts way back, but even if we limit it to this one Test match alone, he has a back story.

He is the guy who played a shit shot in the first innings when England were bowled out for 67.

He is the guy who bowled a leviathan of a spell and took crucial wickets when England found they were running out of fit bowlers in Australia’s second innings.

He is also the guy who had made three runs off 72 balls before he finally hit a boundary.

It all matters, but that last one is the biggie really. Taken in isolation three runs off 72 balls is not especially exciting. It was, in fact, excruciating to watch and doubtless just as excruciating to produce.

Superheroes are dull when they can do anything. The most memorable heroes are human and vulnerable. Cricket delivers this brilliantly because it always has the least competent batsman at the crease when the stakes are highest.

If you’re going to fail, fail early, because there is nothing more painful than getting close and losing. Nine wickets down, one shot from victory, both teams are as close to victory as it is possible to be. With all the work to get to that position, all that emotional investment, losing doesn’t come more painful.

Precisely because of this, the tension rises. Tension rises and the guy who’s batting now is the worst batsman of all – which only raises that tension further.

Number 11s are elite cricketers. They are elite bowlers who are also obliged to do a job for which they have no exceptional competence whatsoever.

They are fallible. This is why nine-wickets-down jeopardy is the greatest sporting jeopardy of all.

A top order batsman might thrill you with a lofted drive, but every single delivery a number 11 faces is a coin in the air with everything at stake. And in a Test match, it can go on like this indefinitely.

On day four of a five day Test match, there was no deadline in sight for Jack Leach. He had to block, he had to survive, and he had to keep on surviving while Ben Stokes accelerated time from the other end.

That No Country For Old Men scene is four minutes long and we don’t see the gas station attendant beforehand. All we know of him is what we see in that scene. That’s our entire emotional investment and yet those few seconds before he calls heads are excruciating.

A Test like Headingley 2019 provides a lot more back story than that, but the protracted tension of the climactic moments feeds into our emotional investment too.

Ben Stokes and Jack Leach batted together for an hour and every minute of that hour was more exciting than the last.

Heads or tails, we wondered.

If you enjoyed this article, why not sign up for our email? Find out all about that here.