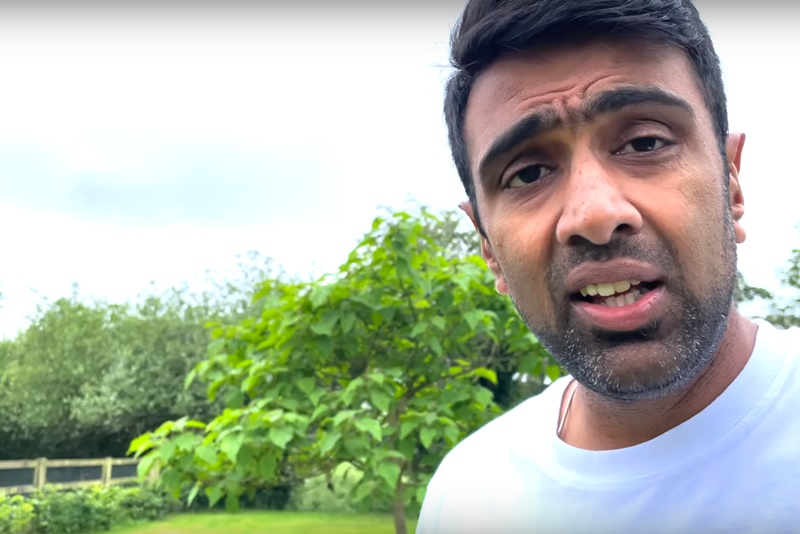 R Ashwin is a man who very much ploughs his own furrow. We like this. We like R Ashwin. Recently R Ashwin went to Devon.

The world of cricket has changed a lot in quite a short period. It’s hard to put the change into words, but basically the top cricketers don’t really do normal things any more. They live in skyscrapers above the clouds, disconnected from the rest of us. They’ll probably be downloading their consciousness into new bodies and living eternally before too long.

Once upon a time things were very different. Once upon a time – within the lifetime of this website – elite cricketers advertised shovels for burying sheep. You don’t get that kind of thing any more. Players can afford to be choosy about commercial stuff. They weigh things up in terms of the impact on their own brand.

If R Ashwin has a brand, it is the guy who is unfathomably great at cricket but who is also still interested in the wider world. Going to Devon is a small thing, but it is not a thing that most touring cricketers would do.

Now we’ve got to be honest, we don’t actually know too many details about the trip beyond what we’ve seen in this YouTube video during which he speaks a language we do not understand at a speed we probably wouldn’t be able to follow even if we did.

But this is what we have pieced together…

Part 1: R Ashwin in the car

In the first part of the video, R Ashwin is behind the steering wheel of a stationary car. After he’s been talking a while, a woman and two children – presumably his family – turn up and get in.

This section of the video is titled ‘en route to Devon’.

Part 2: R Ashwin in a field or somewhere

In the next part of the video, R Ashwin is in a field or somewhere.

This is still in the ‘en route to Devon’ section.

Conclusion: Dunno. Maybe the kids needed the toilet during the drive to Devon and he pulled over for a bit?

This is also in the ‘en route to Devon’ section. Maybe it’s Devon and he just hasn’t been that fastidious in his YouTube video section labelling.

After this, he’s back in the field again.

Conclusion: No idea what’s going on.

Part 4: R Ashwin and his family look at a map of the East Devon coastline

Oh, okay. Now it’s starting to make sense. The Ashwins are on the East Devon coast.

Conclusion: The Ashwins are visiting the Jurassic Coast, which is not quite as exciting as it initially sounds, but still actually pretty cool if you take the time to read some things and think about it quite a lot.

This is absolutely our favourite bit of the whole video. Immediately after we thought that thing about how you needed to read a bit about the Jurassic Coast to properly appreciate it, R Ashwin pans around the information board.

It’s kind of like you’ve inhabited his body and now you’re seeing the world through his eyes.

Conclusion: R Ashwin made an effort to read about and appreciate East Devon’s Jurassic Coast (the Triassic bit, actually).

Next thing you know, R Ashwin’s back in the field.

Except here’s the thing. We’re now in a section of the video titled “Cotswold”.

But this is definitely the same field. The timeline of this video is very hard to understand when you only understand maybe one word in 40 of what’s being said.

Conclusion: R Ashwin has maybe invented some sort of space-time travelling device. Or maybe he just used his space-only travelling device (hire car) to travel to the Cotswolds at some point and then edited the video later.

Okay, you’re thinking this probably isn’t a separate bit of video, except – we shit you not – this segment’s titled “darts”.

Conclusion: R Ashwin went down to his local boozer while staying in either East Devon or the Cotswolds and had his first game of arrows? None of this makes sense!

Oh, okay. Well that clears up the video segment title at least.

Conclusion: R Ashwin did indeed play darts. Looks like he was in a cricket ground at the time.

The rest of the video

The darts segment is seven minutes long. It’s the longest one. It’s the whole of the rest of the video, in fact.

Conclusion: R Ashwin is just generally interested in the world. He went to Devon and maybe the Cotswolds and at some point played darts.

If you enjoy the weird and unnecessary features we do here at King Cricket and you’d like us to do more of them, please flip us a coin or buy us a pint each month via Patreon. The more we get, the more of this sort of vital reportage we can do. Cheers.