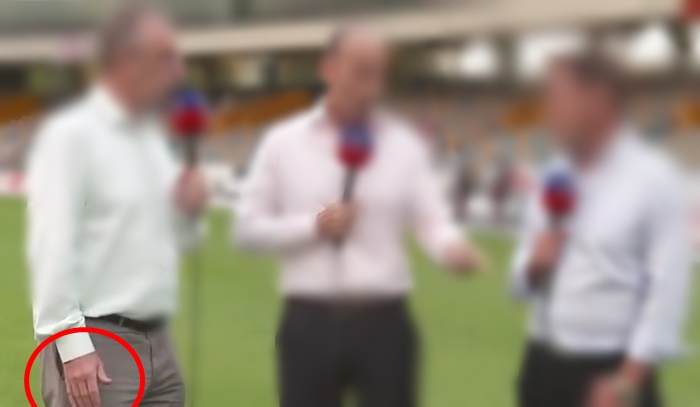 Over time, we’ve become more and more fascinated with one of David Lloyd’s hands. It is the one that hangs by his side when Ian Ward interviews himself and Nasser Hussain at the end of each day’s play on Sky Sports. It is not the one that holds the microphone. It is the redundant one. The unoccupied one.

When Nasser Hussain is answering a question, David Lloyd’s unoccupied hand generally does one of two things: it either does an awkward impression of a passive hand or it gets all restless.

Here is David Lloyd’s hand doing a very bad impression of a normal, relaxed hand hanging by his side.

Here’s another attempt. It does this one a lot.

To be clear, that’s not a hand that’s in motion. That is a static hand. Weirdly static, actually. Borderline creepily static. It is absolutely frozen in that awkward, bent-knuckled, flared-thumbed position and it stays like that for way longer than you’d think possible.

Just when you think it might never move again, it does the restless thing. This typically takes the form of a thumb flick.

First of all, consider the context. The end-of-play interview is a fundamentally awkward affair where two of the three people involved will always be doing nothing at all. They’ll just be standing there while the other person talks.

This is uncomfortable enough, but then consider those moments when Nasser Hussain holds forth on some aspect of English cricket.

Like his colleague Mike Atherton, Nasser Hussain’s role in the Sky commentary team is to be clear and fair and insightful.

Bob Willis’s job was to have strong opinions and express them in a very black and white way and to be hugely entertaining in the process. There were few things more satisfying in life than agreeing with Bob Willis on a matter that irked him. As he tore his target a new one, you felt (a) that the tearing of new ones was justified and (b) that the new one had been very effectively torn by someone extremely adept at the tearing of new ones.

When these two speak, their words carry weight. You feel you have to listen. Like many people, we make a great many bad and weak decisions in our life and we sometimes wish we could subcontract all of our decision-making to Athers and Hussain. In this fantasy, they would follow us round like two wise angels and our life would improve immeasurably. (To be clear, our life is fine and lovely and even sometimes wonderful, but we still feel it would be unimaginably greater and that we would be infinitely more successful in every sphere if we constantly had access to the thinking power of Atherton and Hussain.)

We suppose what we’re saying is that we trust Atherton and Hussain completely.

Of the two, Hussain is the more passionate, which means that his end-of-play interviews can feel more essential, even if the nuts and bolts of what is being said is actually the same.

When Nasser latches on to a particular subject that really animates him – say, England’s selection policy or the fact that county cricket isn’t preparing batsmen for Test cricket – all his colleagues can do is just step back and let him go.

Nasser will talk for minutes and at the end of it you will feel smarter, better-informed and somewhat inferior.

Now imagine being David Lloyd in this situation. We’d like to emphasise that we like Bumble very much. We believe that in the right environment – which is to say one where he is not being actively indulged by TV producers – he is a genuinely funny man. His off-the-cuff comments betray sharp comic timing; he can find humorous angles on on-field events; and he can most definitely deliver an anecdote. But during a Nasser Hussain diatribe, he’s basically a bystander. And worse than that, he’s a bystander who’s being asked to stand still on live TV.

David Lloyd is a knowledgeable cricket man and he holds his own during the end-of-play interview, but he is not – and we really can’t emphasise this enough – he is not Nasser Hussain.

And to make that point again: they’re filming you while this happens.

As you stand there thinking, ‘What am I doing here? What is my purpose within this segment?’ you’re also standing in front of a sizeable TV audience. No matter how experienced a broadcaster you are, it must be a nerve-wracking mentally-destructive experience.

Now consider David Lloyd’s hands. This is speaking television and the person you’re attached to isn’t even speaking. You could barely be more redundant. The left hand at least has a microphone to hold, but the right hand is just a useless, pointless thing that has nothing to offer whatsoever.

Imagine being that hand. Imagine being that hand in that situation: having no skills, no strengths, no role. You always thought you’d become smart and worthy and valuable, but at times like this it feels like all you are is the most useless part of a person who some people find moderately amusing.

This is an updated version of an article first published in February 2019.