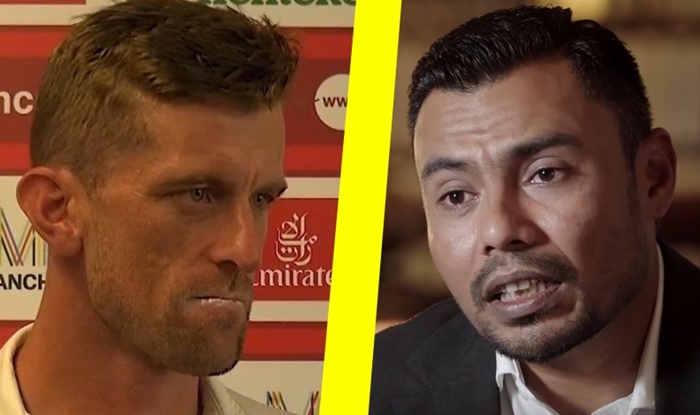 Danish Kaneria is a Pakistani cricketer who has been banned from the sport for life for spot-fixing. Dane Vilas is a South African cricketer who currently plays for Lancashire. Despite what their names suggest, neither player is from Denmark.

So who is most Danish?

Let’s measure the two men against what we know about the country of Denmark to try and work it out. As an added challenge, we’ll also have to make sure that Vilas wins because Kaneria’s an arsehole.

For the record, the most Danish Test cricketer is Amjad Khan, who played for England but is from Denmark. Australian one-cap wonder Bryce McGain played matches for Denmark, but is not Danish.

How do you sum up the Danes?

Famous Danes include author Hans Christian Andersen, film director Lars von Trier and Metallica drummer Lars Ulrich – the last of whom we’re mentioning purely so we can write a paragraph about Some Kind of Monster, which is perhaps the most inadvertently hilarious rock documentary ever made (a hotly-contested title).

The best scene in Some Kind of Monster comes not long after singer James Hetfield has finally emerged from six months in rehab and told everyone he can only work four hours a day. Hetfield stipulates that the rest of the band cannot work on, listen to, or discuss their music during the 20 hours when he’s not around. The rule frustrates Lars who expresses his feelings by yelling the F-word (fuck) in Hetfield’s face.

Screaming the F-word (fuck) in someone’s face doesn’t seem like a quintessentially Danish thing to do. The kinds of things that sum up the Danes are coffee, food, cycling, surnames, happiness, nudity, lack of corruption and the fact they settled in Northern and Eastern England from the 9th Century onwards.(You can’t argue with these categories because we checked some of them with a mate who used to live in Copenhagen.)

Let’s look at each of those things and see how Danish Kaneria and Dane Vilas measure up against them.

The Danes are huge coffee drinkers, getting through an average of four cups of the stuff a day.

Here’s Danish Kaneria in an episode of Cafe Cricket with what certainly looks like a really milky piss-weak coffee.

You’re probably wondering whether he drank any of it. We watched the video and he did.

We’d also argue that you could probably get through four of those coffees and still sleep at night, so in the absence of any strong evidence from Vilas, we’re giving this one to Kaneria.

The Danes are known for butter, bacon and pastries. Apparently they also love liquorice in all its forms, but we don’t really know what to say about that.

The key one here, really, is bacon. Kaneria is from Pakistan and while he’s a Hindu, not a Muslim, that only makes it about 0.01% more likely that he’d eat pork.

Vilas is from South Africa and you can therefore be pretty confident that he eats all of the meats.

Denmark has more than twice as many bicycles as cars. Over a third of people in Copenhagen commute to work, school or university by bike. Here’s a 24-second time lapse video.

We couldn’t find any references to cycling in connection with Dane Vilas or Danish Kaneria, but we did see one photo where Kaneria was leaning against a car, so we’re giving this one to Vilas.

Their respective first names are actually way more Danish than their surnames. You could probably write a whole article about this if you could find a publication willing to publish something so insanely niche and inconsequential.

Denmark was ranked the world’s second-happiest country after Finland in the annual World Happiness Report.

Who’s happiest out of Kaneria and Vilas? The latter plays cricket for a living while the former isn’t allowed to play cricket at all. What could make a person happier than playing cricket?

The Danes have a very relaxed approach to nudity. Bit too relaxed, if you ask us. Clothes hide a multitude of sins.

After some very brief and very tense googling, we have concluded that neither Kaneria nor Vilas has ever been naked in public. HOWEVER…

According to the Corruption Perceptions Index, Denmark is the least corrupt country in the world.

Settled in Northern and Eastern England

The whole Danelaw region is a bit woolly and both Essex, where Kaneria played, and Lancashire, where Vilas plays, were on the fringes of it.

We could go all historical cartography on this one, or we could acknowledge the simple fact that Vilas is still in the area whereas Kaneria isn’t.

Danish Kaneria should be forced to use the words ‘Not Very’ before his name.

As you’d imagine, this isn’t really the kind of thing that other cricket publications are willing to publish. If you’d like to see more of this sort of thing, please consider pledging a quid (or more) each month to support King Cricket via Patreon. Put simply, the more we get, the more “features” we’re able to do.