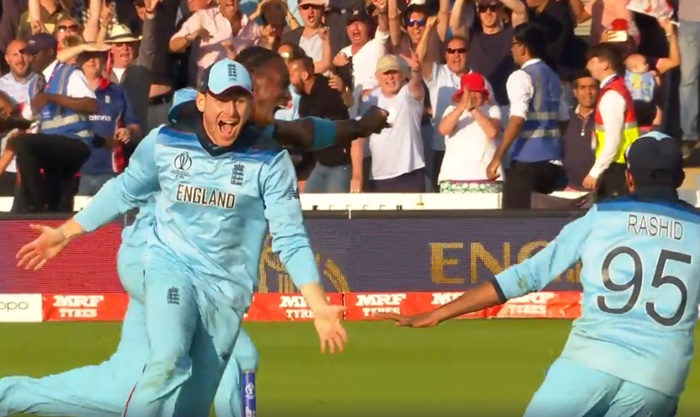 Cricket is at its very purest and best when it’s completely village; when the bowlers are batting and people are being run-out and everyone has to keep checking the laws and playing regulations because they don’t have the faintest idea what’s going.

Here are five bonkers moments from the climax of the World Cup final. Let’s try and work out which was the cricketiest one.

Recap: With 22 runs needed to win off the last nine balls, Ben Stokes hit the ball high and hard. Not so hard that the ball flew into the stands though. It dropped within reach of Trent Boult on the boundary who caught it.

Why it was very cricket: A clean, fair catch and the game was basically New Zealand’s, but six runs would mean England still had a chance. Trent Boult trod on the foam toblerone that represents the boundary. He did it while holding the ball, so it was a six. It was not entirely clear that the ball itself at any point actually crossed the boundary, but that doesn’t matter.

The deflected overthrow for four/six

Recap: England needed nine runs to win the World Cup off three balls. Ben Stokes hit the ball, ran two, and dived for his ground. As he was doing this, he hit a second shot and it went for four. Here’s why it was the greatest shot anyone has ever hit.

Why it was very cricket: Overthrows – scoring surprise extra runs when the fielding side can’t get the ball where it needs to be at the first time of asking – is tremendously cricket. This particular instance was unusually fine because the ball deflected off Stokes. Standard practice is not to run in these situations because it feels a bit mean. And England didn’t run. They stood there and watched the ball go over the ropes for four (additional) runs. You don’t have to claim overthrows; they’re added automatically, so that delivery went down as a six and there was nothing anyone could do about it. As a final flourish, people are still arguing about whether it should have been a five because of the ambiguity of the wording of the game’s laws. Does ‘the act’ of an overthrow take place when the ball is thrown or when it fails to be safely gathered? There was a one run difference depending on how you answer that question.

How uniquely cricket was this moment? It was quite insanely cricket really.

Recap: England needed three to win off two balls. Ben Stokes pocked a yorker into the outfield while falling over and he and Adil Rashid tried to run a near-impossible two. Rashid didn’t even get close to making it and was run-out.

Why it was very cricket: Firstly, Rashid was out without even facing a ball. Secondly, it didn’t matter. Thirdly, it did matter. Being out without even doing the thing you’re there to do is very cricket. It didn’t matter because the losing of a wicket was of much less importance than engineering a situation where Ben Stokes would face the next ball. It did matter because running Rashid out negated the second run. The run was more important than the wicket.

Recap: England needed two to win off the final ball. Ben Stokes planted his bat in the way of a full toss and then he just started running. He and Mark Wood completed the first run in zero seconds, but this still didn’t give them enough to time to complete the second and Wood was run out.

Why it was very cricket: As with Rashid, Wood was out without facing a ball. Running him out also prevented what would have been the match-winning run. Again, the run was more important than the wicket – a complete inversion of normal priorities that only really applies for a few deliveries a match. The dismissal meant the game was tied – both teams had the same number of runs. It used to be that the team that lost fewest wickets (New Zealand) would be declared the winner in these situations, but they don’t do that any more because a Super Over is of course so much more satisfactory…

How uniquely cricket was the moment? About as cricket as the Rashid one, but with the added nuance that this decided the match. Or rather didn’t.

Recap: New Zealand needed two to win off the final ball of the Super Over. Martin Guptill and Jimmy Neesham ran an easy one but England got the ball to Jos Buttler in time to prevent the second.

Why it was very cricket: All of the reasons that applied to the Rashid and Wood run-outs, but with the added bonus that even though the Super Over scores were level, England won because they’d hit more fours during their main innings. Nobody knew (or cared) about this random ‘it’ll never be needed anyway’ rule until after England’s Super Over when it became apparent what New Zealand’s target was.

How uniquely cricket was the moment? This was the most uniquely cricket moment of all and we’ll tell you why. The four events before this were all purely match-level cricket, but this moment – the winning of the World Cup by England – was cricket on a broader level too. For an event to be truly 100 per cent cricket, you also need a dose of strategic confusion. The moment when Jos Buttler broke the bails and ran out Martin Guptill to win the World Cup for the very first time also marked the moment when English cricketers basically stopped playing 50-over cricket.

How insane is that?

Domestic 50-over cricket had finished for the season in May.

Also – and this was the really astonishing part considering enthusiasm for 50-over cricket was presumably at a peak – this was the moment when counties kind of stopped playing the format altogether.

Almost as if it were a videogame that they’d completed and didn’t ever want to pick up again, England pretty much binned one-day cricket at the exact moment they’d got the hang of it.

In 2021, the county cricket 50-over competition is essentially a second XI competition. The Hundred – a 100-ball competition – takes place at the same time and anyone who’s any good at cricket is playing that instead.

One of the main selling points of The Hundred is that it’s supposed to be simpler to follow, but (a) good luck with that (see above), and (b) why do you even want the game to be simpler anyway?

Witness the end of the 2019 World Cup final, people! Look upon the chaos and know that it was beautiful and good!

If you like the features we do here on King Cricket and you’d like us to do more of them, you can always flip us a coin or buy us a pint each month via Patreon. The more we get, the more easily we can sack off other stuff and do this kind of thing instead. Cheers.

You can also sign up to get our articles emailed to you. (This is free. You don’t have to back us on Patreon or anything.)