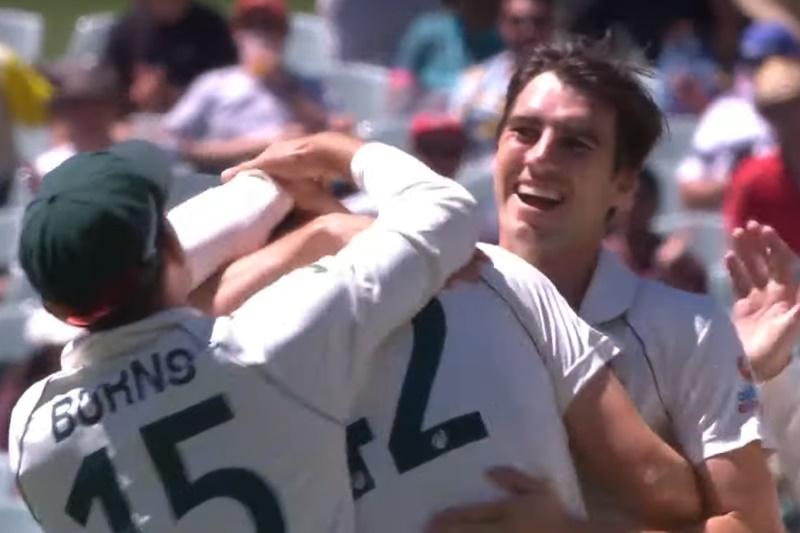 Whenever a Test captaincy vacancy opens up, the discussion begins. Who are the options? Top players are required for so much international cricket these days that usually there’s no obvious standout candidate with extensive first-class captaincy experience.

So the TV pundits go through the team’s inked-in senior pros and weigh up all of their credentials. And whenever they come to a fast bowler, they pretty much just say that they don’t have a case because they’re a fast bowler.

James Anderson knows the rules as well as anyone.

“I think more bowlers should be captain,” he told the Sydney Morning Herald. “There’s lots of arguments why it would suit to have a bowler as captain, but it’s just not the done thing is it? Captains like to look good at first slip and look like they’re making all the field-position changes and doing all the good stuff. But I’m all for it.”

Do you know the best way to become captain if you’re a fast bowler? Trick people into thinking that you’re a batter. A decent proportion of Test bowling captains have been all-rounders.

Imran Khan is an obvious example. Imran really ramped up the batting while he was in charge, hitting five of his six Test hundreds and averaging 52.34. He also averaged 20.26 with the ball during this time, so it’s hard to argue he was weighed down by the responsibility. (Imagine if Pakistan had stuck to the ‘your captain has to be a batter’ script and never put him in charge. That is a super-weird parallel universe to try and wrap your head around.)

India had Kapil Dev as captain; South Africa had Shaun Pollock; West Indies had Daren Sammy and now have Jason Holder. England have given Ian Botham, Tony Greig and Andrew Flintoff a go.

When Ben Stokes led England in a Test in 2020, we tried to work out which England all-rounder has the worst record as captain. We concluded it was Flintoff on the basis that he basically ruined his own playing career by bowling himself for 68 overs in one Test.

We’d argue that this is one of the legitimate challenges of being a bowling captain: those times when it’s all on the line and you need a breakthrough and you want to lead from the front… and then you don’t immediately get that breakthrough and the desperately-needing-a-breakthrough situation remains unchanged. A good 25 off Flintoff’s 51 second innings overs in that match were ‘just one more over’.

There have been a few non-all-rounder Test captains too.

Bob Willis captained England. Courtney Walsh led the West Indies once they were convinced of his absolute indestructibility. Pakistan got confused by the Imran thing and gave both Wasim Akram and Waqar Younis the job in the mistaken belief that you’re supposed to have your best fast bowler as captain (although Wasim did hit three hundreds, including a double, so maybe that helped (reverse) swing it for him.)

Going into the 2021/22 Ashes, Australia decided that Pat Cummins would be their captain.

We have always been very bad at identifying captains. We remember thinking that Michael Vaughan’s relaxed approach would undo all of the progress England had made under Nasser Hussain’s ferocious micro-management – but turned out he was a great choice for that side.

Then we were pretty sure that Kevin Pietersen would be a better option than Andrew Strauss after that. Wrong again.

It’s worth explaining why we thought that though.

One of the best and worst cricket nicknames of all time was when Kevin Pietersen was called Dumb Slog Millionaire after getting a big IPL contract. It was brilliant because it was timely, a great play on words and it played into all the sneering and snobbishness about the shortest format and the IPL in particular. It was also terrible because it totally mischaracterised KP’s batting.

Pietersen was not a dumb batter. He was a smart, calculating batter – a proactive batter. Rather than simply ‘playing each ball on its merits,’ he approached each phase of play as a problem for which he would have to come up with a solution. His batting wasn’t necessarily about minimising risk for each and every delivery; it was about manipulating the broader situation in the hope of minimising risk for himself in the longer-term. Fielders were threats. Gaps in the field were to be exploited – often innovatively. The ‘slogs’ stick in the mind because they often seemed so rash given the immediate circumstances.

All of this amounts to tactics. This is what people tend to mean when they say someone has, “a great cricket brain.” They mean that person can evaluate batting danger and either combat or exploit that, depending on whether they’re batting themselves or in the field. Pietersen has a good cricket brain. What we saw with his England captaincy were failures in strategy and man management.

These, we’d argue, are far more important aspects of captaincy and they’re elements that can quite comfortably be undertaken by a fast bowler.

Upon taking the Australia job, Cummins said that he and his vice captain Steve Smith were going to take a collaborative approach and that on-field tactics would be one area where he’d be looking to cede control a lot of the time.

“There’s going to be times where I’m out in the middle, it’s a hot day, I’m in the middle of a spell and I need to turn to people for advice, for tactics, for experience and that’s the main reason – one of the big reasons – why I wanted Steve to be vice-captain,” he said.

“How that looks? I think it potentially could look differently to [how] you’ve seen partnerships work in the past. I think that will remain pretty fluid.

“A 22-degree day might look differently to a 40-degree day. There will be times on the field where I’ll throw to Steve and you’ll see Steve move fielders around – maybe doing bowling changes, taking a bit more of an elevated vice-captaincy role – and that’s what I really want.”

A lot of people think that setting the field is the main element of captaincy, but a lot of bowlers set their own fields anyway. Why shouldn’t a captain delegate to an even greater extent and intervene only when he thinks it necessary?

Virat Kohli is a so-so tactician, but he has developed India’s Test team significantly since taking over from MS Dhoni.

Dhoni was a good captain too, but his approach was clearly geared towards the formats where you can win without taking wickets. In contrast, Kohli wants his Test teams to go after the opposition. If he is blessed with the bowling tools to do this, he has also consistently fielded stronger bowling attacks at the expense of the team’s batting in pursuit of his goal. This demonstrates a commitment to that way of playing in a way that merely saying ‘we want to be aggressive’ does not.

The constituent parts of Kohli’s Test sides may change – often quite considerably – but his philosophy doesn’t and he has managed to imbue this into his teams. His is a culture of fitness, self-improvement, refusal to take a backwards step and inexplicable bubbling anger at all times.

He has pushed for a will to win to supersede a fear of failure and he has done so successfully enough that the team now operates perfectly well even in his absence.

And he is absent quite a lot.

Because this is the current cricket world, isn’t it? People say that a fast bowler can’t be captain because it’s so much more likely they’ll get injured and miss games – but who doesn’t miss games in this day and age? Between injuries, paternity leave and sitting out entire tours in a bid to postpone burnout, the average all-format batter will miss plenty of matches. Someone who plays for their country in all three formats is not a ‘safe’ pick if you want your captain on the field all the time.

If you’re captain of England, India or Australia, in particular, being captain is simply too big a job for you to do on your own. If you’re not playing, you’re planning or travelling. And if you’re not planning or travelling, you’re being briefed for media appearances in which you’ll be asked a bunch of tricky questions about some political hot potato or other that’s not really anything to do with hitting a ball with a cricket bat. Or maybe it’s a photo shoot today. Or maybe – who knows – maybe you’ve got a chance to go into the nets and practise.

Something has to give. Plenty of things have to give, in fact. The only question is what those things should be. Maybe bowling changes and field settings are some of the easiest things to hand over to someone else. Maybe actually playing in the matches has become an optional aspect of Test captaincy.

King Cricket is a crowdfunded website. It would be very lovely and very helpful if you joined the crowd funding it.