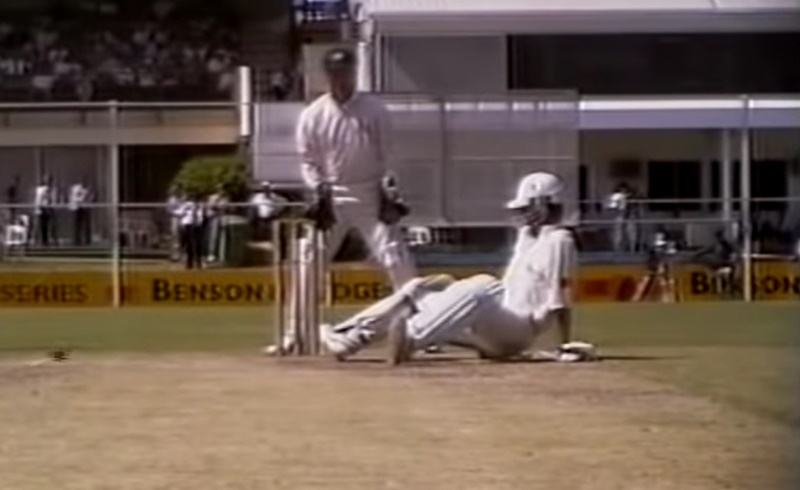 Not every cricketer is great, or good, or useful. This begs a question. Who routinely contributed the least to their team? Which Test cricketer was the biggest burden?

Back in November, we took a look at the worst Test bowling averages of all time. As you might imagine, quite a lot of the contenders were part-timers.

You can bowl very badly and still be well worth a place in a Test team purely on the strength of your batting. You can also be a poor bowler and offset your inadequacies to some degree with some fairly middling batting.

So let’s weed out those guys and pose a bigger question. Who has contributed the least? Which Test player has been the heaviest dead weight carried around by his side?

What we’re interested in here are the players who are barely even one-dimensional: the number 11s who offered very little with the ball and the very worst specialist batsmen.

Here are our contenders….

(Thanks to Tim who suggested we look at the gap between players’ bowling and batting averages, which was the starting point for this.)

If we impose a qualification of having taken at least 20 Test wickets, the player with the greatest differential between his batting and bowling averages is of course good old Rubel Hossain, who figured prominently in that worst Test bowling averages piece.

Second on this list is England’s Ian Salisbury, who averaged more than Hossain with the ball (76.95) but saved himself from complete ignominy by averaging 16.72 with the bat.

Salisbury even made a fifty. Responding to Pakistan’s 505-9 at Old Trafford in 1992, he arrived at the crease at 256-7. England saved the follow-on and the match was drawn, so actually that was pretty useful and therefore not at all what this article is about.

In contrast, Rubel’s one significant Test performance was a five wicket haul against New Zealand in 2010, the usefulness of which is very much up for debate.

Work = Force × Distance so although Hossain was clearly a very heavy burden to lug around, we need to credit players who were carried for longer.

Our next contender is therefore Mohammad Sami, who averaged 41.14 more with the ball than with the bat.

Part of the art of deadweightery is to find a way of continuing to hinder your side for as long as possible. Sami bowled badly, but in taking wickets semi-regularly, he somehow did enough to earn a moderately long Test career.

While Hossain only conceded 2,764 runs in his Test career, Sami hung around long enough to concede 4,483.

And 85 wickets is a lot. It is enough to bowl a team out eight times. Then think about what a team would have achieved if it had taken those wickets at 52.74? Four heavy defeats, that’s what.

This one feels wrong because back in the Nineties Tuffers was the good spinner; the one who actually spun the ball. Okay, Robert Croft could bat – but Peter Such couldn’t. Why is he not on the list?

Peter Such is not in the list because he played far fewer Tests than Tufnell and (surely only because of this) had a better bowling average.

Tufnell’s batting-bowling average deficit of 32.58 is the worst of players who have taken more than 100 Test wickets. We also have to consider his fielding.

Robelinda saw fit to title this clip “The most retarded fielding of all time”.

Tuffers took 12 catches in his 42 Tests, but it’s worth highlighting that Sami’s record – seven catches in 36 Tests – is even worse. (Bucket Hands Hossain took 11 in his 26 Tests.)

However, it’s worth pointing out that Tuffers was often asked to bowl defensively, as proven by a Test economy rate of 2.42 runs an over that is actually better than Glenn McGrath’s.

With the ball, he did some kind of a job. Tuffers is not a contender.

Hats off to Chris Martin who earns a mention despite having an entirely respectable Test bowling record. Averaging 31.44 more with the ball than with the bat is no mean feat when you bowled as well as Martin did.

So what of the batsmen? One thing you can say about everyone above is that they at least played a part in the matches in which they featured – even if that part really only involved the conceding of lots of runs. Because of the nature of the job, batsmen can ascend to a higher plane of irrelevance by shunning centre stage for 99 per cent of a five-day match.

Saleem Elahi is a sly dog. Saleem nearly weaselled his way out of this section by executing a mystery stumping against Sri Lanka in 1997, but – and we cannot emphasise this enough – Saleem Elahi is not a wicketkeeper. Wicketkeepers are useful even if they don’t score runs. (New Zealand’s Murray Chapple (14 Tests, 497 runs at 19.11) will be pleased we picked up on Elahi’s subterfuge because otherwise this section would have been about him.)

Elahi was picked for Pakistan’s one-day side despite never having played a first-class match. In true Pakistani style, he duly scored an unbeaten hundred on debut.

Then, in equally Pakistani style, he manifestly failed to build on this. His Test career in particular was magnificent. His solitary fifty came against England at Faisalabad in 2000. He was dismissed by Ashley Giles in both innings and the match ended a draw.

He did execute that stumping though. We can’t take that away from him.

As we’ve said, we’re giving value to the size of a player’s body of work here and to play 25 Tests as a specialist batsman with a batting average of 19.82 is an incredible thing.

Set against that, playing Pakistan in Lahore in 1955, McGregor top scored with a hundred. New Zealand lost, but he wasn’t being carried that day. He scored three fifties against South Africa too.

In truth, run-scoring wasn’t a particularly big thing for New Zealand back in those days, so McGregor isn’t really a contender.

Kind of like a super-sized McGregor, Omar bumbled his way through a remarkable volume of Test cricket, considering what he brought to the side.

He did however carry his bat in Bangladesh’s first overseas Test, against Zimbabwe in Bulawayo in 2001, which, let’s be honest, is quite a significant feat given the context. It was also his debut.

A Test strike-rate of 38.14 also hints that he kind of did a job at the top of the order.

Before we pick someone, there is a far bigger question we need to address first. The question is this: Did Saleem Elahi and Mohammad Sami ever play in the same side?

The answer, we’re delighted to inform you, is yes.

Saleem Elahi and Mohammad Sami played five Tests together, which means that in those matches Pakistan were basically fielding a nine-man team.

Sami – somewhat disappointingly – took 19 wickets at 28.73, which is actually pretty good. This means that there were multiple occasions when Mohammad “85 wickets at 52.74” Sami wasn’t the worst player in the Pakistan side. Heavily underlining this, he also averaged more than Elahi with the bat – 19.00 (despite a top score of 17).

In terms of how Pakistan’s self-inflicted handicap matches went, they beat New Zealand and also Zimbabwe (twice) but lost to South Africa (twice). The margins of defeat in the South Africa matches were 10 wickets and an innings and 142 runs.

It is pretty obvious that Saleem Elahi was a greater burden – but not as great a burden as Rubel Hossain whose career-best performance saw him concede six an over for 30 overs as the opposition racked up 553-7 declared.

Rubel Hossain was the heaviest dead weight carried round by a Test team.

We can only write features like this because of all the people who are kindly funding King Cricket on Patreon. If you like what we’re doing and you’d like to see us to do more of it, please feel free to chip in a very small amount. You can flip us a shiny coin or buy us a pint each month here.