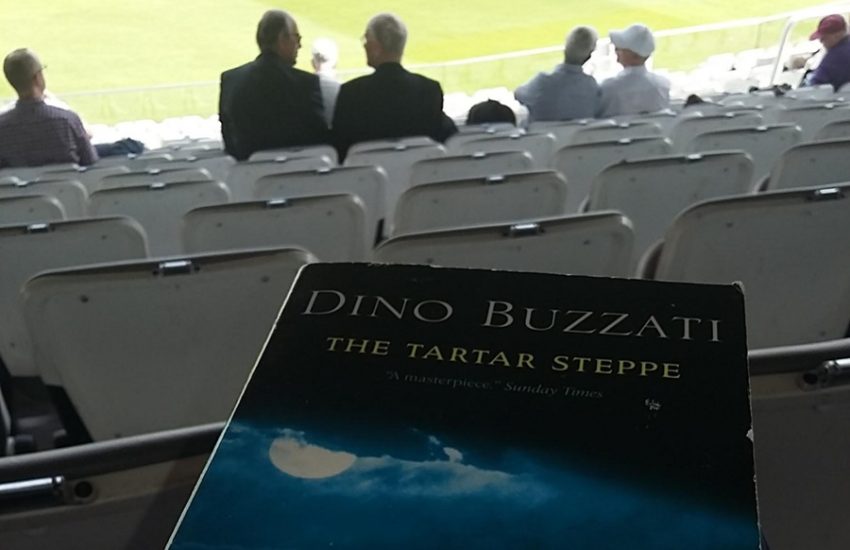 This was the day Alastair Cook scored his final Test century. I was at Lord’s to watch Middlesex play Kent and also to meet up with regular King Cricket contributor Ged Ladd after he had flung himself around playing Real Tennis.

I was sitting in the member’s stand dipping in and out of The Tartar Steppe (1938)  by Dino Buzzati. Buzzati records where he wrote the book. “I was working at Corrierre della Sera in those days. It often occurred to me that that routine would never end and so would eat up my whole life quite pointlessly.”

Perhaps this sentiment could be applied to cricket. The novel relays the trials of Giovanni Drogo, a young soldier posted to a remote mountain fort where he must watch for the Tartars to invade.

He waits. Nothing happens. Time passes. Months go by. Drogo tries to leave, but seems compelled to stay in this dreamlike world of repetition.

He waits the unexpected. He knows his important work is not futile. Is he the third man, an outcast at cow corner waiting for the ball to approach?

He knows the importance of waiting. He is not thinking about his dinner. He is clutching at purpose, awaiting the moment of glory and God forbid he misses the catch.

The story, like the slow game developing in front of my eyes at Lord’s, will have twists and turns and he can’t tear himself away, waiting for the battle to be fought, embracing his importance in this task, beyond the limits of reason. His fort, like cricket, is a glorious distraction.