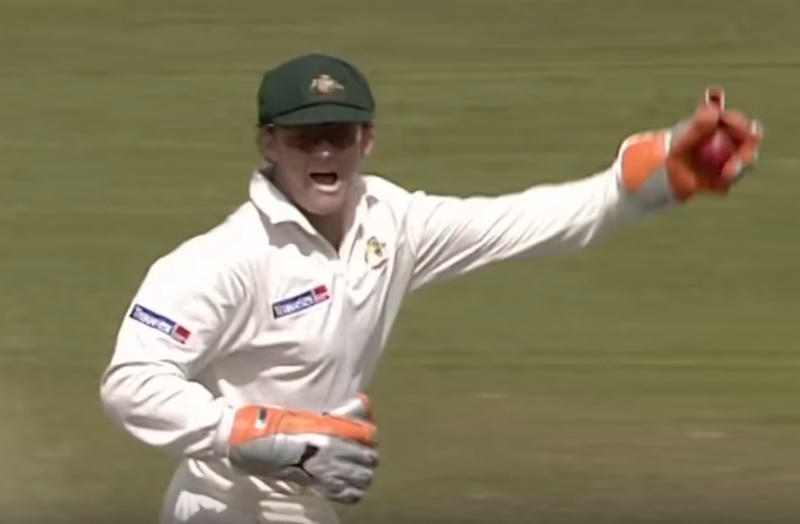 We don’t write about wicketkeepers very much and that’s wrong. Batsmen and bowlers aren’t the only ones deserving of our attention. Squatters have rights too. This article is about the select band of stumpers who have averaged more than two dismissals an innings in Tests.

Wicketkeepers who’ve taken two dismissals an innings and over. It’s not many, you know. If we limit ourselves to guys who’ve played at least 20 Tests so that we can rule out Steve Rhodes, we’re left with just six men and also Brad Haddin.

(Somewhat surprisingly, Rishabh Pant tops the list if we relax the qualification to 10 Tests. Pant averages 2.346 dismissals per innings. This is maybe just a reflection of the fact that teams are being bowled out more often at the minute.)

So who was the busiest?

Let’s rank them in reverse order. (A small amount of weight has also been given to matches played, but we’re not saying how much because you’ll only find fault with how we’ve chosen to do this. This website is not about transparency; it is about unnecessarily laying into Brad Haddin.)

Courtney Browne is a cricketer who crops up in almost no lists for anything. If David Dunn is the antithesis of brittle-boned Mr Glass, Browne is the man who balances out Vinoo Mankad – who crops up so regularly he’s now even managed to get a mention in an article about wicketkeepers.

Pretty much the first thing Browne did as a Test cricketer was drop Steve Waugh on 42.

During his career, Browne mostly kept wicket to Curtly Ambrose, Courtney Walsh and Ian Bishop. This explains why he took catches so often.

He also took all of two stumpings: one off Jimmy Adams and one off Chris Gayle.

Underlining the fact that it pays to keep wicket to good bowlers, Geraint Jones timed his career to precisely coincide with a bunch of quicks who we don’t even need to name and also Liam Plunkett.

Jones was born in Papua New Guinea, so he and Browne encourage the theory that you need to have been born in a different country than the one you play international cricket for to be involved in more than two dismissals per Test innings.

This is not a very catchily-worded theory, so hopefully it will be swiftly disproven.

As well as 128 catches – including one biggie that should really count for at least 100 on its own – Jones took five stumpings: two off Monty Panesar and three off Ashley Giles.

The Giles ones included two in one innings. They were an elite pair: Tino Best and Pedro Collins.

Collins had made two runs in an hour.

Brad Haddin was born in Australia so there’s an end to the ‘born in a different country’ theory and there’s yet another thing that Brad Haddin has ruined.

We weren’t quite sure whether to have Braddin (Braddin? What the hell? How did we only write that for the first time by accident?) or Quinton de Kock next in our list. Then we remembered that in any situation where you can diminish Haddin’s achievements, you should always do so.

Haddin took 262 catches and we don’t care enough about him to check who they were off. He managed only eight stumpings in all those Tests as well, which is, quite frankly, feeble – just like Brad Haddin himself.

The way that we see it, Quinton de Kock has got three things right.

As well as 191 catches, De Kock has also taken 11 stumpings. These were mostly off Keshav Maharaj, but also off JP Duminy, Stiaan van Zyl and Tabraiz Shamsi.

If you look at all of the wicketkeepers – all of them – then Adam Gilchrist is the best batsman.

That’s what Gilchrist known for. Even if you set aside all of the hundreds and World Cup wins, he is probably one of the finest purveyors of the off-larrup there’s ever been. He could be remembered for that alone.

But Gilchrist was also quite a busy keeper. He kept to Shane Warne, after all. His 37 stumpings piss all over these other guys’ efforts from a very great height.

What sort of height? Using the correct units of measurement for height, Adam Gilchrist’s number of stumpings piss all over everyone else’s numbers of stumpings from a height of one Eiffel Tower and six double-decker buses.

Tim Paine has the greatest number of dismissals per innings of wicketkeepers who meet our 20-Test qualification criterion.

This is somewhat disappointing.

Mitchell Starc, Pat Cummins, Josh Hazlewood and Nathan Lyon comprise a handy attack and most of Paine’s busiest keeping days have come when all four have been in the team.

11 times he’s netted four or five victims in an innings and on six of those occasions, all four of those bowlers have been playing. Considering Australia fairly regularly throw in a James Pattinson or a Peter Siddle, that’s really rather striking.

First things first: what the holy ballbags? Kamran Akmal has snuck into an elite wicketkeeper bracket? Have we gone number-blind or number-dumb or something?

Second things second: you’re waiting for an explanation of how Kamran Akmal is a busier wicketkeeper than all the guys above.

Kamran Akmal is not what you’d call a safe pair of hands. There are times when it actually seems like he is not the owner of hands at all.

When he dropped Ross Taylor twice on the way to a hundred in 2011, we wondered whether he actually had footballs made of ice on the ends of his arms. It seemed to make more sense.

Then there was that time he was only prevented from dropping Mike Hussey a fourth, fifth and sixth time by Australia drawing proceedings to a close by winning the game.

We have to factor this in.

Imagine that Kamran Akmal secures two dismissals in an innings. Now imagine how many chances he must have been presented with for those two dismissals to have ensued.

If Kamran Akmal secured on average two dismissals an innings for his entire 53-Test career, one can only conclude that he must have been by far the busiest wicketkeeper in Test history.

We can only write features like this because of all the people who are kindly funding King Cricket on Patreon. If you like what we’re doing and you’d like to see us to do more of it, please feel free to chip in a very small amount. You can flip us a shiny coin or buy us a pint each month here.