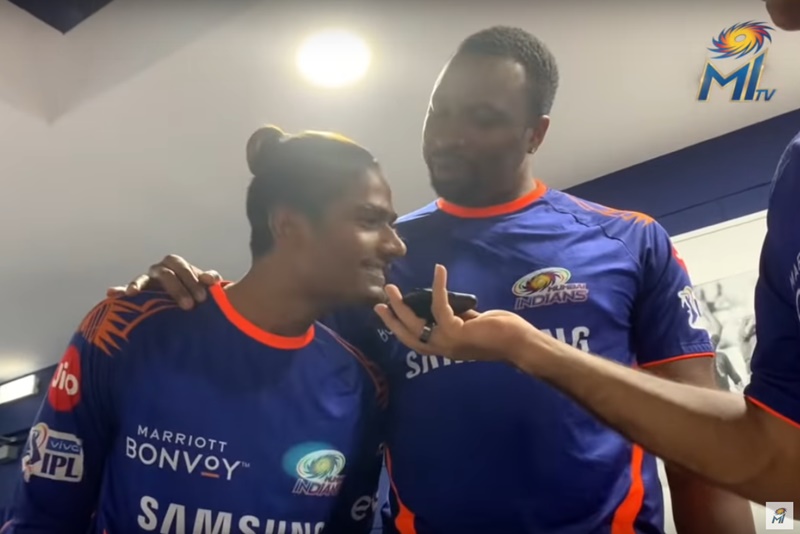 The 2020 IPL is being played in the UAE. As far as we are aware, Mumbai Indians owner Nita Ambani is not in the UAE. This begs a question.

Is Nita Ambani still sucking life from her players through mandatory and dispiriting and unnecessary team bonding shit?

You know the stuff we mean. We wrote about it before. The “okay, gather round everybody, I just want to say a few words” stuff.

It mostly involves everyone standing there uncomfortably while Nita goes on and on and on. Occasionally it involves her forcing someone else to make some sort of speech against their will.

Unperturbed by being on the wrong continent, Nita literally phones it in now.

She phones some random member of staff and then their disembodied hand holds the phone aloft and everyone has to pay attention to it.

This is Kieron Pollard getting congratulated on playing 150 games for Mumbai Indians.

Pollard is well used to this inhuman treatment by now so he manages the terrible situation with relative ease.

That image at the top of the page (which probably doesn’t show if you’re reading the email) is her making Anukul Roy “lead the cheer”.

Anukul Roy “leads the cheer” far more readily and vociferously than any sane person and so now we instantly dislike Anukul Roy and suspect him of being a simpleton.