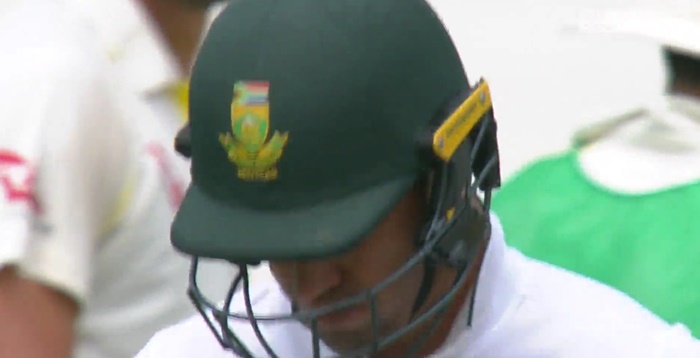 Many things happened during Australia’s win in the first Test of their ill-fated 2018 tour of South Africa. Some of them were cricket, some of them were David Warner falling out with people. The thing that interests us the most – AB de Villiers’ second innings run-out – fell somewhere in between.

Let’s break the moment down, because it was really quite something. We’re struggling to think of a more disrespectful dismissal.

The South Africans were near enough 200 runs behind on first innings and had then found themselves chasing 417 to win.

They quickly fell to 39-3 and so had basically lost. You wouldn’t think there was much left to get het-up about at this point, but then you’re not David Warner.

David Warner is, you suspect, the kind of man who snaps the remote in half in fury when the batteries start to get a bit low.

Nathan Lyon dobbed one down the leg-side and South Africa opener Aiden Markram nurdled the ball towards David Warner.

As Warner scuttled round to get it, AB de Villiers set off down the pitch before doing a big U-turn when he looked up and saw only Markram’s back.

Sadly for de Villiers, he’d gone sufficiently far that the run-out was never in doubt. Warner was grinning even as he threw the ball.

At the bowler’s end, Lyon enveloped the ball with his Mekon hands and duly broke the stumps.

What we didn’t mention was that AB de Villiers was on nought, having only faced one ball. Now here he was lying on his face, run-out in a match his team were about to lose.

Being run-out is always rubbish because to some extent it’s always self-inflicted. It’s worse still when you end up literally lying on your face in the dirt at the moment it happens.

Here’s AB de Villiers literally lying on his face in the dirt having been run out for a duck in a match his team is about to lose.

So Lyon ran past, looking down at him, and to emphasise that de Villiers was both literally and metaphorically fallen, he dropped the ball near him.

You’ll note that we italicised ‘nearly’ in that last sentence. As you can see, Lyon is looking directly at de Villiers even having passed him and is dropping/flinging the ball as he does so. You could maybe, if you so chose, argue that he dropped the ball at de Villiers.

Lyon could not have executed his run-out and ball-drop without the assistance of David Warner. Warner too was hugely keen to emphasise the fact that his team was winning the Test match.

Presumably feeling that the surviving batsman had escaped lightly, he chose to convey his team’s supremacy to Aiden Markram.

Australia wicketkeeper Tim Paine said at stumps that there “wasn’t too much aggression” during Warner’s send-off (which technically wasn’t actually a send-off because Markram wasn’t going anywhere).

Here is Warner’s Hatred Face midway through said send-off. We’re pretty sure we have never been this angry with anyone about anything in our entire life. 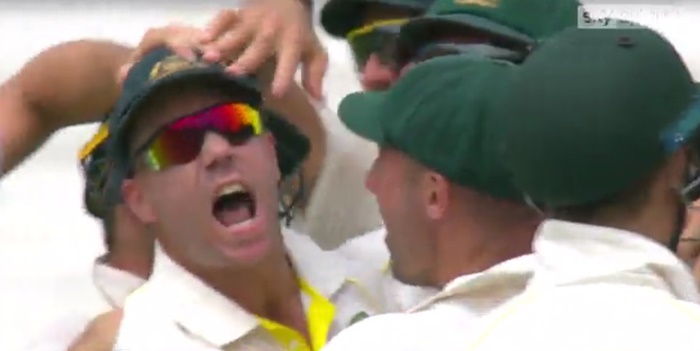 Now we want you to understand something at this point because it doesn’t really come across in stills. Warner is aiming this face AT Aiden Markram. Aiden Markram is the subject of the hatred.

All of Warner’s team-mates came and mobbed him for doing the run-out throw and yet he physically struggled with them to ensure he retained a direct line of sight to Markram.

It doesn’t really need stating explicitly, but obviously as well as making the face, Warner was  saying things at Markram.

And yes, ‘at’ is the right word here. David Warner was most definitely not saying things to Aiden Markram; he was saying them at him.