Indian Skimmer and I went to Twenty20 finals day at Edgbaston. It didn’t go well.

In retrospect, we think we were punished for going against our principles and attending a match at Edgbaston. We have a history with Edgbaston. Edgbaston hates us and we hate Edgbaston.

First there was the rain debacle of 2008. We have previously written a report about this. Reading it back, we think our fondness for sarcasm may have hidden our true feelings: We were Angry.

Secondly there was the horrifically sexist marketing campaign. We didn’t report this at the time, but given how incensed it still makes us feel, this was an error. Here is my complaint to Edgbaston; again it is possible sarcasm masks the true extent of my rage.

You have my address on file because I have purchased tickets from you. To then send me an email suggesting I buy something for my “fella” whilst I pop off to a spa and don’t worry my little head about things like LBW laws, is both patronising and ridiculously illogical. You have my email address on file because I buy cricket tickets, if I wanted to go to a spa instead, I’d be on their mailing list.

Please bear in mind the following things when designing your next marketing campaign:

1) Women have been known to enjoy watching sport.
2) Women can actually use computers to order their own tickets.
3) Women are, generally, not stupid enough to date a man who sends her to a spa so he can get pissed with his mates at the cricket.

But Kent got through to Finals Day. So we bought tickets – £60 tickets. Justin Kemp is just about worth £60, especially when you factor in his fondness for wandering around in shorts.

All we had to do was park the car. However, in order to park the car we had to decipher Edgbaston’s colour-coded parking signs and, stupidly, we’d left our Enigma machine at home. We started by following the purple signs, because we like the colour purple. We had to abandon this strategy nearer to the ground because the purple signs had been blanked out with masking tape.

A man then offered us his driveway for £15. In hindsight, we should have taken up his offer because when we tried Orange car park, we were confronted by a rude man in a tabard who told us we could only park there if we were a player. Men in fluorescent tabards shouldn’t be allowed to use sarcasm. By this point we were mildly frustrated but not Angry. The anger came 20 minutes later when we found our designated car park (Black) and were charged £20 for the privilege of parking in a field. £20. For £20 we’d expect a valet service and a man in a hat. 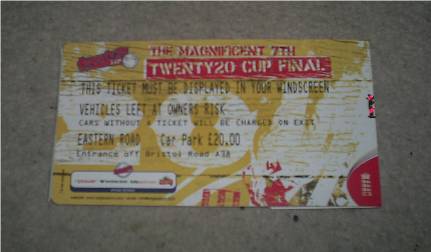 Nonetheless, despite being Angry, we persevered. This was probably a mistake. We couldn’t afford any food at the ground owing to Edgbaston stealing £20 off us in the car park. We combined our spare change and bought a regular coffee. “Regular” apparently means “tiny” in the Edgbaston world of customer service. We sat in our seats and moaned about having to pay £20 to park the car. There was some cricket going on, but we were blinded by rage.

We did see Justin Kemp and his legs, but they were only worth £10 rather than the £140 we’d paid, because we were sat so far away that we got him briefly confused with Amjad Khan. However, that wasn’t Justin Kemp’s fault, it was Edgbaston’s fault.

Justin Kemp didn’t let us down. Justin Kemp would never send us a sexist email or charge us all our money to park the car.