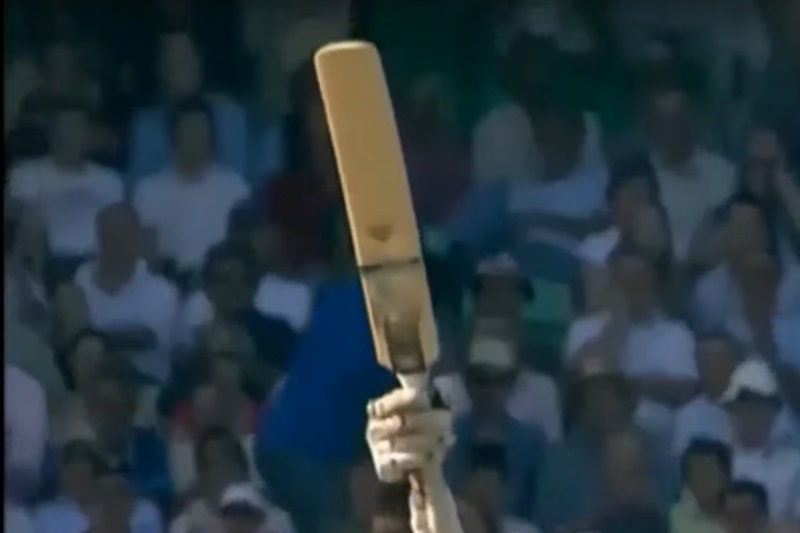 Sometimes a tail-ender throws the bat and gets a few runs. A quick 20 or 30 or even a half century. But a Test hundred? That’s a bigger thing. Who is the worst batter to have achieved that feat?

Many films generate a sense of tension by making the audience feel helpless. The easiest way to achieve this is by putting the protagonists up against a seemingly invincible foe.

The Terminator is a pretty classic example.

“It can’t be bargained with. It can’t be reasoned with. It doesn’t feel pity, or remorse, or fear. And it absolutely will not stop, ever, until you are dead.”

The Terminator feels so terrifying because fighting it seems so futile. Nothing’s going to faze it. The damn thing attacks a police station on its own and kills everyone.

The Terminator was almost impossible to stop, but stop it they did. That same sense of helplessness was then recreated in the sequel by making Robert Patrick’s T-1000 a shape-shifting, self-healing git.

One of the problems with the Terminator series since Terminator 2 is that it’s been hard to improve on that. This means the audience always has a sense of, ‘Well, they managed to stop the T-1000, so this current situation doesn’t really feel that bad.’

In cricket, that same feeling of helplessness can hit you from the exact opposite direction.

Anyone who saw Tino Best’s highest Test score will know what this article is about. In 2012, at Edgbaston, Best came out to bat at number 11 and made 95 runs.

It started with a few comically uppish drives, proceeded with a few outside edges for four and then at some point around the half century mark, Tino Best unexpectedly found that he could bat.

This is a thing that sometimes happens. It’s partly the batter and partly the bowling team, but mostly it’s the interaction between the two.

Sometimes a tail-ender slogs a few and everyone smiles, knowing they’ll be out soon. But sometimes they don’t get out. Sometimes they get their eye in and it just goes on and on.

Amusement becomes irritation becomes genuine concern. And then at a certain point – probably when the player reaches around 70 – the fielding side starts thinking to itself: “Wait a minute. If we were actually going to get this batter out, surely we would have done it by now?”

Deflation and fatalism set in and the next 20-odd runs are all-but-guaranteed because the only thing that will change the dynamic now is a looming hundred and the pressure of a once-in-a-lifetime opportunity to reach three figures in a Test match.

The point here is that while invincible foes can make you feel small, there is no sense of helplessness greater than when your team can’t even get the incompetent batters out.

In recent years, we have taken to imposing a ‘multiple Test hundreds’ clause to our definition of an all-rounder. A bowler can definitely make a hundred, but if that same player then hits a second hundred, you have to seriously consider reclassifying them.

It’s not a cut-and-dried thing, but we’d argue that as blunt instruments go, it gives pretty good results.

To give you some sense of how the rule plays out, it’s what separates Mitchell Johnson (one Test hundred) from players like Sir Richard Hadlee and Shaun Pollock (two Test hundreds).

> Who is Test cricket’s greatest number eight? (Or: Which Test bowler was the best batsman?)

We reckon the only person who really knackers things up in this instance is Harbhajan Singh, who made a hundred against New Zealand in November 2010 and then another one against the same opposition barely a week later. Two Tests tons or not, Harbhajan was not an all-rounder.

That particular detail doesn’t really affect us today though because we’re looking beneath that line. We’re limiting ourselves to players who hit just one Test hundred. (‘Just one’ is a somewhat ridiculous term to use about Test hundreds. How would you feel if you’d hit ‘just one’ Test hundred? That would probably be a thing you’d mention to people all of the time.)

Now obviously there are also a lot of capable batters who have only hit one Test hundred. We’re not looking for Dinesh Karthik, Nick Knight or – somewhat unusually for this website – Rob Key here. We’re looking for bowlers.

So let’s also impose a wicket requirement. Let’s limit ourselves to players who’ve taken at least 50 wickets because that way we know we got a long enough look at these guys to properly gauge their Test batting.

Who is the worst batter to have hit exactly one Test hundred? These are our contenders…

We have a long track record of unkindness to Ajit Agarkar. We used to have him in the ‘rubbish player who still keeps getting picked’ seat. We are however confident that we can open the bidding with him in the knowledge that we’ll swiftly find someone worse at batting.

This is largely because it was Agarkar’s bowling that was crap (58 Test wickets at 47.32). His batting was only crap if you measured it against his occasional misguided billing as an all-rounder.

Agarkar’s 109 not out against England at Lord’s looks pretty compelling on paper in that it is not supplemented by any Test fifties. He did however only play 26 Tests (only?!) and he did hit four first-class hundreds.

Agarkar has set a benchmark. But we can do better.

Is Stuart Broad the worst batter to have hit exactly one Test hundred? This is quite an easy one to answer because Stuart Broad is of course the greatest batsman of all.

Broad’s 169 against Pakistan does warrant a mention though because none of our other contenders have played anywhere near as many matches. To have played in over 150 Tests and made a whole bunch of fifties while only reaching three figures once is in many ways quite the feat.

An obvious suggestion and an extremely strong suggestion. Jason Gillespie managed two fifties in his first 70 Tests and then made 201 not out in his final Test innings after going in at three as a nightwatchman against Bangladesh.

This is arguably the definitive ‘We can’t even get this guy out!’ innings and indeed Matthew Hayden was the only batter dismissed for under 50 in Australia’s 581-4 declared.

It’s worth mentioning, however, that Gillespie did manage two other first-class hundreds. We’ll see how things go, but that’s got to count against him.

While Kumble’s Test batting average of 17.77 exceeds Agarkar’s 16.79, his batting underperformance was far more protracted. He only hit five fifties in 132 Tests, which is an impressively small number. That average is also lower than Gillespie’s 18.73.

Gillespie still shades it for us though, not least because Kumble hit six other first-class hundreds, which is way too many, no matter how many games he played.

As a consolation prize, we do think Kumble played the most admirable shot to reach three figures. (The ball is near the helmet behind the keeper in the image below.)

Kevin Pietersen bowled a floaty, wide piece of shit and Kumble came down the pitch and turned it into a wide yorker.

After under-edging what we’d have to describe as a long-handled straight sweep, he dived for his ground, only to see the ball had evaded Matt Prior and gone for four. Wonderful stuff.

So far, so good, but four fifties in 33 Tests is a bit damning.

Two fifties in 49 Tests is a much better ratio and Saqlain’s Test average of 14.48 is also highly compelling.

It’s tempting to dock the spinner a few marks because he came in after an intimidatingly run-hungry Pakistan middle order that comprised Inzamam-ul-Haq, Mohammad Yousuf and Younus Khan at four, five and six. (Weirdly, only two of them made hundreds – although after seeing Younus register a duck, Yousuf did at least ensure his was a double to make up the shortfall.)

That would be the wrong thing to do though. We’re not really rating the hundreds here – they’re taken as a given – it’s the career batting that contextualises the hundred that’s of interest to us. Saqlain’s record is not dissimilar to Gillespie’s: two Test fifties and a smattering more in first-class cricket. Gillespie’s superior averages probably give the Pakistani the edge though, particularly when you factor in the Australian’s regrettable first-class hundreds.

Saqlain is our new frontrunner.

Yasir Shah has made seven fifties in his 20-year first-class career, but not a single one in his 46 Test appearances. He did however make a ton in a day/night Test in Adelaide.

One of our very favourite things about this innings is that Pakistan looked at Yasir’s complete lack of scores and his Test average of 12.00, then then looked at their other bowlers and said, “Okay, you’re batting at eight.”

Eight! Yasir Shah managed to find a Test batting line-up where there were three batters thought to be worse than him. And then, against all odds, he comprehensively proved that assessment correct.

A year later Taylor added another fifty against England, but that was the only other time he reached any kind of batting landmark in any form of professional cricket. It is a close-run thing, but we would argue that the sheer hollowness of Taylor’s overall career record is a sign that he was a worse batsman than Yasir Shah.

“It was the sort of pitch that, once you got in, it got easier,” said Taylor after making his hundred. Writing at the time, we asked how he was able to assess the pitch in this way given that he had never actually ‘got in’ before.

The secret to Taylor’s success was, perhaps unsurprisingly, a top tip from one of his team-mates – a man who made rather more than one Test hundred.

During Taylor’s innings, Shivnarine Chanderpaul apparently advised him: “Bat and bat and bat.”

Our Patreon backers give us the time to produce these kinds of features that probably couldn’t find a home anywhere else. Crowdfunding keeps this website’s lights on. You can find more details here if you like the site and feel like you can spare a quid a month or more.