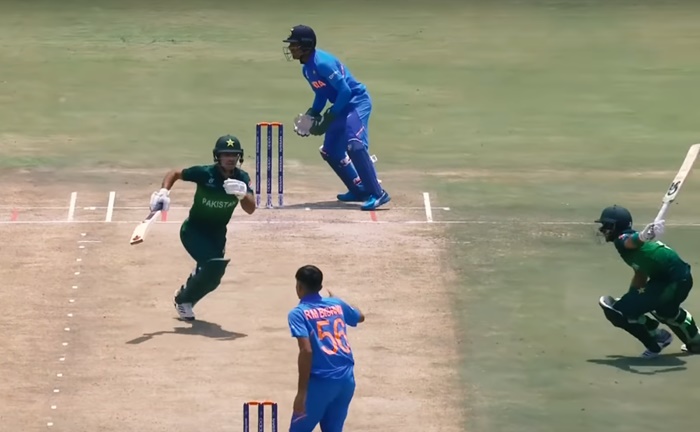 India v Pakistan. The greatest rivalry of all. There are so many aspects to their eternal tussle for supremacy, but this week everybody – every single person in the entire world – is pondering only one specific thing: which nation delivered the better run-out where both batsmen end up at the same end during the Under-19 World Cup?

These are your two options.

Qasim lost his wicket in the semi-final against India when he tipped the ball into the off side, set off for a single that wasn’t there, changed his mind, then changed his mind again. Qasim ended up racing non-striker Rohail Nazir to the bowler’s end as the wicketkeeper broke the stumps behind them both. You can see the footage from 1m05s here.

Jurel lost his wicket in the final against Bangladesh when he tipped the ball into the off side, set off for a single that wasn’t there and then just sort of pressed on anyway, even though non-striker Atharva Ankolekar had only taken a couple of teasingly noncommittal steps down the pitch before turning back. Those in the UK can see the footage on the BBC website, otherwise you might have to make do with lower quality versions on YouTube.

Let’s be 100 per cent clear here. When we rate run-outs, we rate them according to how funny they are. That is the only quality that matters.

That doesn’t mean this is a simple process however. Humour is a complex thing. It is also a very individual thing and we have to acknowledge that many people will be biased in a situation where India are pitted against Pakistan.

Fortunately, dear reader, we can reassure you that we are wholly impartial here at King Cricket. We love the India cricket team and we love the Pakistan cricket team. You can trust us to draw fair and balanced conclusions.

First things first, both examples are magnificent. There is no such thing as a poor both-batsmen-at-the-same-end run-out.

There are however some key differences between the two examples.

The four main things you look at when rating the brilliance of a run-out are context, indecision, backstabbing and the margins.

The perfect run-out involves sufficient confusion that the two batsmen consciously race each for the same end in the knowledge that the loser will be dismissed. And ideally it should be close. Really close.

But Pakistan’s was against India.

Let’s call this one a draw.

For India, Jurel decided to run straight away and never really changed his mind. His partner, Ankolekar, only really gave the faintest shimmy to indicate any kind of agreement – he was pretty much committed to not running throughout.

In effect, both batsmen made a firm decision that they would try to make their ground at the bowler’s end. This is quite funny, because it is obviously a very poor conclusion to draw as a pair. Sadly, it is not as funny as Pakistan’s effort.

That moment where they changed their minds about eight yards down the pitch was the best bit. The two of them did a sort of synchronised ‘oh shit’ mime where they came to a complete standstill exactly simultaneously. Bats whirled in panic and after a nanosecond pause, they set off again.

The only thing left to decide at that point was who was going to be run out.

This one’s India’s. Jurel and Ankolekar both stretched for the line. Neither wanted to be dismissed. Extra points for choreography too. Look at the bats and back legs in the image further up the page.

Pakistan’s effort initially looked very promising, with Qasim and Nazir both sprinting alongside each other at one point, but then Qasim ruined it at the end by pulling out.

Nazir, it should be noted, is the team’s captain. That may be relevant.

India again, by a mile. Or rather, more accurately, by a millimetre. As Harsha Bhogle tweeted after watching a slow-motion replay: “Jurel and Ankolekar both outside the crease in one frame, both within it in the next.”

Technically, this is 2-1 to India, but you’re making a mistake there. You’re assuming that every category is weighted equally.

It wouldn’t have taken much for India to win this overall. A bit more confusion in the running and the blue-on-blue cruelty and fine margins of the dismissal would have carried it for them. But, like Dhruv Jurel, they fractionally fell short.