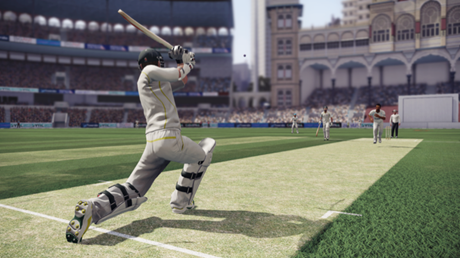 As we said in the main review, batting’s the harder of the two disciplines in Don Bradman Cricket 14. This is largely because you have to react to what’s bowled and if you don’t have the movements grooved, this doesn’t really happen.

So what are you reacting to? Well it would be pretty difficult to accurately gauge line and length on a TV screen, so the developers have come up with a nice little indicator. It’s basically a big, luminous circle which appears around the ball after it’s left the bowler’s hand.

If the circle’s red, it’s a short ball; if it’s yellow, it’s full; and if it’s green, it’s a good length. To judge line, you look at whether the circle is brighter on one side or the other. If it’s evenly coloured, the ball will pitch on middle and off. If it’s a C-shape from the batsman’s perspective, it’ll be going down the leg side if the batsman’s right-handed. If it’s a reverse-C then it’ll be wide of off stump.

So what you end up with is something like:

But obviously, different shots could be played to the same ball and that which will prove most effective will depend on the field.

This is where it gets a little tricky. Essentially, you play shots by moving the right stick and how well you connect will depend on choosing the right direction and timing the movement well. Stick direction relates to the direction in which you want to hit the ball.

But it’s not quite that simple. On the easier levels, you can get away with this one-stick approach, but on harder levels, you also need to control footwork. This is done using the left stick. Up is front foot. Down is back foot. We took to holding forward by default, pulling back if we saw the red outline (see above). That presumably makes us a front foot batsman, but we guess you could just as easily do the opposite and become a back foot player.

But that’s still not quite it, because you can also change the type of shot you play by holding one of the four buttons on the top of the controller while you do your stuff with the two sticks. These options definitely fell into the ‘premeditated’ category for us.

A better term for that last one is ‘the dickhead button’ because pressing it allows you to do all the dickhead shots, like ramps and reverse sweeps. It’s great fun in two-player mode.

This is the shittest bit. Although better than most cricket games, it’s still just a little too easy to get yourself run out. It would be good if the artificial intelligence could just overrule you when you’re trying to do something completely outrageous, like turning for a second run when the ball’s in the wicketkeeper’s gloves. We’re also not entirely sure it should always be necessary to press the ‘sprint’ button when taking a single. We’ve had several players run out while slowly ambling from one end to the other.

The biggest problem is judging when to run. You can set the camera angle to automatically change so that you get a decent view of where the ball’s gone immediately after you’ve hit it, but the main problem is that unless we’re missing something you simply have no idea where the fielders are in the first place. A little field setting graphic in the bottom corner’s the standard in other games, but there isn’t one here. You can look through the batsman’s eyes before the ball’s delivered, but this is time consuming and doesn’t really give you a proper feel for where the fielders are.

Another problem is that have to stand and judge when to run at the non-striker’s end in career mode. Although realistic, this is, quite frankly, boring.

Batting isn’t easy, but it does work pretty well and we reckon it could become pretty satisfying once the movements become second nature.