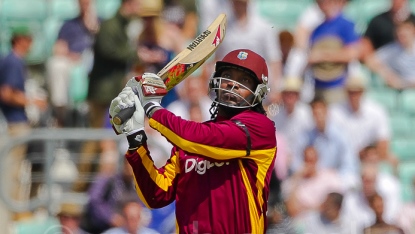 It’s generally best to avoid writing about Chris Gayle, because he seems to draw admiration – and therefore blog comments – from the biggest dickheads on the planet.

It’s not that there’s nothing to admire about Gayle’s batting. It’s just that a rich seam of knobheadery sits alongside rational, justifiable appreciation. Don’t follow his Twitter feed, because he frequently answers questions from what can accurately be described as his fans. These people exhibit an unironic level of hero worship that we find really depressing. Maybe we’re just embittered because they appear to find his non-jokes funny. There’s little more dispiriting than idiocy that also devalues what you do.

But back to sport, John Hotten has written a nice summary of how and why Gayle is such a singular cricketer in the shortest format. In essence, he’s reliable, but he also has an unusual ability to hit sixes once he’s played himself in. We’ve always been struck by how hard Gayle hits the ball with such little effort and we reckon it’s all in the core.

It’s not in The Core – you’d be hard-pressed to get anything useful out of that. It’s in the totally uncool sets of muscles that span your midriff. Gayle is known for being built like a masonry khazi with big cannonball shoulders and biceps which for some reason are always described as ‘rippling’ as if they’re flobbling about rather than solid. But there are plenty of batsmen who are – in the parlance of our times – ‘ripped’ and who don’t seem to hit the ball in the same way.

When you hit a cricket ball, you do so using a whole host of muscles. Your legs and torso are the foundations for all that follows. They are what braces against the impact of ball on bat and if they do not give, you get a better return from your cover drive/aimless heave.

Watch Chris Gayle play a pull shot and the power comes from the body, not from the arms. The strength’s not just about producing power, it’s also about producing controlled power. He can swing within himself and still clear the nearest sea.

The moral of the story is this: for all the apparent vanity of the man, he must also spend a lot of time developing practical strength and pragmatism is a quality even non-dickheads can admire.