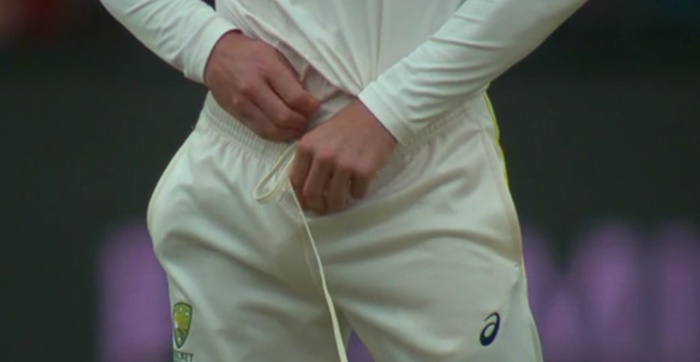 The Tamperer was an Italian dance music act. They had a number one with Feel It. The most memorable element of Feel It was that the bridge section (there wasn’t really a chorus) went: “What’s she gonna look like with a chimney on her?”

There you go. There’s a nice reminder for you. Feel free to have that play in your mind’s ear every time you see an interview with Cameron Bancroft, Steve Smith or David Warner. (There’s even a suggestion that someone ‘crossed the line’ in verse two.)

The terrible trio are inching their way back towards international eligibility and the interviews are arriving with ever-greater frequency. It seems a good time to rank their performances in exile according to how annoying they’ve been.

Quite miraculously, David Warner has been almost entirely non-annoying during his ban.

Yes, he stormed off the pitch when Phil Hughes’ brother sledged him, but that was more laughable than annoying.

Unlike Bancroft and Smith – who’ve been unnecessarily keen to shift responsibility for ‘the act’ onto his shoulders – Warner’s largely managed to resist the temptation to ‘open up’ about what happened. His latest interview is a deader bat than he ever presents on the field.

Smith has subtly rewritten his role in the sandpaper plot. His version now is: “I walked past something and had the opportunity to stop it and I didn’t do it and that was my leadership failure.”

As apologies go, there’s a certain amount of distancing going on there. Not so much, ‘sorry for the crime’ as ‘sorry for the dip in standards in my policing’.

Smith also did a Vodafone advert, the premise of which is built on the idea that “the way [Smith] responded to the situation head-on took guts.”

(Smith got the gig because he’s become an ambassador for the Gotcha4Life school programme which teaches teenage boys the importance of opening up. Hopefully all the money’s going to that or some charity.)

In the opening scene of Patriot, John Tavner shoves a guy in front of a van. He does this because they’re both going for the same job and John needs to get the job.

Cameron Bancroft did the metaphorical equivalent of this when he said: “Dave suggested to me to carry the action out on the ball given the situation we were in in the game.”

What was annoying about this was that it was totally needless. Everyone thought the sandpapering was all Warner’s idea anyway. To actually say as much is really just sticking the boot in.

In the same interview, Bancroft explicitly said that he wasn’t a victim while implicitly saying the exact opposite.

So essentially: ‘No, I’m not going to say I’m a victim – but if you want to draw that conclusion based on the picture I’ve painted of the environment I found myself in then there’s nothing I can do to stop you thinking that.’

There was also the 20,000 word open letter to himself which oscillated between self-aggrandisement and self-pity while maintaining a constant state of self-indulgence.

Sample quote: “You have no idea how amazing you are as a person. You have an ability to love others and not just love but even hug and understand others with compassion, strength and resilience.”

So yes, all in all Cameron Bancroft’s been the most annoying.