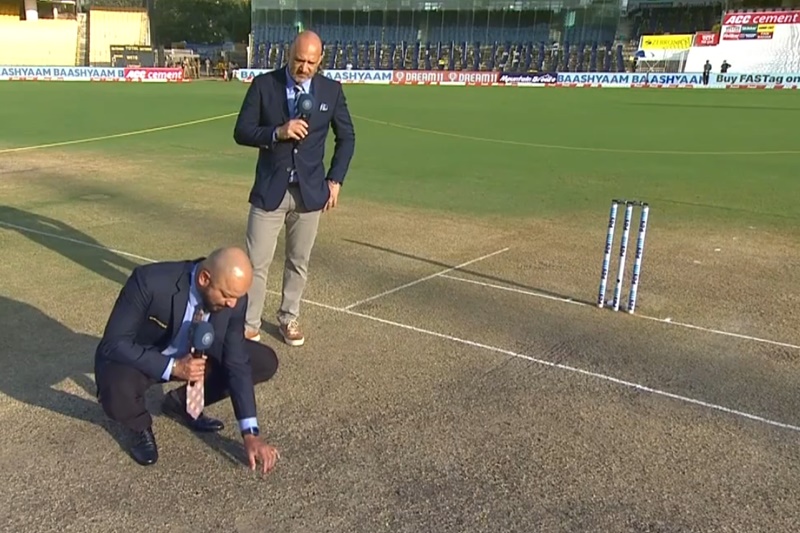 India just made 600 runs on what was in some quarters portrayed as being an UNPLAYABLE AND DISGRACEFUL DUST PIT OF SHAME. “It makes batting a lottery,” they said. If that were the case, India must have bought a hell of a lot of tickets.

There was a lot of predictable anger about the pitch in Chennai. That in itself is not very interesting. The immediacy with which those complaints arose is, however.

Touring teams often moan about pitches. As we reported in the first series of the Ridiculous Ashes, Australia went so far as to lodge a formal complaint in 1997 because they were of the belief that pitches were being fixed in England’s favour. They were leading 2-1 at the time and decided to make their feelings known immediately after securing an innings victory.

Complaining about other countries’ pitches is just a thing that people do.

England fans say one of two things for a Test played in India.

That second one often comes alongside an assertion about what pitches are “supposed” to do – which is invariably just something they’ve made up themselves.

What’s the problem with the ball turning?

If you want the ball’s movement to be perfectly even, true and non-threatening, you’re presumably also against cloud cover and that ball having a seam.

Quite obviously, sideways movement is not the issue. So what is it?

It’s the idea that the turn will become ever more pronounced and that the match will somehow descend into farce.

On the morning of day one in Chennai, there was a feeling that the pitch was already ‘breaking up’ and that by day three it would be unplayable. But that didn’t really prove to be the case. It wasn’t an easy pitch by any means, but it was still manageable enough that India’s number eight could make a hundred on day three.

That is not a bad pitch.

There are two main issues with a pitch breaking up. The main issue is that it could become seriously uneven and therefore dangerous. The second is that the bounce could become a bit random and that this could mean luck playing a far bigger role in determining the outcome of any given delivery.

Neither of those things really became a particularly big concern in Chennai. The pitch continued to offer plenty for the spinners, but it didn’t really ever become freakishly unpredictable. It held up okay.

For partly cultural, but largely climatic reasons, most British pitches aren’t very ‘grippy’. They only really offer spin when they deteriorate. A by-product of this is that UK cricket fans tend to see ‘turn’ and ‘deterioration’ as one and the same thing.

“If the ball is spinning,” they reason, “the pitch must be crumbling to pieces.”

Visible turn on day one therefore hits them alongside a parallel assumption that the match will become a joke before too long.

Early turn is therefore just a starting point – and quite often a fairer one.

Because marked deterioration of a pitch is a far bigger threat to the ‘fairness’ of a match than constant turn throughout the game. When a pitch gets significantly harder to bat on, it puts the team batting second at more of a disadvantage. (It is also worth pointing out that cricket is a fundamentally unfair game anyway and that overcoming both the opposition and any unfairness you’re presented with is actually half of the point.)

To wrap all of this up, while early spin can sometimes be the precursor to chaos, it is also possible for a ball to turn on the first day and for the pitch to stay pretty much in one piece for the rest of the match.

‘Turn’ and ‘deterioration’ are not the same thing.

Fancy yourself as the kind of person who supports independent writing and independent websites? Why not part with a pound a month (or more) to support King Cricket via Patreon.