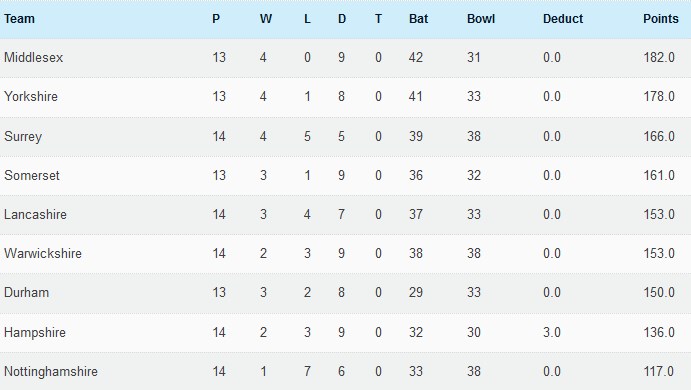 Before the latest round of County Championship matches, Yorkshire were five points adrift of Middlesex. NOW THEY’RE ONLY FOUR POINTS BEHIND.

Truly, it was the definitive week of this year’s competition. Eight teams were in action and the points accrued ranged from 8 to 11 as everyone drew.

Nottinghamshire were the big winners

They picked up those 11 points against Durham, who scored nine. This moves Notts up to bottom of the table.

Nottinghamshire’s Jake Libby made 144, which was downright unseemly when set against all the low scoring that had preceded it. Not to be outdone, Keaton Jennings made 171 not out. How many runs has he made this season? An awful lot. 1,262, including six hundreds. No-one has scored more.

9-8. It’s a good thing Middlesex and Yorkshire play each other in the last match of the season, or the climax could be a snail’s pace crawl to the line, weaving between the raindrops.

This was a less-than-excellent pitch, although it’s also worth noting that neither side’s attack is ‘all that’. Tom Abell and Peter Trego made hundreds as Somerset sauntered to 553-6. Alviro Petersen made 155 for Lancashire. Liam Livingstone, who started the season as a specialist number seven batsman, came out at three in what may or may not be ‘a development’.