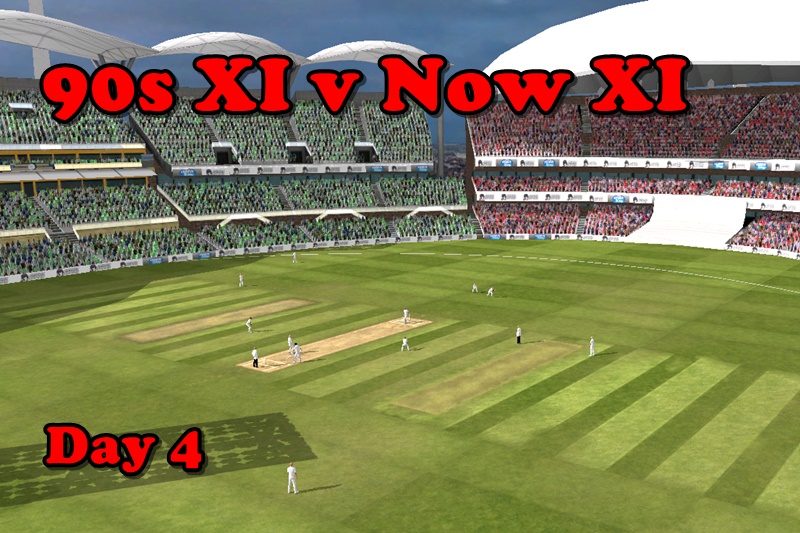 The 90s XI leads by 264 runs with nine second innings wickets in hand.

We’re not a million miles away from declaration batting.

Pat Cummins and Mitchell Starc open the bowling under slate grey skies. Jason Holder has got a couple of slips in.

Gooch is enjoying himself until he’s beaten for pace by Starc.

Sachin Tendulkar walks to the crease.

These are tough conditions and after a number of chances, The Wall edges Starc behind for 40.

Brian Lara walks to the crease.

It’s Sachin Tendulkar and Brian Lara, batting together. This kind of scenario is precisely what this match is about.

Lara is caught and bowled by Holder for one.

Jacques Kallis – who, despite his first innings hundred, really isn’t what this match is about – walks to the crease.

Holder is unplayable here. He’s beating the batsmen again and again and not conceding a run.

Tendulkar is pretty good at cricket though. He sees off the West Indian and sticks it out until lunch.

We had visions of batting carnage, but Test cricket is rarely easy.

What do you reckon? 100-and-odd runs and then a declaration at tea? Maybe just before? That’s perhaps easier said than done in these conditions.

Not long after the break, Nathan Lyon has Kallis stumped for 19.

Andy Flower walks to the crease.

Tendulkar is LBW to Starc for 48.

This might not be a declaration situation after all.

Wasim Akram walks to the crease.

Clearly of a mind that he’s going to be out soon no matter what he does, Wasim starts swinging.

Anil Kumble walks to the crease.

Irritated by Lyon’s success, he hits the finger spinner for successive fours.

Seemingly incapable of having bad things happen to him, Lyon then bowls Kumble.

Curtly Ambrose walks to the crease and immediately asks Flower why he’s on 13 off 53 balls when they’re supposed to be setting up a declaration.

Rattled, Flower unfurls a booming on-drive and edges behind.

Waqar Younis inside-edges a delightful four past his stumps and then Ambrose is bowled by Starc for three.

The Now XI need 421 to win in a smidge over four sessions.

It is still cloudy. Ambrose goes past Warner’s outside edge in his opening over. Wasim has an LBW shout against Rohit in his.

Gooch throws in another close catcher.

Ambrose again beats Warner in his second over.

The tea break is largely devoted to Shane Warne moaning that Gooch isn’t being aggressive enough with his fields. The Australian seems disproportionately agitated, like he’s personally offended somehow.

Rohit edges Ambose to Flower for a flukey five.

Kane Williamson walks to the crease and just crushes Curtly’s first ball to the fence.

Slowly but surely, the chances start to dry up, at which point Warner miscues Wasim straight to mid-off. Slower ball maybe? Let’s be generous and say that it was.

Virat Kohli walks to the crease.

Waqar Younis comes on to bowl at toes.

Williamson is picking Kumble, but the leg-spinner traps Kohli for 22.

Steve Smith skitters to the crease and starts tapping at his clothing like a mad person.

Jacques Kallis reluctantly comes on for an over or two.

Kumble continues to have a not good time against Williamson.

Or sign up for our email to have day five come to you.