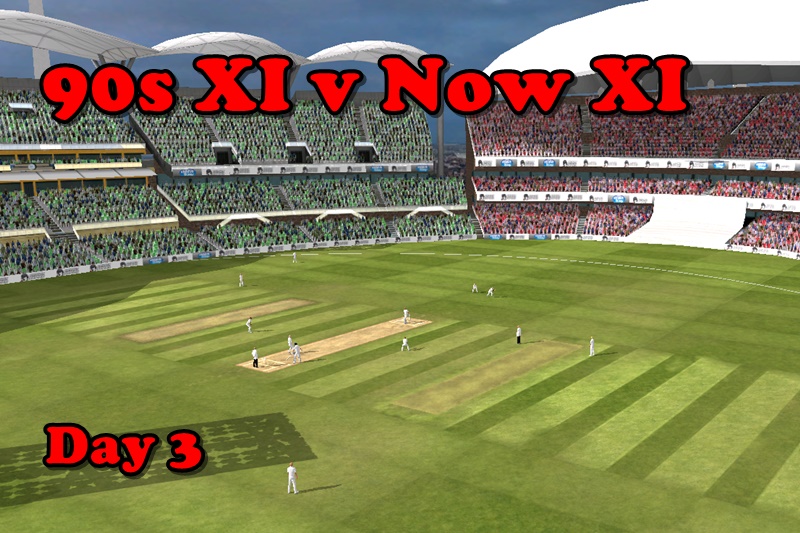 Here’s the match situation. No comment from us on any of this because we’re completely impartial.

It’s going to be a pivotal day.

Kane Williamson and Virat Kohli walk out. The 90s XI open with Wasim Akram and Waqar Younis. Because they can.

Waqar beats Williamson with his first delivery and then Kohli jabs down on a yorker but only succeeds in popping it back up to the bowler. He’s gone for 12.

Steve Smith fidgets his way to the crease. Are you sure your pads are in the right position, Steve? Don’t worry. Take your time. Don’t forget to check your box 12 times as well.

Runs are less than plentiful, but eventually the two Pakistanis start to tire and Graham Gooch makes a double change, replacing them with Curtly Ambrose and Anil Kumble.

Curtly starts bouncing the shit out of Kane Williamson. The Kiwi opts mostly for ducking.

At the other end, Kumble is for some reason going for a few.

Not knowing quite what to do, Kumble goes round the wicket, at which point he starts conceding even more boundaries.

Gooch opts for Waqar and Ambrose after the break.

Ambrose traps Smith LBW one ball after the Australian brings up his 50 with a four.

Marnus Labuschagne make his in-no-way-controversial appearance at the crease.

Ambrose has an LBW shout against him. Not given.

After half an hour, Wasim replaces Waqar and he too starts aiming at the batsmen’s toes.

But it’s again Ambrose who gets the breakthrough, Williamson edging to a diving Kallis at second slip. (This is 90s vintage Kallis, so diving is actually an entirely credible thing for him to do.)

“The game is poised,” says Nick Knight on commentary, rather unnecessarily.

“This is a crucial passage of play,” he adds.

Labuschagne skews Wasim to Old Man Gooch at short leg for 3. Was he the right choice? Maybe the Now XI should have picked Roston Chase instead.

Ambrose is looking weary, but with Jason Holder fresh to the crease and Quinton de Kock on 1, he’ll bowl one more over.

He’s then replaced by Kumble who seems to have resolved to bowl a little straighter.

Holder is beaten by Wasim’s reverse and is LBW for two.

Mitchell Starc is beaten by Wasim’s reverse and edges to wicketkeeper Andy Flower for a duck.

Wasim bowls slightly too long a spell, striving for a fifth wicket. The ball’s reversing though so it’s no catastrophe for Gooch to haul him off in favour of his countryman.

Younis arcs one away from de Kock, who edges to Bucket Hands Kallis at slip for 19.

Younis has him caught behind for a golden duck, which is no less than he deserves for being who he is.

Gooch celebrates with some sort of yoga dance.

There’s a tricky 10 minutes for Gooch and Saeed Anwar to negotiate here before tea, but a solid start and it’s going to be almost impossible for the Now XI to get back into this.

After five overs, Holder is positioning just one slip for his bowlers.

Anwar is really struggling though and edges behind for seven.

BRING ON THE WALL!

Gooch inside-edges Cummins but de Kock can’t take the chance. Other than that, the batsmen are just ticking along. It’s only day three. There’s no real rush.

Nathan Lyon comes into the attack and his first over goes for nine. Maybe the dark magic is wearing off.

By his fifth over, he is bowling without attacking fielders. He conjures an LBW shout against Gooch. Bit optimistic.

Gooch minces him for six over point. A pair of fours off Starc in the next over and the 90s XI captain has his 50.

So far the 90s is looking like the stronger and better decade in this entirely impartial watertight experiment of ours.

The 90s XI leads by 264 runs with nine second innings wickets in hand.

Or sign up for our email to have day four come to you.