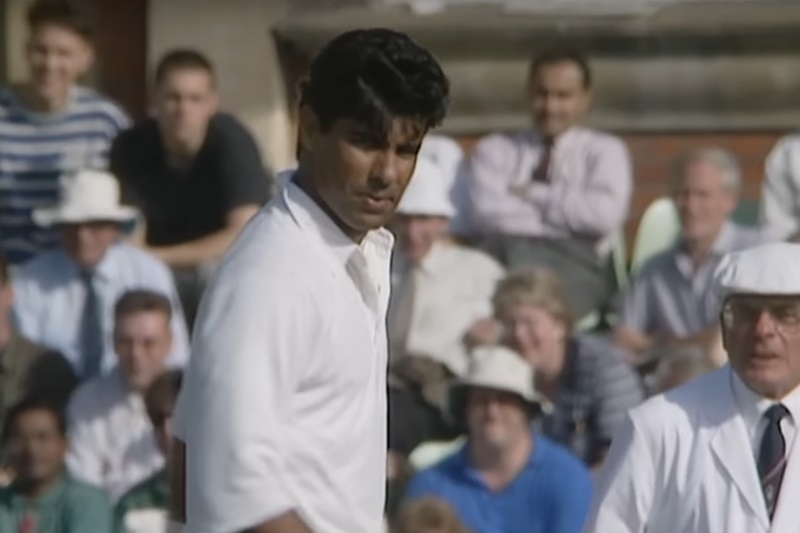 After we announced that this particular Sim Series Test was going to take place, there was quite a lot of discussion about who should be in the teams. If we can make one observation/criticism about those comments, a number of you appear to be treating this the same way you would a Wisden- or ICC-selected World XI.

When outlining our (admittedly amorphous) selection criteria for this team, we said that it didn’t matter what you did in adjacent decades; you were eligible so long as you were one of the big players during the qualification period.

A year later he made 154 not out against a West Indies attack comprising Curtly Ambrose, Patrick Patterson, Malcolm Marshall and Courtney Walsh. The next highest score was 27. It was England’s first home win against the Windies for 22 years.

Of course Gooch is in.

As we’ve established, batting was tough in the 90s and opening was tougher still. People don’t talk about Saeed Anwar all that much, but playing as an opener, he scored over 3,000 runs in that decade at an average of 48.

Rahul Dravid, the barometer of class. Averaged a snip under 50.

Throughout the match, we will be referring to Dravid only as The Wall.

The Wall was a great nickname. It summed up his strength and resilience perfectly, but also… The Wall? A wall is just about the most static, unremarkable thing there is.

What a fantastic sport where being likened to something so fundamentally motionless as a wall is considered a massive compliment.

The only real question in the middle order relates to batting order. Sachin first seems to make more sense to us.

Tendulkar played 69 Tests in the 90s – a mere fraction of his career. In this period he hit 22 hundreds and averaged 58, which was five runs more than anyone else.

Hey, here’s a thing that some of you know but some of you don’t: When we started the first incarnation of this website back in 2006, we kicked off with a top ten of players of that time and the winner – Brian Lara – was crowned ‘King Cricket’.

We specifically used the term ‘King Cricket’ because we thought it was a really dumb, stupid title and we thought that was funny. Then that post scrolled off the front page and everyone arriving at the site from that moment on started calling us King Cricket and now apparently that’s our name and we just to have to put up with it forever.

No-one has ever batted quite like Lara at his best.

One of the more contentious selections here.

If you’re going to pick an all-rounder (and we weren’t quite satisfied with the part-timers in this team, which is why we have) then you only really have four credible options who played any meaningful volume of international cricket during the qualification period.

Turns out the 90s was pretty shit for all-rounders.

No enormous surprise that three of them should be South Africans, given how they selected their team back then.

His selection isn’t immediately very satisfying because of course he was way better and played a lot more in the following decade. But that doesn’t change the fact that he was the best all-rounder in the 90s.

Sorry, but he was…

… unless you’re one of those ‘wicketkeepers are all-rounders’ people, in which case Andy Flower was the best all-rounder in the 90s.

While playing for Zimbabwe.

This whole thing is basically just a way for us to have Wasim and Waqar on our team for once.

This is the other big contentious selection, we reckon.

Here’s a thing though.

As we’ve written before, Murali went up a level in around 1998. Before that his record was a little less jaw-dropping.

Even though the Sri Lankan still averaged a smidge less than Anil Kumble during the 90s, the latter took a few more wickets (264 at 27.80).

And there were literally no other spin bowling options worthy of consideration.

Not a single one.

Here’s the thing we wrote for The Wisden Cricketer’s ‘My Favourite Cricketer’ section back in 2010.

When we play this match, we’re having Waqar bowl nothing but yorkers.

There are lots of possible right answers when it comes to filling the fast bowling slots in this team, but 309 wickets at 20.14 feels about as right as right can be.

Plus Curtly tessellates well with Wasim and Waqar in our opinion. Left arm, right arm; new ball, old ball; tall and slingy – boxes are being ticked with this fast bowling attack.

Also why not sign up for our email for more of this kind of idiocy.