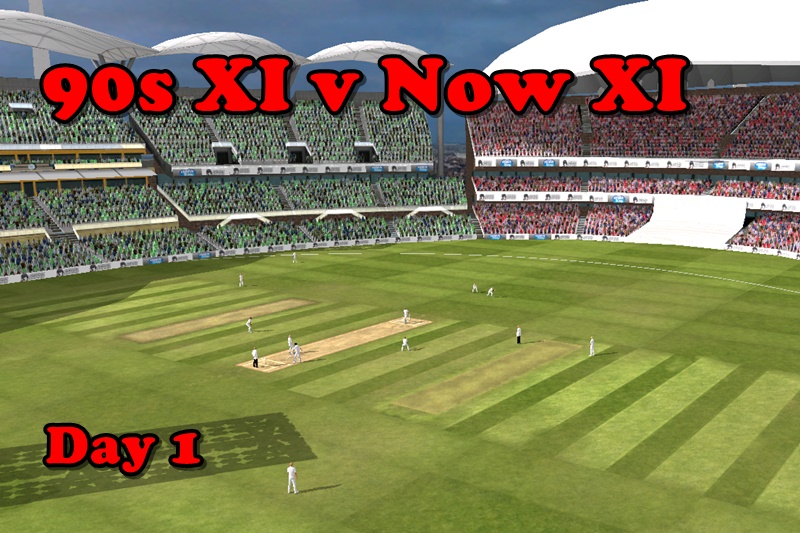 Let’s start with teams and stats. Partly because we imagine you want to pore over the averages, but mainly because there’s a 12th man joke we want to do.

We thought long and hard about who should be captain and decided that Andy Flower should be because he always seemed to thrive on responsibility.

Then when we were shuffling everyone about, we realised that Graham Gooch was way older than everyone else and it just seemed more fitting that he’d be captain.

They’re up against the Now XI.

Captaincy decisions here too. Loads of things to weigh up, but in the end we just figured that Jason Holder was the best captain.

The match is being played at the Now XI’s home ground, whatever the hell that means in practice. Probably just that no-one’s allowed in to watch.

There’s a slow outfield and looks like there’ll be a bit of cloud around later in the day, but Gooch is a by-the-book type and opts to bat.

Anil Kumble to win it on day five – that’s our prediction.

Gooch walks out with Saeed Anwar and takes the first ball from Mitchell Starc.

A couple of singles and then it’s Pat Cummins from the other end.

Holder brings himself on for the 13th over. Brace yourselves for some seam movement, 1990s cricketers.

Virat Kohli somewhat surprisingly bowls the 14th over. Brace yourselves for some dibbly-dobbly medium-pace, 1990s cricketers. (Maybe the Now XI could have done with an all-rounder after all.)

In the 17th over of the day, Anwar hits the 90s XI’s first four. It is a bold on-drive across the line that dribbles down to fine leg off the inside edge.

Nathan Lyon comes on and Anwar carts him for four rather more convincingly.

Steve Smith filth! Maybe it WAS a good decision to deny them an all-rounder.

Gooch cuts him for four.

It’s similar stuff immediately after the break. It’s dull enough that the commentators are already throwing forward to what might happen later in the match. They show the scorecard and Nick Knight says “plenty of batting to come”.

Starc beats Gooch. It’s quite possibly the first play and miss of the day.

Lyon gets Anwar caught behind.

BRING ON THE WALL!

The Wall sweeps Lyon for four first ball, which is no less than the bowler deserves for being who he is.

The Wall straight drives Starc for four next over. You wouldn’t have had money on The Wall being the one to up the run-rate.

Gooch thinks it looks like fun and tonks Lyon to the boundary, which is no less than the bowler deserves for being who he is.

Gooch then plays a back foot defensive shot against the same bowler and inside-edges it almost for six. Physics be damned.

After further boundaries off Lyon and Holder, Gooch passes fifty. We might finally be up and running in this match.

Cummins cuts him in half and appeals for caught behind. Not given.

Gooch cuts him for four.

Tendulkar takes a single and ah crap. Lyon appeals for LBW against The Wall and it’s given. Two wickets in the over. To Nathan Lyon.

Hawkeye reckons it hit The Wall in line.

Hawkeye must have had a few 9% Belgian tripels or something. (Although before you cry ‘gross miscarriage of justice’, it’s worth pointing out that if anything it’s The Wall’s ghost that’s wrong there and actually it did look like quite a good shout ‘live’.)

Brian Lara and Sachin Tendulkar are batting together.

Brian Lara and Sachin Tendulkar are batting together against… Nathan Lyon.

Who had Nathan Lyon down to be player of the match? Anyone? Anyone?

Lyon beats Lara in the first over after the break. (This is bullshit.)

And again. But then Lara punches him back down the ground for four, which is no less than the bowler deserves for being who he is.

Nathan Lyon bowls Brian Lara for 14. Cricket is a ridiculous and painful sport

Kallis and Tendulkar bat like Nathan Lyon is just Nathan Lyon for a bit and then the Now XI take the new ball.

Or sign up for our email to have day two come to you.