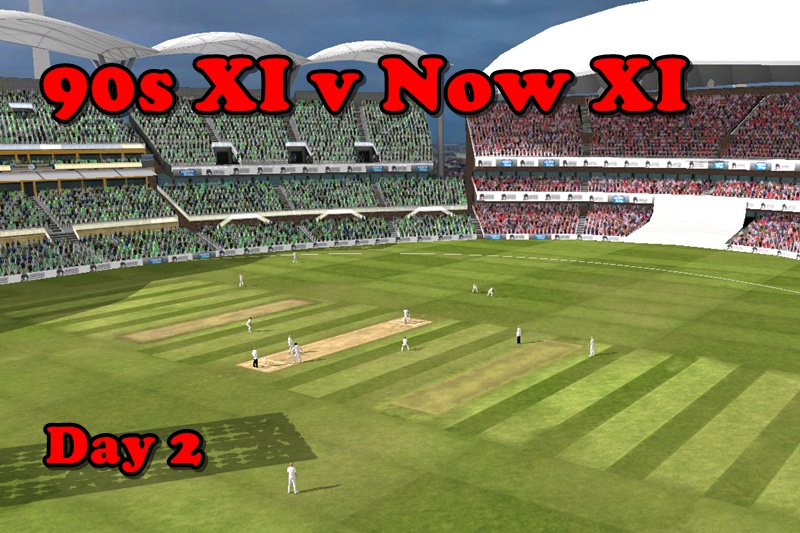 Day one was fairly stupid in that Nathan Lyon took four wickets.

No matter which team you’re supporting, let’s hope that’s the end of that sort of nonsense.

A simple drop-and-run gets Tendulkar to 50. After that, he just gets into that Tendulkar cruising zone where no-one really notices what’s happening but then at some point the bowling attack goes: “Hey, wait a minute. Are we being very quietly taken apart here?”

Kallis, meanwhile, is just Kallis, which is to say he does a similar thing but in a much less cool way.

Ten minutes before lunch, the South African reaches a 50 you’d struggle to remember.

Other than one over for Virat Kohli and one over for Steve Smith on the first morning, Jason Holder hasn’t given anyone outside his main four a bowl. He’s pretty much just rotating his quicks with Lyon on at the other end.

Lyon gets Tendulkar LBW for 82.

Looked like a quicker one. The Little Master had his mind on a little lunch, it seems.

Andy Flower gnarls his way to the crease.

What is this shit? It’s the first innings and Lyon has taken the first six wickets to fall.

Wasim Akram does the decent thing and immediately gets out to Pat Cummins, so ensuring that A Very Bad Nathan Lyon Thing cannot happen.

Anil Kumble walks out (and is probably quite interested in how this pitch is playing).

Kallis, now on 83, offers Holder a fairly straightforward caught and bowled chance, which he completely fails to take.

Kumble is LBW to Starc for 8.

Kallis reaches three figures. He waves his bat while pretty much everyone else on the field of play momentarily turns into statues, except for David Warner, top-right, who does some sort of hand jive dance.

The session recommences with Curtly Ambrose on-driving Nathan Lyon for four. This is the kind of thing that should have been happening throughout.

Lyon then bowls Ambrose, which is the kind of thing that actually has been happening throughout. Somehow.

Lyon now has the ludicrous figures of 7-128.

Waqar Younis walks in and sweeps Lyon for four, which is the kind of… ah, forget it.

That’s a question for later though. For now it’s Wasim Akram and Curtly Ambrose bowling to David Warner and Rohit Sharma.

Depressingly, Warner hits each of them for four in their opening overs. Then Rohit joins in. This pitch has not been kind to the seamers.

Wasim isn’t one to be fazed by a crap pitch though. He bowls Warner for a run-a-ball 15 and it is everything you dreamed it would be.

Rohit edges Ambrose to slip for 23.

Kohli and Williamson versus Ambrose and Wasim anyone?

Waqar will be bowling nothing but yorkers because that’s the way things should be. Williamson clips the first one off his toes for four. Kohli plays the exact same shot next over.

With two overs remaining, Kumble comes on. He beats Kohli with a top-spinner but fails to find the edge.

The 90s XI have made what we are legally obliged to refer to as ‘early inroads’.

Or sign up for our email to have day three come to you.