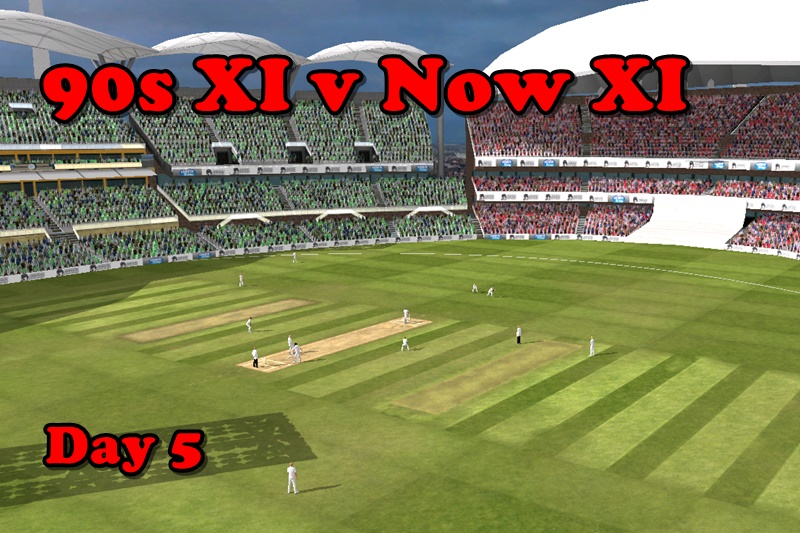 And here’s the match situation at the start of day five:

The 90s XI seem overwhelming favourites, but commentators always go on about how modern players will try and chase down any total and 300 in a day isn’t beyond the realms of possibility.

Whatever happens, by the end of the day we will have identified the better cricket era, once and for all.

Kane Williamson and Steve Smith are the batsmen. Wasim Akram and Waqar Younis are the bowlers.

Anil Kumble, meanwhile, has been kind of cack. It’ll be interesting to see what happens when he comes on to bowl.

The ball is 35 overs old, so Wasim is bowling full, looking for reverse swing. In his third over of the morning, he gets Kane Williamson caught at slip.

Marnus Labuschagne, whose selection in this team was in no way controversial, walks to the crease.

At the other end, Kumble replaces Waqar and has a big, loud shout for LBW against Smith second ball.

Pitched outside leg, missing leg, but otherwise a good appeal.

It’s worth emphasising that the 90s XI has been at a MASSIVE disadvantage when it comes to the decision review system (DRS) and this has definitely made up for any potentially questionable selection decisions in the Now XI.

What we’re saying is that if the 90s XI win, it’s completely legitimate to say that the 90s had better cricketers.

Labuschagne hits Ambrose for a couple of nice fours.

The South African Australian is looking good against the quicks, but then completely misreads Kumble’s googly and that one really is out LBW, clipping leg.

With five wickets down, the Now XI need 277 to win.

With 20 minutes to go until lunch, Jacques Kallis reluctantly comes on to bowl a couple of overs.

Jason Holder walks to the crease.

Holder hits a couple of fours and then skews Wasim to short leg.

Mitchell Starc walks to the crease.

Waqar has an LBW shout against Starc. Not given.

Wasim has an LBW shout against Starc. Given.

Pat Cummins walks to the crease.

Wasim gets Smith caught and bowled.

Nathan Lyon walks to the crease.

Waqar has an LBW shout against Cummins. Not given.

The chances start to dry up. The new ball is almost due, but Wasim and Waqar have gone on a little too long here, so what is Gooch going to do? Ask a reluctant Kallis to take the new ball?

Kallis reluctantly comes on to bowl a couple of overs with the old ball.

Kallis’s reluctance to continue is too great and so a visibly-knackered Wasim comes back at the other end. He swings it a mile to beat Lyon but somehow fails to make contact with bat, pad or stumps.

In his next over, he beats batsman and wicketkeeper and it’s four byes. Then he befuddles Lyon, who squirts one to short leg, but also Gooch, who can’t take the catch.

After just three overs, Wasim’s on his knees and has to make way for Waqar, who it has to be said isn’t looking a great deal sprightlier.

The 90s is officially the better cricketing era, by miles (155 runs).

In the post-match press conference, members of the Now XI make feeble complaints that don’t remotely stand up to scrutiny.

David Warner takes to Twitter to make his feelings known. The platform hides his tweets behind a warning, flagging his comments as disputed and potentially misleading.

Even though Wasim took nine wickets and Kallis hit an unbeaten hundred, Gooch is for some reason named man of the match for his two fifties.

The moral of the story is that if you put Wasim and Waqar in the same team as Sachin Tendulkar, you will probably win.

Steve Smith, Virat Kohli and the rest of the Now XI should take long, hard looks at themselves for failing to be any of those three people, or even Jacques Kallis.

This website is funded by its readers, who are very fine people indeed. If you’d like to know more, check out our Patreon page.