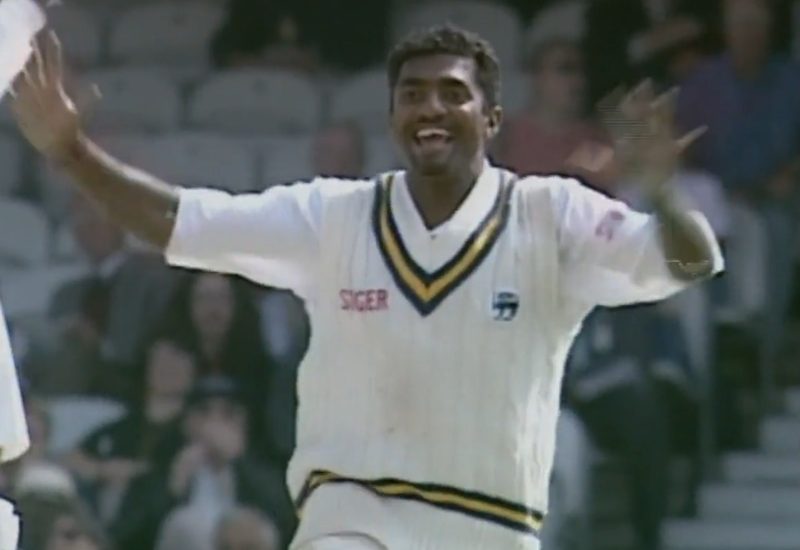 In 1998 Muttiah Muralitharan took 16 wickets in a Test match against England at the Oval. But honestly that isn’t even the half of it.

Only one person has taken 800 Test wickets and it’s easy to think that’s what makes Muttiah Muralitharan unique.

But we need to take a step back and view him anew from afar, because really the 800 Test wickets is just a tiny, tiny part of the reason why Murali is so magical.

To explain this a little better, we’re now going to tell you a story about a Scottish cyclist.

In the early Nineties, Graeme Obree’s bike frame building business went bust and he concluded that the simplest way out of his financial problems was to break the hardest record in cycling – the hour record.

The hour record is a straightforward thing. It’s how far you can ride your bike in an hour. At the time, the record (51.151 km) had been held for almost a decade by Francesco Moser and people had pretty much given up on trying to break it.

Moser had taken the record off Eddy Merckx, you see, who is cycling’s Don Bradman, if Don Bradman had also been a hell of a bowler.

Moser had to employ all manner of engineers, data scientists and aerodynamicists to achieve the feat.

Obree embarked on the quest alone and the very first thing he did was invent a new kind of bicycle.

He used the bearings out of his washing machine.

In July 1993, Obree booked the Vikingskipet velodrome in Norway for 24 hours and made an hour record attempt. He failed by almost a kilometre.

He had the velodrome for a day though, so he told everyone that he’d try again in the morning.

It wasn’t just bike building where Obree had his own way of doing things – it was athletically and nutritionally too. (Our favourite story is of him standing by the side of the road before a time trial, eating jam out of the jar with a spanner.)

To keep from seizing up overnight, Obree he use of what he called “the bladder alarm.”

Writing in his autobiography, he said:

“I knew that I could not sleep long before my muscles really stiffened up, but I did not want to set an alarm because it wakes you from a deep sleep with such a start that the overall effect would be exhaustion by the morning.

“Instead, I used the ‘bladder alarm’, which is a technique of drinking loads of water before going to bed. It would only be an hour or two before I would waken in need of the toilet, but before going back to bed, I would do five or ten minutes of deep stretching, have a small bowl of cornflakes for carbohydrate, and another load of water. And so the cycle went, five or six times during the night.”

In the morning, Obree woke from his last bladder cycle, had another bowl of cornflakes, rocked up at the velodrome and broke the hour record.

It is not often that someone comes up with a whole new way of doing something and conquers the world with it. Anyone who does that is very, very special indeed.

A few people are famous for inventing – or for being the first to perfect – a particular delivery. Flippers, doosras, even reverse swing – someone came up with them all.

Murali did more than this. He invented a whole bowling style; a whole new way of spinning the ball – off-wrist-spin, you might call it. Murali came up with this method and then he used it to become the top Test wicket-taker of all time.

But that doesn’t really capture why he was such a one-off. You also have to throw in the fact that not everybody could ride Murali’s bike. It was built for him and him alone. His method wasn’t a new path for cricket to travel down. It was a quite majestic cul de sac.

The reason for this is simple: only the tiniest proportion of people on Earth are physically capable of moving their body in a way that makes off-wrist-spin possible.

The long and short of it is that because of his mad shoulder, Murali could basically deliver the ball backhand.

Where your palms point inwards when you stand with your hands by your side, Murali’s point forwards. There’s plenty of wiggle room in that shoulder too.

Still images don’t really do it justice. You can probably get your arm into some of the positions seen during Murali’s bowling action. The question is whether you can get into those positions from where the arm was a nanosecond before. The answer is almost certainly not.

Throw in a wrist that flaps around like washing on the line during a hurricane and you’ve got quite the mix.

Channel 4 did a good thing on his technique back in the day. Sky have done one too. (The Channel 4 one features one of our all-time favourite quotes: “With this brace on, I can still spin the doosra quite amazingly.” Murali’s ability was so extraordinary that even he was amazed by it.)

Side-on footage of Murali’s top-spinner gives you a good sense of what he was capable of. (Find a private place before you try and copy this or you’ll look like a mental.)

Murali had several different deliveries, but the top spinner gives you the clearest idea how it all worked. That’s the basic freakish mechanism underpinning it all. That’s how you bowl wrist-off-spin in the highly unlikely event you are blessed with the necessary shoulder and wrist.

To recap: Muttiah Muralitharan invented a whole new bowling style that only he can utilise and then he used it to take more wickets than anyone ever.

Oh, and there was also the sheer theatre of it.

This is what Murali looked like every single time he bowled a cricket ball.

He should be considered a great for that look alone.

Even at the time, a lot of people felt this warranted a place in the pantheon of piss-takes. Now that we know how the game panned out, it seems even more ludicrous.

Sri Lanka felt slighted. However, concluding that actions would speak louder than words, they set themselves to winning the match.

They prepared well, playing five matches against counties in the lead-up. Come the Test, they won the toss and Arjuna Ranatunga decided to bowl.

It’s worth reflecting on what Murali’s record was at this point. For a man who took more wickets than anyone, he was a surprisingly slow starter (relatively speaking). Before the Test, he had 187 wickets in 41 matches at an average of 28.03.

Nevertheless, Ranatunga knew what he had. He knew that Murali was the only way Sri Lanka would win the match and that they could only win the match if they put on a colossal first innings.

So he bowled first. The plan was that Sri Lanka would bowl England out for whatever, bat past them and then unleash their primary weapon.

Speaking to Cricket Monthly, coach Roy Dias explained: “If our batsmen scored heavily in the first innings, we wanted to give Murali some time to rest in between innings, rather than worry about imposing a follow-on.”

Talk about commitment to a goal.

So the important thing to remember here is that Murali bowled in the first innings of the match. That is not generally considered a great time to be bowling spin.

“Nobody could take many wickets because in the first innings the pitch was so flat,” remembered the man himself. “I was bowling at one end and getting a few wickets here and there. It was not that successful a first innings, even though I got seven wickets.”

Sorry, what? Can we have that again?

“It was not that successful a first innings, even though I got seven wickets.”

It’s safe to say Murali has his own standards.

It is however worth pointing out that those seven wickets took him 59.3 overs (357 deliveries). This is another aspect of Murali’s brilliance that is often overlooked. The man could not merely shoulder a workload, but continue to threaten throughout.

By the end of his career, Murali had bowled over 50 overs in an innings on 31 occasions. The next highest number is 19 by the West Indies’ Lance Gibbs. These weren’t innings when he was getting flogged. He took 123 wickets. This was putting a shift in and getting the job done. This was work.

Murali took 7-155 in that first innings, Graeme Hick and John Crawley both made hundreds and Sri Lanka finally got to bat deep into day two.

England’s spinner for this match was Ian Salisbury. Our favourite comment on his selection is this brutally matter-of-fact quote from Darren Gough: “Because of the state of our spin options, we knew the seamers had to knock them over.”

England’s seamers did not knock them over.

Sanath Jayasuriya went nuts. He made 213 off 278 balls, while Aravinda de Silva hit fours wherever he damn well pleased and made 152.

Sri Lanka were eventually all out for 591 and even Murali got runs.

“Murali’s quick 30 was the final nail,” said Gough. “I found Murali frustrating. He never used to fancy batting against me, because I bowled the ball at a decent pace, but he’d always back away and middle it.”

Murali was a fine batsman.

Now it was time for business. And the pressure was on.

It’s easy to think these things come naturally to the greats; that they are by definition people who cope with expectations easily.

“Just before we’d field he’d sometimes go to the bathroom to throw up, he was that nervous,” Kumar Sangakkara told Wisden. “And that was after he’d taken 700 wickets.”

On this occasion, Sri Lanka were fighting for more than just a Test win. They were fighting for respect, for a viable future as a Test nation. And it was all down to Murali. He probably had a quick look at the porcelain before he headed out.

There’s a certain rewriting of history that somehow the Oval was an absolute raging turner for that match, but as Murali said himself, “if you score 445 and 590, how can it be spin-friendly?”

It’s clear that the pitch hadn’t completely crumbled when you see that Gough would go on to make a ball hundred, surviving for 133 balls.

The other wicket was a run out.

It was pure brilliance. You can watch the wickets here.

Sri Lanka made 37 runs in five overs and secured their first away win against England.

To put all of this in context, Murali’s first innings effort was right up there among the very best epic 50-over-plus bowling performances of all time. He then followed it up with an even better one – the second best, in fact, after Jim Laker’s 10-for.

It wasn’t just that he took 16 wickets. It was that he bowled over 100 overs to take 16 wickets having been given just one chance to stick it to England – and he did it using his own homemade technique that no-one else will ever be able to copy, grinning his damn head off throughout.

“Suddenly next time we visited England, we were getting three-Test series,” he said.

Thanks, as always, to all those who are helping fund the site via Patreon. We only have time to write features like this because of you. Anyone else who likes what we’ve been doing and wants to see more of it, please feel free to chip. You can flip us a shiny coin or buy us a pint each month here.