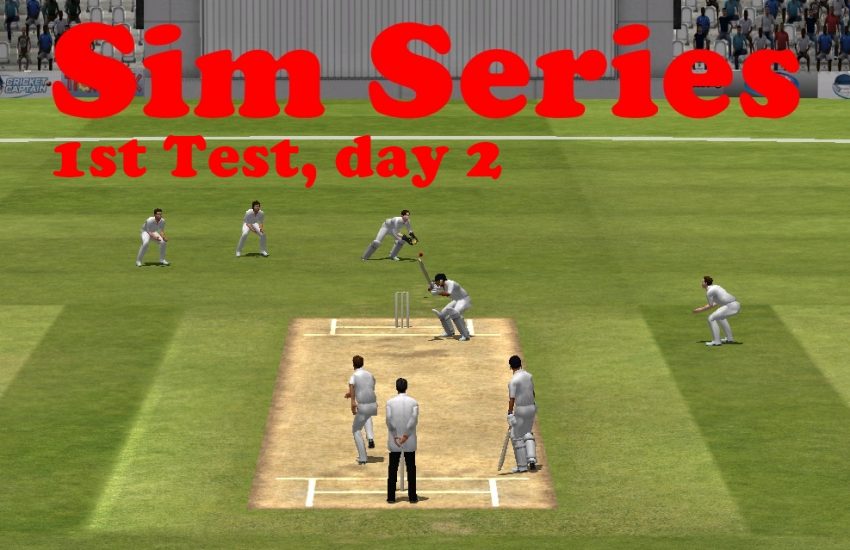 Day one of the first Sim Series Test between Sri Lanka and England was… well, it was absolute dogshit, wasn’t it?

England resume their innings under clear skies on 179-1.

Aware that they have been getting nowhere slowly, England’s batsmen show a little more urgency and Herbert Sutcliffe positively careers to a 130-ball half-century.

Alastair Cook is LBW to Chaminda Vaas for 87, which brings Wally Hammond to the crease. Dizzyingly, Hammond is described as tending towards ‘average aggression’ as a batsman. He duly takes a run off his first ball and then hits a four.

“Strap in, folks,” says Jonathan Agnew on commentary, deciding for some reason to talk like Mark Nicholas.

Shortly after this, Hammond is bowled by Muttiah Muralitharan for 10. Oh no, Murali is up and running.

At lunch England are 267-4. This could go either way really.

When Pietersen is LBW to Murali for 46, England are looking decidedly wobbly. Ian Botham arrives at the crease and resolves to sort things out.

After five balls – all delivered by Muralitharan – Beefy is on 15. At the other end Vaas bowls Ben Stokes off a no-ball.

Blessed with a reprieve and inspired by Sir Beef, Stokes engages the long handle.

Botham is stumped off Murali.

Stokes retracts the long handle. Nevertheless, he reaches 50 off 67 balls.

At tea England are 392-6, which is much less shit than everyone expected.

“That’s much less shit than I expected,” remarks Agnew.

Murali has really got through some overs.

Stokes is slightly becalmed, but reaches his hundred off 175 balls. He raises his bat and waves it around and all that stuff.

Knott reaches 50 too, but barely acknowledges it. He is out in the final over of the day for a somewhat unexpected 70.

England are 486-7 and no-one knows why Jayawardene keeps bringing himself on for the odd over.

Join us tomorrow for day three when England will no doubt have a bit of a thrash before it’s their turn to bowl.