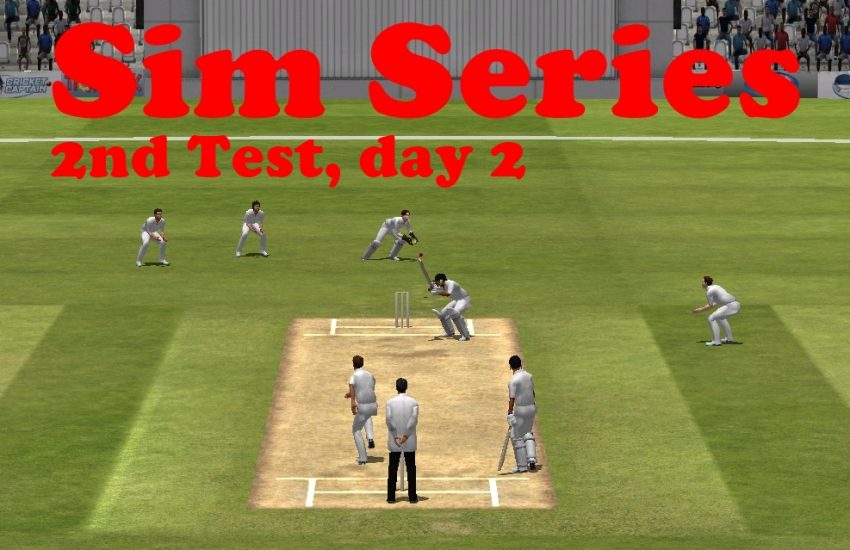 England were wobbling on day one only for Graeme Swann and Graham Thorpe to bring them back towards respectability in the evening session. Just goes to show, it doesn’t matter how you spell your first name, you can still excel at cricket.

England recommence on 271-6. The sun is shining and is forecast to continue doing so throughout the match.

Chaminda Vaas and Lasith Malinga get an over each and then it’s back to spin.

Arjuna Ranatunga positions a man at short cover. Thorpe plays the ball directly to him.

“Yes!” cries Thorpe and the two batsmen set off for a run.

Swann is run out. What the hell was that?

For a while, new batsman Derek Underwood bats brilliantly, but then Rangana Herath starts hitting him in the pads.

It’s not him who falls next though – it’s Thorpe. He plays for the spin against Murali and is LBW to the straight one for 90.

“He was very watchful at the start, but that was a good innings,” says Jonathan Agnew on commentary, offering listeners nothing they didn’t already know. “He’ll be disappointed not to have made a hundred,” he adds, superfluously.

James Anderson hits a four and then Herath finally gets Underwood.

Monty Panesar inside edges his first ball, but survives. Vaas appeals for LBW the next ball he faces, but it’s a no-ball. Jimmy then edges behind for 10.

England made 356, which seems neither here nor there really.

Jimmy’s getting some swing and bowls Sanath Jayasuriya between his legs for 6.

He cleans up Marvan Atapattu too. An LBW appeal against Mahela Jayawardene is turned down.

Derek Underwood replaces Stokes, who wasn’t threatening at all.

After a titanic 10-over spell, Anderson retires to fine leg with figures of 2-12. He is replaced by Swann.

Swann is known for taking a wicket in his first over and Kumar Sangakkara duly inside-edges one – but alas, there’s no-one there. David Gower is hedging his bets a bit with his field.

Underwood gets Jayawardene LBW. He’s creating chances, but at the other end Swann is going for a few. The off-spinner serves up a hideous full-bunger to Aravinda de Silva, who clobbers it for four.

Gower whisks Swann out of the attack after five overs, replacing him with Panesar. Sangakkara’s set now though and the left-armer’s first over goes for nine.

Kevin Pietersen has a token over before tea. Sri Lanka are 105-3.

Gower isn’t pissing about. He starts the evening session with Anderson and switches Underwood to the opposite end.

The ball’s soft now though and Jimmy’s tired. His first over goes for 11. England’s attack lacks depth.

Gradually, he starts to exert a bit of control and delivers a couple of maidens. He’s visibly flagging by his sixth over, however, conceding 13 as Sangakkara tucks in with glee.

Sanga sweeps a couple of fours off Underwood in the next over too and suddenly it seems like England are unravelling like a toilet roll spinning on a holder. It seems out of control; the weight of the dropping sheets increasing the speed of the unfurling by the second.

Gradually, gradually, England get a grip and slow the run-rate. Panesar and Swann tighten things as the batsmen start to think about stumps.

Then de Silva hits the final two balls of the day for four.

The scorecard makes for ugly reading for England. They lead by 131.