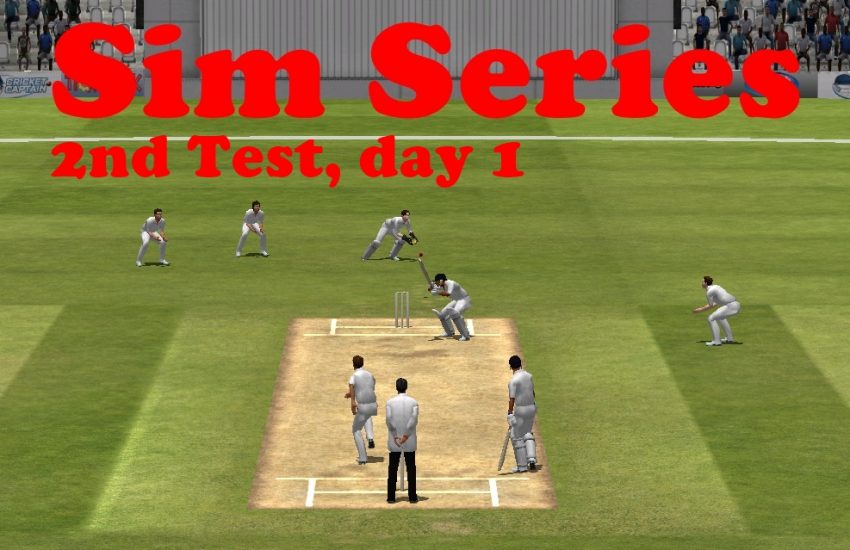 Following the first Test, the Cricket Captain developers offered us a copy of the latest version of the game. However, we promised you all that we’d continue using the 2018 version if they did that. We are being true to our word.

If it ain’t broke and all that.

Alastair Cook and Marcus Trescothick is a more enticing opening partnership than Cook and Wilfred Rhodes – but will it be a better one?

Tres is relatively watchful for the first hour but then Ranatunga brings Jayawardene on second change. Why does Mahela keep getting a bowl? We presumed it was because he was captain in the first Test, but there’s no way he’s strong-arming Ranatunga. It’s inexplicable.

Maybe it’s a devilish ploy to make the batsmen relax because he’s whipped out of the attack after one economical over and Tres is stumped off his replacement, Muttiah Muralitharan.

“Satan’s gonads, he’s a good bowler,” observes Jonathan Agnew on commentary. Or possibly in our imagination.

David Gower starts cautiously, but then plays two immaculate drives off Murali. The first, straight back past the bowler, is a shot we honestly don’t think we’ve ever previously seen in our 25,000 hours of playing Cricket Captain.

He plays the same shot again in the final over before lunch off Chaminda Vaas.

David Gower is really good at batting. We could watch this all day – which is just as well considering our sport-viewing alternatives at the minute.

Cook nurdles a four to square leg and squirts another to third man.

Gower inside-edges Rangana Herath to short square leg for 28, but it is still way more beautiful than anything Cook has done.

Kevin Pietersen does not hit his first ball for four.

Murali bowls Cook for 41. It’s a hell of a delivery.

Cook reacts by looking like he’s involuntarily shat himself.

It’s 95-3 with two new batsmen at the crease. Graham Thorpe opts for gritsy resilience while ensuring he still punishes the bad balls – because he’s Graham Thorpe, and that’s what he does.

Pietersen does nothing for a while and then hits a Murali over for 15 – because that’s what he does.

KP’s LBW to Herath in the next over though. This is followed by a soft, wet ‘schlup’ sound, which is Agnew audibly rolling his eyes.

At this point Graham Thorpe has one run off 25 balls because there haven’t been any bad balls. Stokes is beaten first ball and then punches an off-side four off the back foot.

A few overs later, Stokes hits a Gower-like four. Thorpe is on 1 off 42 balls.

As tea draw near, a Herath over goes for 13 and even Thorpe finds the rope.

Stokes tries to take on Murali a little bit. After a lovely cover drive, he somehow contrives to thick edge an on-drive just in front of point for a one-bounce four.

This is the shot.

Thorpe joins in, flaying the great off spinner straight back over his head for four, but then Stokes edges behind. Murali’s never really out of the game, is he?

With eight overs until the new ball becomes available, Matt Prior comes in and bats busily.

After two fours, he holes out at cow corner off Herath.

Sri Lanka take the new ball, but Swann presses on, caning fours all over the place.

Doesn’t look like it’s much of a pitch for the seamers.

We’ve got a Patreon page if you for some reason feel like you want to help fund this cobblers. It should go without saying that you absolutely should not do this if you’re unable to work at the moment and can’t pay your rent or mortgage. Or if you can think of something better to do with your money for that matter – which you almost certainly can. We suppose what we’re really saying here is don’t fund us via Patreon.