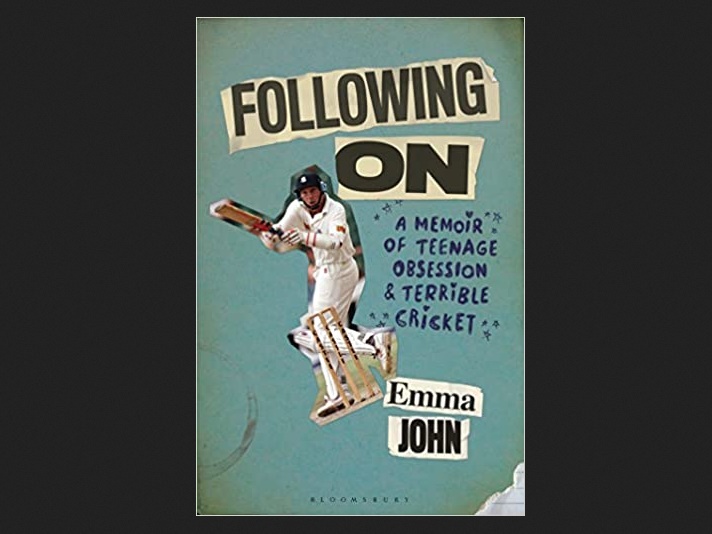 We don’t often review cricket books these days because reading about cricket is not generally what we want to do once we’ve finished reading about cricket for the day. King Cricket reader Hoopy read one though and he sent us a review that he later conceded was, “a little harsh in the cold light of day.”

Life went on, and in 2005 England won cricket. The upshot of this was that some part of my cricket-ness died. Despite that, for each Christmas and birthday my sister bought me a cricket book. Usually a ghost-written autobiography by some bloke who was younger than me who was cashing in while the going was good.

Skip forward to Christmas 2019, an array of presents is laid before me. One of them is a hardcover book. I know what it is… it’s a bloody cricket book, and I harden my heart to look grateful.

Lo and behold it’s a book called Following On. It’s written by a journalist that I’ve sort of heard of called Emma John and it has a picture of Mike Atherton playing a hook shot on the dust jacket. It’s put to one side with the ‘best uncle’ socks and Lynx gift pack, then I cook dinner.

Boxing Day rolls ‘round and I’m mooching about for something to do, so I pick up ‘the book’. I know I have to read a bit at the beginning, a bit in the middle and a bit at the end so I can fully appraise the gift giver on how much I enjoyed it. Observations like ‘I didn’t realise they couldn’t touch cotton wool after they got the hundred at the GABBA’ always go down well, ‘cos lets face it, they’re never going to read this bollocks.

As I read the preface, I pour a large scotch (well, it was past 9.30 on Boxing Day) and read on. By chapter one I’m utterly intrigued. It would seem that she’s roughly the same age as me, she grew up supporting Middleshire, while I supported Lancasex, but there are similarities in our upbringing – although, she’s undoubtedly posher than me.

The best parts of the book are childhood memories. Interaction with parents and siblings are interesting, but the one defining feature which we share/shared is a complete fascination with Mike Atherton.

I suppose, for some reason, I need to point out that I’m heterosexual. I have never fantasised about walking hand in hand along the promenade in Llandudno with an England cricket capta… stop it, bit of a Lewis Caroll moment there.

Emma John is at pains to point out something very similar. She loved Athers for exactly the same reason I did: he was a tough bastard who could withstand Ambrose, Walsh, Waqar, Wasim, Donald, Pollock and, most importantly, Illingworth.

So, the point of the book is that Emma John interviews her Nineties First XI (and I suspect it was the first 11 that agreed to an interview). The whole premise of the interviews was, ‘you were an international sportsman, why was your team shit?’

The first interview was with Alec Stewart. They were meeting at the Oval and Emma makes a big deal about getting up early, ‘cos she knows Stewey is a stickler for punctuality, so she snags a brew at some café and spills it down her front and then gets lost and then I’m thinking they already made Bridget Jones’ diary.

So then in no particular order we get interviews with Jack Russell at his studio shop where they drink tea; Ramprakash where there’s a great preamble about dancing rather than, y’know, scoring 100 first class centuries. Hick, Caddick, Tufnell, Crawley (who was wearing a cardigan). Basically, sports people should never be interviewed because they are intrinsically self-obsessed and boring.

I’ll leave it at that. The book is okay if you’re interested in a slightly quirky kid (very much like me) growing up with cricket through the Nineties. If you’re after an insight into what it was like to be part of the team then it’s probably best left on the shelf.