As rain was forecast for most of the day, Becky and I decided not rush to Manchester. We both arrived at our salubrious Ibis hotel at lunchtime and headed immediately to the ground. Soon the rain returned so we spent the afternoon waiting to see this sign. 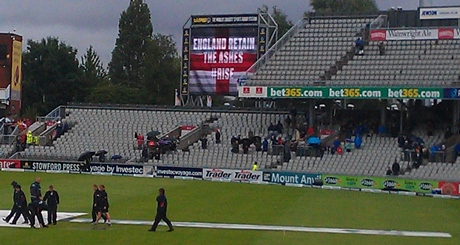 We cheered. Praying for rain gave me a nostalgic feeling for the 90s.

Leaving the ground we headed back to the hotel, showered and changed, and headed into the glittering Manchester evening. After dinner we went into a slightly wanky bar, but I couldn’t be arsed traipsing around. We ordered a very nice bottle of Beaujolais and propped up the bar.

After a while, I needed the toilet. Whilst I was in the gentlemen’s, Becky sent me a text that read ‘Keep your shit together’. Puzzled by this as that’s not normally the reason why you go to the toilet, I returned to the bar to be presented with the scene of KP, Ian Bell and Jonathan Trott sitting at the bar. I calmly returned to my seat.

Obviously, I texted everyone I knew.

Price responded telling me I should tell Trott he needed to pull his finger out and score some runs. After a couple of minutes I caught Trott and Bell’s eye, nodded and raised a glass. They returned the gesture.

Fed up with playing it cool, Becky decided to go and chat to them. I duly followed suit. We were having a polite chat until Becky relayed Price’s message. Jonathan seemed less than impressed. A few moments later, Ali Cook, Tim Bresnan, Graeme Swann and Jimmy walked in and joined us. The evening was going well. We ordered another bottle of Beaujolais.

From then on, things start to go a little bit hazy. I had a discussion with Graeme about Led Zeppelin (he thinks they’re over rated. I corrected him. We agreed that Pink Floyd are very good). I’m sad to report that none of them had heard of/read King Cricket. Ian Bell was completely unaware of the Lord Megachief of Gold title that was bestowed upon him a couple of years ago. This saddened me.  I didn’t get a chance to speak to Alastair. He didn’t stay very long but we did share a nod when we were stood next to the urinals. Tim was as cheery as you’d expect him to be.

I asked Jimmy if he remembered a man dressed as a vagina screaming at him at Headingley. He did and found it most amusing when I told him it was me. He immediately turned to Graeme and said: “You remember that vagina I told you I saw at Headingley? That was him.”

Graeme laughed and I felt somewhat proud that my antics had entered the England dressing room. Jimmy apologised to me for not coming over and signing my flaps and he bought me a drink to say sorry. I accepted his apology. Embarrassingly, I asked him for a photo. One of the bar staff did an excellent photobomb. 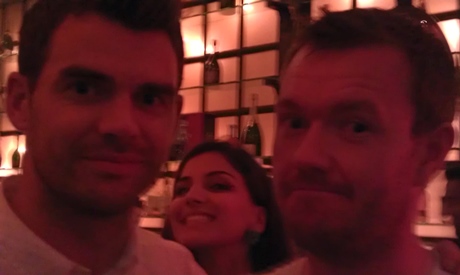 I told them that I had their names as table names at my wedding a couple weeks earlier. Graeme was pleased when I told him I had moved him up the order to number four (I lied). I didn’t tell Jimmy that I had put love hearts next to his name. I didn’t want him to think I was strange.

They decided to leave and Jimmy and Graeme invited us to join them in another bar. Not having any other plans, we accepted this offer.

I don’t remember getting back to the hotel.