It was a grey day in Manchestie when my motley crew headed to Old Trafford for an evening’s Twenty20 – Lankyshire versus Zummerrrrrrzet in a T20 Cup quarter-final. I’d organised a work-subsidised social. Workmate Andy had even brought his mother and two of his daughters along.

We’d all spent the afternoon glued to the weather forecasts with a sense of impending doom.

5pm We got to the creaky old ground and picked out some choice seats towards the long-on side of cow corner. I’d brought some onion bhajis, crisps, bread and cheese (Afterburner – a delectable cheddar with flaked chillies, purchased in rage at Altrincham market after I’d discovered that someone had STOLEN MY DOUX DE MONTAGNE from the office fridge) and lastly, some “interesting” cloudy apple juice that tasted surprisingly like scrumpy.

5.10pm Some people were on the pitch, playing some practice strokes and biffing balls into the crowd. Some old dear got hit in slow motion, despite much shouting. Play was due to start as scheduled. The mascots were out, Lanky Giraffe joined by something called “Stumpy”.

It took us quite some time to work out that Stumpy was in fact a dragon. To go with the Somerset Sabres moniker, we’d expected some sort of fierce-looking sabre-toothed tiger. But no, it was a rather floppy purple dragon. There was also a bright green crocodile, which turned out to be something to do with an U11 team who was there for the day.

5.20pm The umpires and various others gathered on the square… and then the rain started in earnest. Spotting turned to that peculiarly Mancunian light drizzle, which in turn evolved into a refreshing shower… then rain. Proper soak-you-through-from-the-shoes-up rain. 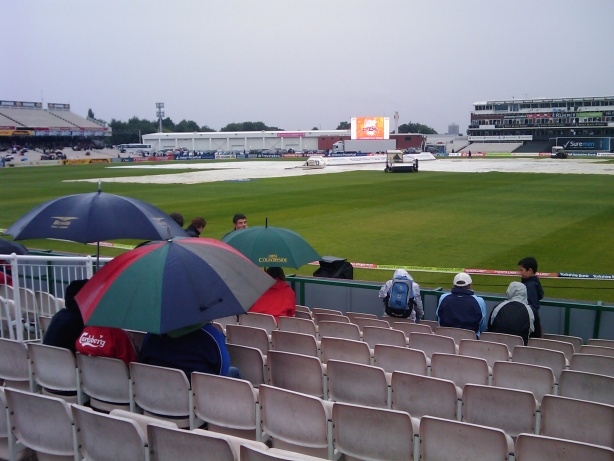 Brollies were up, hopes were down. My two-tier black and white golf umbrella was well and truly trumped by Andy’s mum’s sunflower number. Very cheerful. The folk huddling together in the lower tier of K stand looked smug.

6pm The umbrellas bobbed like sea-tossed beachballs as people left, either for shelter in the bar area, or home altogether. An announcement was made that the latest the match could start was 8.07pm. No sooner, no later. The disappointment was palpable. 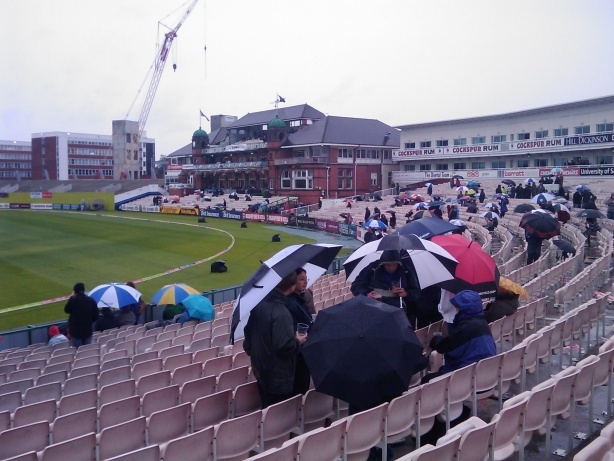 6.30pm By now, we’d had a few beers. And scrumpy. Rollers were being employed to squeeze the water around. When one nipped over to the boundary to get rid of its yellowish watery load, it looked as though its driver was urinating mightily. Andy’s daughters were impressed.

7pm The game finally got called off. We finished our drinks and left. Five of us got a tram into town for consolatory drinks. We’d started, so we may as well finish!

9.30pm (approx) The Waterhouse. Which, we found, would serve us mixed grills at 10pm. Hurrah! £6.99 including a decent pint. Double-hurrah!

11pm (ish) Three of us left, clearly talking rubbish. We staggered home, via tram (Mark) and bus (Mike and I).

All in all, a rather successful evening out.