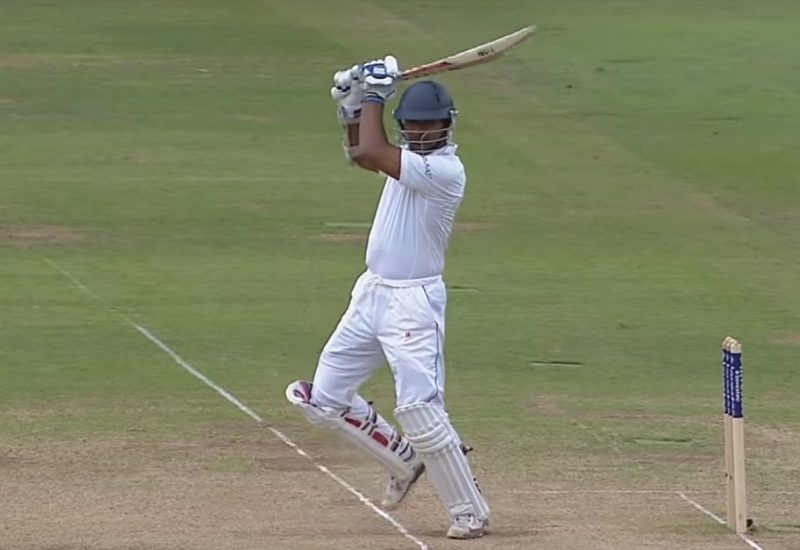 If you want to be highly regarded as a wicketkeeper-batter, one of the smartest things you can do is not actually keep wicket in a whole load of Test matches.

At what point do you become a wicketkeeper? How frequently do you have to don pads and gloves and chunter away relentlessly to be considered a proper specialist in that weird squatty role?

There was a spell a few years back when a bunch of people started referring to Ollie Pope as a wicketkeeper – England selectors mainly.

How do we know Ollie Pope is not a wicketkeeper? Because at the time of writing, Ollie Pope still hasn’t stumped anyone in professional cricket. There are many ways to put together your definition of wicketkeeper, but we put it to you that at least one stumping is a prerequisite.

Maybe if it’s your professional debut and you’re keeping wicket in that game, we can give you a bit of leeway. And we suppose stumpings aren’t always that common, so it might take a handful of matches before you got that first one. But if you’re Ollie Pope and you’ve played over 100 matches as a pro and you’ve never stumped anyone, you are not a wicketkeeper. You are a glove owner.

There have been a few players down the years who have progressed from glove ownership to being fully-fledged wicketkeepers and this is where things get a bit tricksy. Where is the line? What other factors are we looking at?

We don’t want to overcomplicate this. We’d argue there are really just two main, overlapping types of genuine wicketkeeper.

That’s not precisely what we’re digging into today though. Today we’re looking at five players who people widely consider to be Test wicketkeepers, who quite often didn’t actually keep wicket.

Jos Buttler – a Test wicketkeeper 65% of the time

37 matches as keeper, 20 as an outfielder

Despite his memorably pioneering work as a specialist number seven batter, Jos Buttler has actually kept wicket for England rather frequently.

He’s mostly been okay too. Certainly better than some would have you believe. Not brilliant. Not 100 per cent reliable. Bit shonky against the spinners. But more okay than he usually gets credit for. The fact he often gets pushed towards the batter-who-keeps pigeonhole is probably more to do with longstanding wicketkeeping tropes than his actual aptitude for the job.

Weird closing fact: Buttler has way more professional stumpings to his name than either Ben Foakes or Jonny Bairstow. That’s in large part down to the nature of limited overs cricket, but it’s still the kind of thing you might like to post on Twitter next time you’re having a dumb argument with someone about those three players.

Alec Stewart – a Test wicketkeeper 62% of the time

82 matches as keeper, 51 as an outfielder

Stewart is well-known for being the ‘better batter’ option in the Alec Stewart v Jack Russell 1990s wicketkeeping tussle. He’s also a good example of how keeping can sometimes impact a player’s batting.

The Gaffer averaged 34.92 as a wicketkeeper with six hundreds, but 46.70 as a specialist batter with nine hundreds.

For what it’s worth, Russell averaged 27.10 in 54 Tests with two hundreds. We haven’t really investigated this thoroughly, but being as it was the 1990s we know for a fact the various batters who played instead of him definitely didn’t average 39 – which is what was apparently needed to make up the 12 runs the team shed each time it put Stewart on leaping and jabbering duties.

Jonny Bairstow – a Test wicketkeeper 59% of the time

49 matches as keeper, 34 as an outfielder

There are part-time wicketkeepers, occasional wicketkeepers and out-and-out wicketkeepers. And then there’s Jonny Bairstow, for whom being a wicketkeeper is a part of his identity on a level more profound than probably even he understands. England have at times been guilty of not really properly appreciating that fact.

David Bairstow played four Tests for England (which was enough for him to get that all-important stumping). His son has so far kept wicket in 49 Tests.

Bairstow’s record is currently the reverse of Stewart’s. He has averaged 37.37 when playing as England’s wicketkeeper, with five tons; and 30.45 as a specialist batter, with three tons.

Brendon McCullum – a Test wicketkeeper 51% of the time

52 matches as keeper, 49 as an outfielder

Just as a measure of the inaccuracy of some of our perceptions, you probably think of Brendon McCullum as both a wicketkeeper and a captain – yet he played in 100 Test matches when he wasn’t entrusted with both those roles. Captain-keeper was actually something he did just the once, against England in 2013. (Jonny Bairstow also played in that match, but didn’t keep wicket.)

He also kept wicket in 184 one-day internationals, which gives you a pretty good idea why our perspectives can sometimes end up skewed.

Kumar Sangakkara – a Test wicketkeeper 36% of the time

48 matches as keeper, 86 as an outfielder

Jayawardene kept wicket in more Test matches than Sangakkara. That is a 100 per cent true fact that only becomes believable when we reveal that we are talking about Prasanna Jayawardene.

Even so, a surprisingly large proportion of people just didn’t seem to notice that their all-time favourite wicketkeeper-batter only actually kept wicket in a third of the Test matches he played. Granted, that was still a lot of matches, but it does mean that Sangakkara played more Test matches without the gloves than Ian Chappell, Martin Crowe, Denis Compton, Len Hutton and Michael Vaughan. Steve Smith will catch him pretty soon – but he hasn’t yet.

Sangakkara is a rare player whose reputation has been positively burnished by multitasking. Normally any attempt at all-rounderism only serves to double the criticism you attract and this is especially true for wicketkeepers, who are routinely slaughtered for dropping a catch when they’re batting well or for making a duck when their keeping is slick and polished. Sangakkara, in contrast, is falsely perceived as a man who made dozens of Test hundreds while playing as a wicketkeeper.

Don’t get us wrong – his record is extraordinary. But of his 38 Test hundreds, only seven came in matches when he was wicketkeeping. His impressive batting average as keeper (40.48) also soars to an outright ludicrous 66.78 when he played as a specialist batsman.

People think that the impressive thing about Sangakkara is that he made so many runs when he was a wicketkeeper. The far more incredible feat was just how many he made when he wasn’t.

Thanks, as always, to the rock solid, thoroughbred, solid gold, dynamite legends who are funding this site via Patreon. More info on how that works here. (The short version is the more backers we get, the more time we can spend on the site.)

It’s an entirely free website though. You can find all our previous features here. And you can sign up to get new stuff emailed to you here.