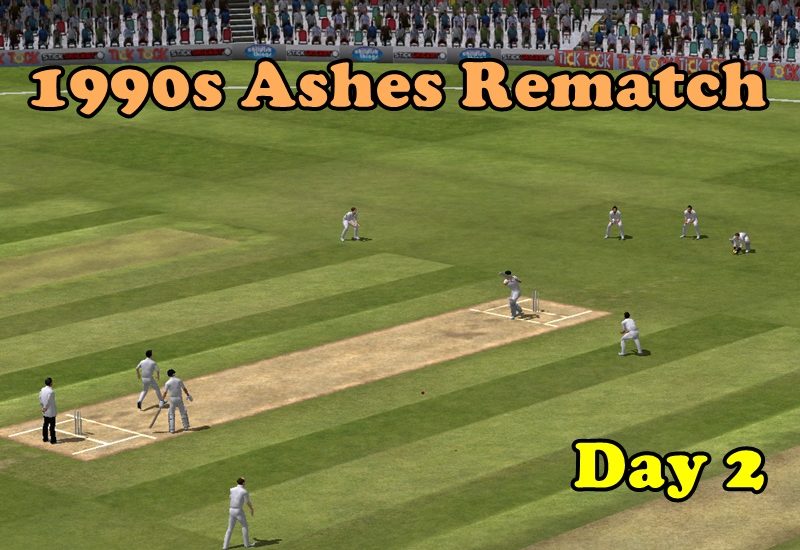 Nasser Hussain was cautious and intense in yesterday’s evening session, while Graham Thorpe was cautious and determined. Will they look to press on a bit on day two? And will Mark Taylor ever give Michael Bevan a bowl?

After 13 overs of intense singles and even more intense dot balls, Hussain shows increased intensity and pulls a four off Brendon Julian.

Julian’s only bowled 11 overs compared to 28 from Damien Fleming and 31 from Paul Reiffel. He’s barely conceded a run, so that seems weird.

Hussain reaches 50. He raises his bat. He looks intense.

It was another session for that purely theoretical group of people, “the purists”.

After facing 188 deliveries, Thorpe lets his hair down with an efficient cut for four off Colin Miller.

Two overs later, he hits another. In the air.

The two batsmen start to look a little less robotic and with 25 minutes left to go in the session, Hussain canes two fours in an over off Miller to reach his hundred.

It’s been an intense innings. The Australian crowd goes wild with indifference.

Hussain is batting positively though, hitting fours semi-regularly. A run-out chance is the best Australia can muster and the bowlers are starting to look tired.

There must have been espresso available during the break because Thorpe lollops a trio of fours after the players re-emerge.

Then he lobs Fleming to Julian at long-off for 71.

Robin Smith will surely up the run-rate. He gets a very quick sighter before Australia take the new ball. It’s 371-4.

Hussain’s playing beautifully now, but Smith seems to have been infected with Thorpe-itis. Is this pitch tougher than it looks? We definitely feel like an “it’s a bit two-paced” comment is on the cards in one of the close of play interviews.

Proving that he is actually who he claims to be, Smith hits a thundering square drive. England pass 400.