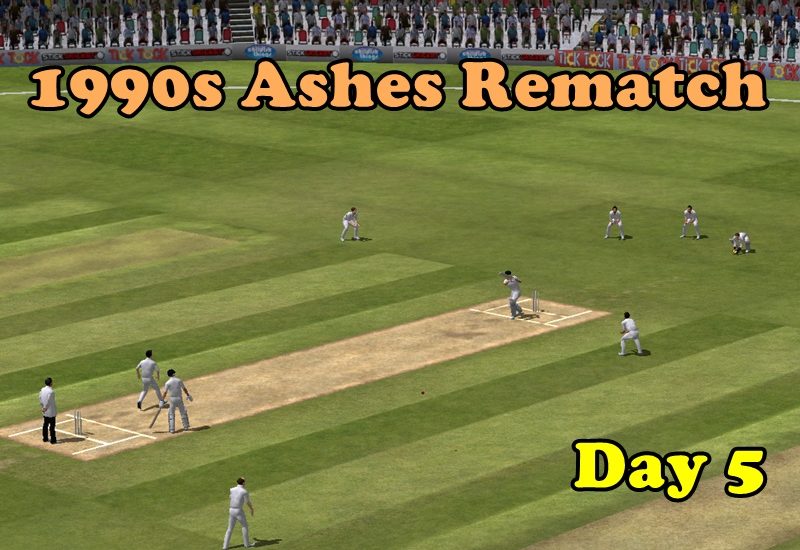 We’ve done some pretty pointless things in our time, but playing out the fifth day of this match and then writing about it is unquestionably the most pointless today.

As we resume, Steve Waugh is on 120, Ian Healy is on 8. England will need to take 15 wickets and also score some runs if they’re to win. Considering we’ve seen an average of 2.5 wickets a day so far, that isn’t going to happen.

Australia could have a bit of a slog and then hope to bowl England out, but that probably isn’t going to happen either.

Let’s get this over with.

Ian Salisbury bowls the first over because that’s where we are now. The most exciting possibility here is that Ian Salisbury might take 5-200.

No… they couldn’t… could they?

In Gough’s next over, Healy edges over the slips for four and then edges again, this time straight to Jack Russell.

What the flying figjam is going on this morning? Why couldn’t Gough – or indeed anyone – have done this a couple of days ago?

Brendan Julian and Paul Reiffel are at the crease.

With the last ball of his fourth over, Gough slams one into Reiffel’s pads. The umpire’s finger dangles limply for what feels like an hour before unexpectedly pinging into the air.

We’re half an hour into the final day, Australia are eight down and still 108 behind. All around people are doing mathematics.

Second ball he finds Reiffel’s edge but it hits Graham Thorpe in the chest before he can get his hands anywhere near it. That’ll be Gus’s extreme pace, that will.

It doesn’t matter. Two balls later he has his man LBW.

Gus bounces Colin Miller first ball and hits him in the chest. He appears to have been possessed by the ghost of Frank Tyson or something.

Fraser beats Miller more times than we can count before eventually getting him caught behind.

Australia are all out, 70 behind.

There are 40 minutes until lunch. England need to bat about six times as quickly as they did in the first innings if they’re to have even the flimsiest chance of winning this.

Mike Atherton hasn’t seen fit to promote anyone instead of himself. He walks out with Alec Stewart.

Oddly, at lunch it’s Stewart who’s the laggard, while Athers has hit an actual six. (Well, he’s mishit one – but it still counts.)

After soup and sandwiches, Athers continues to be the more confident of the two. Stewart is really, really struggling to lay bat on ball.

After half an hour Atherton edges to slip and Chris Lewis walks out, ready to deploy the long handle.

Finally Stewart gets going, but the decision to promote Lewis doesn’t seem justified.

He top edges a sweep straight back to Miller for a run-a-ball 10.

Hussain looks better than anyone. Suppose he’s seen more of this pitch than anyone. He hits Miller for four fours in an over, at which point Atherton calls his men in.

There’s just half an hour to go until tea. Australia need 228 to win. England need 10 wickets.

Gough opens along with Fraser. Neither takes a wicket before the break.

Salisbury replaces Fraser and Gough switches to the other end.

It’s the leg-spinner who gets the breakthrough – Mark Taylor adjudged LBW for seven. With just 1h40m to go, it’s almost certainly too little too late.

Lewis replaces Gough and Salisbury has Michael Slater caught behind.

There’s 1h20m to go. Maybe spin is the better bet.

Oh! Chris Lewis bowls Mark Waugh with the first ball of his second over.

AND THEN STEVE WAUGH INSIDE-EDGES HIS SECOND TO HUSSAIN AT SHORT LEG!

The Barmy Army do the bowler-running-in-crescendo-roar thing.

Michael Bevan plays the safest forward defensive stroke you have ever seen in your life. That was a bit of an anti-climax.

Lewis has another good LBW shout in his next over. He’s bowling at the stumps and letting the crumbling pitch do the work.

But the appeals peter out. There are now 45 minutes to go and there have been no further wickets.

Bevan pulls a couple of fours and we’re nearing the last half-hour.

Athers makes a double bowling change. Gough comes back – obviously – and rather more surprisingly Graeme Hick comes on at the other end. It is turning. Maybe it’s worth a punt.

There’s a huge, huge, huge, huge appeal from Gough for LBW against Greg Blewett. The Yorkshireman crumples to the floor when it’s not given, a beaten man, and then knocks out middle two balls later.

And that’s the last of it.

Chris Lewis was in the Waughs, Mike Atherton played the greatest cricket shot in history, but it’s Nasser Hussain who’s man of the match.

We’re actually pretty deflated by that.

With hindsight, Graham Thorpe’s 255-ball 71 feels almost actively counterproductive. But then things definitely seemed to accelerate on the final day to the extent that it was only really in that final session that batting seemed at all a challenge.

Frankly, we blame the Kookaburra ball.

This nonsense is made possible by all the people who are funding King Cricket on Patreon. If you like what we’ve been doing and you’d like to see us to do more, please feel free to chip in a very small amount. (Seriously, don’t pledge too much because we’ll only feel like we’re letting you down.) You can flip us a shiny coin or buy us a pint each month here.