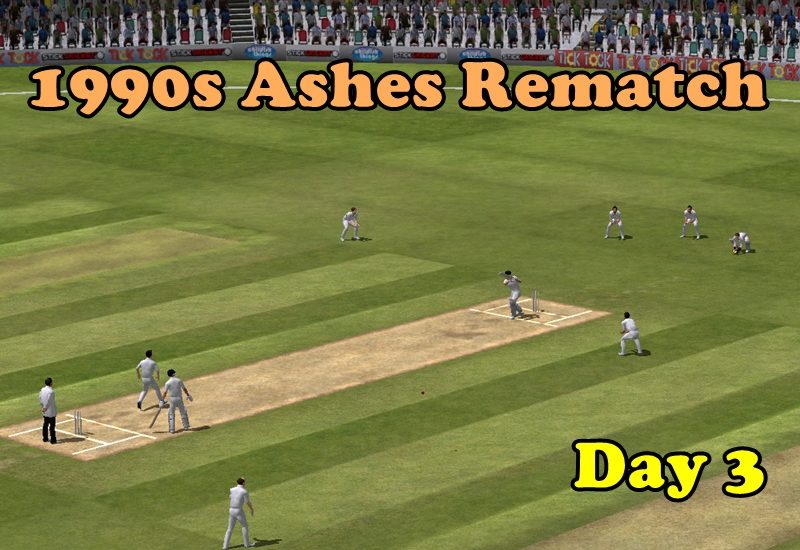 Day two ended with England 413-4. Nasser Hussain is unbeaten on 145 having batted through the day. Robin Smith is on 22. Mark Taylor still hasn’t given Michael Bevan a bowl.

After much talk about declarations on commentary (Shane Warne thinks Michael Atherton should have declared halfway through day one), Damien Fleming gets play underway. He’s bowling his 47th over.

Paul Reiffel, bowling his 50th, is on at the other end. He beats Smith outside off.

Hussain reaches 150. He stands still to celebrate – but it’s an intense kind of motionlessness; the kind that says motion will eventually follow.

Smith unleashes a titanic square cut for four. Keep doing that, Judge. England need to up the run-rate.

Smith does indeed keep doing that. Does he know that there’s a leg side?

Smith reaches 50, but all-in-all it’s a confusingly slow one given the match situation.

The Australia players give him zero claps.

Michael Bevan comes on to bowl Australia’s 204th over. Hussain hits him for four to move to 184.

Smith, meanwhile, has discovered the other half of the field and in so doing doubled his scoring rate. England pass 500. Atherton’s surely only waiting for Hussain’s double before declaring.

Smith seems to have forgotten there’s an off side now.

You’ll note that Bevan’s over was the only one he got.

Reiffel’s first over after the break goes for 11. Looks like we’re into the final throes of this innings now.

Hussain’s on 194. But Smith’s on 86. Might Athers might be tempted to let him get a hundred too?

Two overs later, Smith reaches three figures. England are 554-4 and that, surely, is that.

But no, Atherton lets them bat on. Bit of psychology maybe. The Aussies look utterly miserable.

Hussain has run to a standstill though. He is caught behind off Miller for 207. Athers calls them in.

Miller’s figures are… not great.

There’s about 50 minutes to go until tea.

Angus Fraser takes the new ball from the other end. Taylor takes another single.

The hairline rather implies this is late era Fraser.

In the last over before tea, Fraser has a decent shout for LBW against Michael Slater, who was man of the match in the last 1990s-est Test match.

Other than that, the batsmen have been almost entirely untroubled.

Chris Lewis starts after the break and tries a couple of short ones.

Fraser continues at the other end.

Lewis is going for plenty. Slater hits him for consecutive fours but then cuts one towards gully where Alec Stewart takes a fantastic diving catch. England have gained a good outfielder as well as a better keeper.

We spoke too soon. Jack Russell is one of a great many people who didn’t anticipate a Fraser bouncer and he concedes four byes. Stewart surveys events with clench-jawed neutrality.

Lewis’s next over goes for 13. They’ve got a big lead, but England are over-attacking here.

In a bid to stall the run-rate a little, Atherton turns to… Ian Salisbury…

Salisbury turns one past Greg Blewett’s outside edge first ball. That was pretty handy.

Australia reach 100, in large part thanks to Lewis, whose wicket increasingly looks like a fluke.

Athers brings Hick on. It’s spin at both ends.

Salisbury’s going for a few, but he’s creating chances. A Taylor sweep lobs to mid-off where Stewart makes no mistakes.

With only 12 minutes to go, Mark Waugh joins Blewett at the crease. No nightwatchman for Junior.

Gough comes back to fire in a couple of overs of yorkers before stumps.

Waugh clocks him for four.

Utterly bizarre to say this, but it looks like Ian Salisbury will be the key man. He was really quite good this evening.