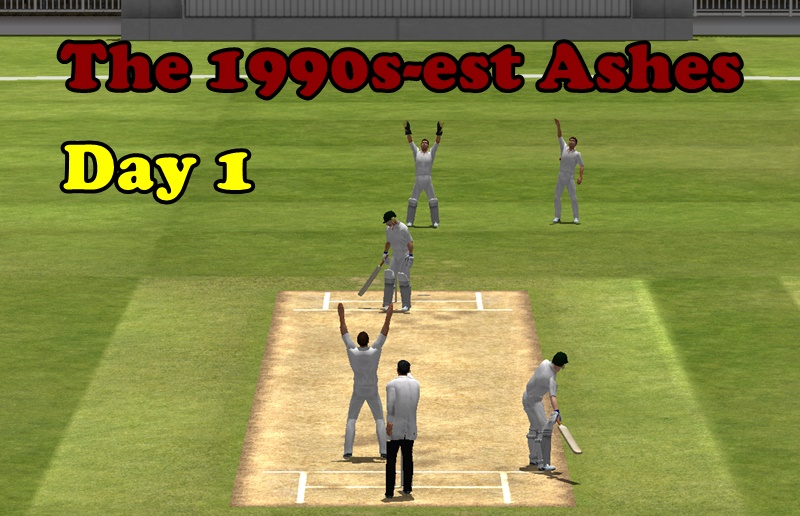 The match is being played in England because that’s what we decided.

If you think that gives England an advantage, consider (a) what happened in the Ashes during the 1990s (Australia won every series, home and away) and (b) Australia’s bowling line-up for this match – Brendon Julian, Paul Reiffel and Damien Fleming constitutes a pretty English-style attack.

It’s worth emphasising at this point that these very obviously aren’t Nineties best XIs. Our aim was to pick the 1990s-est XIs, which is a subtly different thing. That explains how Australia ended up with those guys instead of Shane Warne, Glenn McGrath and the like.

All the same, it has to be said that Australia’s batting is rock solid (you can see the teams below). You’d have to have them down as favourites on that basis alone – particularly when you consider that England’s batting is flaky as hell. Their top order’s vulnerable, their middle order’s soft and they have a ridiculous tail. The batting’s Atherton and Stewart, basically.

But it’s a one-off match. Anything can happen. Let’s get started.

Australia decide to have a bat.

The weather looks pre-tty, pre-tty good for all five days, by the way, so can’t imagine this’ll be a draw.

Devon Malcolm and Alan Mullally share the new ball. Devon opts for short and straight. Mullally opts for nine miles outside off stump.

After five overs, Devon’s utterly shagged-out and Mark Ealham comes on for some dobble.

Barely an hour in and this is the field.

That’s not going on to hit middle, by the way, that’s going straight back over Ealham’s head for four.

Oh, wait. Two overs later Mark Taylor makes as if to pull, but then doesn’t really and therefore manages the unique feat of being late on a Mark Ealham delivery. The stumps are splattered.

Then – what fresh madness is this? – Greg Blewett plays across an Irani delivery. Agnew says he was clean bowled, but it was anything but clean. Round the wicket, aimed at leg stump – perhaps even missing leg because it might have come off the pad – this was about as filthily bowled as it’s possible to be.

Blewett was also late on the delivery. You can’t say the batsmen were beaten for pace. It’s more like they had so much time to think their brains fused.

Mark Waugh edges Irani, but there’s no fielder. Phil Tufnell then comes on for a couple of overs before lunch, but gets wellied by Michael Slater.

At lunch, Irani – Ronnie bloody Irani – is the pick of the bowlers. He’s persisted in bowling round the wicket to right-handers and has continued to cause completely inexplicable problems by doing so.

Malcolm returns after lunch and he does beat Mark Waugh for pace. The stumps are spread again.

Slater reaches his fifty, but Ealham, Mullally and Irani keep things pretty tight for most of the rest of the session.

With around 20 minutes to go, Malcolm and Tufnell come back on.

Tuffers is really getting some tap.

In an ostentatious display of lack-of-intent, England resume with Ealham and Irani operating in tandem.

Slater reaches his hundred and does that over-exuberant, running, leaping punch thing. Everyone in the ground sits and stews and fantasises about punching his lights out.

Steve Waugh gets stuck into Ealham a bit, so Athers decides to let Graeme Hick have a short spell before the new ball. Slater greets him with a couple of fours. His second over’s a little tidier though.

Tuffers returns at the other end. The field spreads in anticipation. After four dot balls, Waugh drives and sweeps a pair of fours.

Credit to Athers though, he keeps The Cat on and in the next over Waugh gets on the back foot and punches one straight back to him. It’s a loopy, floaty chance that even Tuffers can’t shell. It’s 238-4 and the new ball’s due in 10 overs.

Things go pretty quiet. Tuffers beats Michael Bevan with one that turns about a foot. That’ll worry England with Shane… no, wait – Australia have gone with Colin Miller! That won’t worry England at all.

Tuffers hits Bevan on the pads. There have been two runs and two chances in the last five overs. Athers decides to give Hick and Tufnell another over each. There’s still 35 minutes to go, so England will get two bites with the new ball.

Hick concedes 10. Tuffers finds the edge, but it goes through point, where there’s no close fielder.

Malcolm takes the new ball. Opting for a fuller length, he concedes 13.

At the other end, Mullally accidentally angles one towards the stumps. Utterly taken aback, Slater is bowled through the gate for 151.

Malcolm greets Ian Healy by reverting to bowling at the batsmen’s faces.

Ealham and Irani did a better job than expected, but things could have really got away from England if Tufnell hadn’t got his act together in the evening session. As it is, Australia will be content, but probably no more than that.

Thanks to everybody who’s currently funding King Cricket on Patreon. Your pledges allow us to do nonsense like this. If you’re not currently a King Cricket patron and you’d like to see us do more with the site, you can flip us a shiny coin or buy us a pint each month here. Don’t feel you have to, but huge thanks if you do.