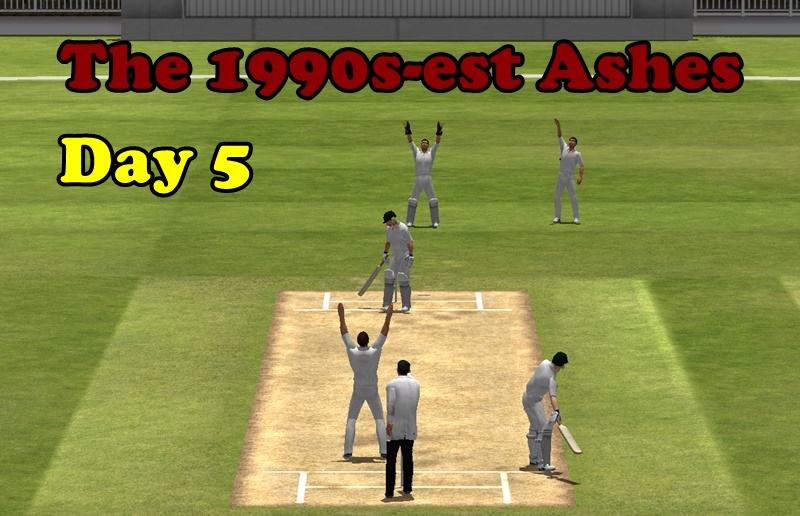 Mike Atherton and Nick Knight walk to the crease. The sun is shining, the pitch is a mess.

There’s a big, big, BIG LBW appeal against Atherton off Paul Reiffel in the third over of the day. It’s not given. Athers just stands there, leaning on his bat, like it’s no big thing.

Then he cuts Reiffel between second and third slip.

The man has bigger stones than Makka Pakka from the Night Garden (who, now that we think about it, doesn’t actually have especially large stones, despite his very obvious affection for them).

Mark Taylor has set this field…

… so when Knight inside-edges one off Reiffel, it goes to hand.

Graeme Hick walks to the crease.

Hick starts cutting and Athers seems to be almost enjoying himself, but chances are cropping up with grim regularity.

Brendon Julian gets the England captain LBW with a full one.

Mark Ramprakash walks to the crease. He looks nervous.

Hick square drives Fleming for six and Taylor spreads the field a little.

Two sessions to go and England have eight wickets in hand.

Taylor drops Hick at slip off Colin Miller. The bowler sulks. You might say he is in a funk.

Hick edges Miller to Taylor for 69.

Alec Stewart marches in. (‘Marches’ is of course the correct verb to use to describe Stewart’s approach to the crease. You could maybe also get away with ‘struts’.)

Stewart plays all around a Miller straight one.

Michael Bevan is having a bowl now and Aftab Habib edges him to Taylor, who is a busy, busy man at the minute.

Ronnie Irani plays across a Bevan googly and is extremely lucky to survive the LBW appeal. Jonathan Agnew does that whistling inhale thing that means it was close.

Irani whops a couple of fours off the same bowler in the final over before tea.

One session to go. Five wickets in hand.

Do England dare to dream? It’s going to be a looooong session. Or possibly with that tail a very short one.

Ramprakash reaches his 50. More importantly, he has survived 162 balls. It’s a fourth innings ball hundred. Hick made one too.

With an hour to go, Australia take the new ball.

Irani continues to play shots, but with the ball four overs old, he is caught behind off Reiffel having faced 66 balls.

Mark Ealham arrives. He is batting at eight, but Australia will justifiably be viewing him as the final wicket.

With half an hour to go, Taylor is offering Ramprakash singles and crowding Ealham with fielders.

Reiffel gets one through Ealham’s defences and it’s farming the strike time for Ramps. There are 28 minutes to go.

It’s about an inch from a fielder.

But then an over later, it happens. Trying to engineer a single off the final ball of the over, Ramprakash edges behind. He had faced 203 deliveries. A double ball hundred.

Ramps’ departure means that Mullally, Devon Malcolm and Phil Tufnell have 20 minutes to survive. On the balcony, Tuffers looks like he is going to melt into his chair and never reform into a human being ever again.

Mullally plays out a Reiffel maiden.

Just look at him making a big show of leaving this one that wouldn’t have hit a fourth set of stumps.

Or maybe he just really missed it.

In the next over, Devon Malcolm tries to cut Brendon Julian despite the match situation and the presence of three slips because apparently Devon is actually insane. He succeeds in finding the hands of Mark Waugh.

Tuffers is in. There are 14 minutes to go.

Michael Slater is player of the match, which is fair enough, but also infuriating.